For many of us the old time music bug first bit back in the late '50s / early '60s when we heard the recordings of The New Lost City Ramblers reproducing the sounds of the old bands and/or the re-issues of the original recordings on the Harry Smith Anthology.

With the split of the original Ramblers Tom Paley came to Europe and continued to spread the gospel while John Cohen and Mike Seeger went on to investigate the whereabouts of older musicians who might still be around down South and came up with several.  Probably the most notable of these being Roscoe Holcomb and Doc Boggs, both banjo players (primarily banjo but also guitar in Holcomb's case).  Following the example of Cohen and Seeger, it wasn't long before a number of others joined the trek into the mountains searching out some of the older musicians in order to record their material and learn their techniques.  Probably the most well known of these 'discoveries' and a man whose influence on banjo players and particularly fiddle players is still very much in evidence at old time pickings sessions on both sides of the Atlantic was Tommy Jarrell of Toast, North Carolina in the foothills of the Blue Ridge Mountains.  Many people beat the path to Tommy's door to learn first hand at the feet of the master and as a result much of his material is available on vinyl, CD and video.

Another man who wasn't recorded commercially but who was also to have a great influence on fiddle players was West Virginian Henry Reed.  Unlike Jarrell however Reed was not visited by a large number of enthusiasts but mainly by one man who fortunately did a great job of recording and studying directly from him ensuring that his tunes were preserved for future generations. 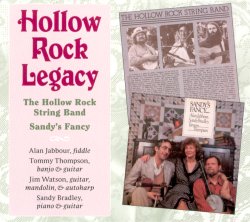 Alan Jabbour is the man responsible.  Whilst studying in North Carolina in the '60s he made several visits to Reed at his Virginia home to where he had moved from West Virginia.  Jabbour taught the tunes to several of his colleagues at University in North Carolina and subsequently formed a group the Hollow Rock String Band.

The original band consisted of Jabbour on fiddle Tommy Thompson on banjo, Bertram Levy on mandolin and Tommy's wife Bobby on guitar.  This was the line-up that recorded the first album under the Hollow Rock name.  That was on the Kanawha label which was issued in the UK on the Matchbox label.  That record alone was enough to fire up the interest of old timey string band enthusiasts in the tunes of Henry Reed.

The next Hollow Rock album was issued in 1974 on the Rounder label and is re-issued here as part of this two CD set.  The line up this time is just a trio; Jabbour, Tommy Thompson and Jim Watson, Watson playing mainly guitar but also autoharp and mandolin, Bobby having sadly passed away in 1972.  At this time Tommy and Jim were also members of the Red Clay Ramblers another string band which grew out of the scene around the university in Durham, NC.

The first thing that hits me whenever I play this album is Watson's crisp, punchy 'right on' guitar on the opening track giving such a solid foundation to the fiddle and Thompson's so-clean driving banjo playing.  That and his (Watson's) mandolin work on West Fork Gals, but the playing by all three musicians here is superb.  The instrumental line up changes on one or two tracks with Watson sometimes picking up the autoharp or mandolin where Thompson will then play guitar.  Shady Grove is fiddle and banjo only and is perfect while British Field March is a fiddle solo.

The second CD in this set is a re-issue of the 1981 Flying Fish album Sandy's Fancy, again it's a trio setting with Jabbour as always on fiddle, Tommy Thompson again on banjo and guitar and Seattle's Sandy Bradley on piano and guitar.

My first reaction on putting this disc into the player was a sense of satisfaction that the first two tracks had been labelled correctly this time.  The original vinyl issue had them transposed.  I have a very distinct memory of one of our Sunday pub sessions some years back where a fiddle player announced Shoes and Stockings only take off into Johnny Lover's Gone; just another way for fiddle tunes to get re-named.  This tune also known as John Lover and John Lovyer and probably one or two other variations is a particular favourite of mine.  It is basically a very simple tune but an ideal example of the type of tune that gets you into a hypnotic roll after a few runs through.  Old time session pickers will know exactly what I mean.  The use of piano here makes a nice variation to the sound of the first disc in the set giving a slightly fuller bass and naturally is less crisp than the punch of the guitar, although I must say that Sandy is no slouch on the guitar either when she gives the piano a rest.  Tommy Thompson is as good as ever.  I can't honestly think of another banjo player that can re-create his style.

There are a couple of tune duplications here; Schottische and Peekaboo Waltz but with of course a different line-up.  Shootin' Creek also appears on both discs but whereas on the first disc the source is Henry Reed on this disc the main influence is from a fellow West Virginian Oscar Wright and others.

A total of 35 tracks on this double set, 25 of which come directly through Jabbour from Henry Reed.  Other named sources are John Lewis, Frank 'Doc' Wright, Glen Smith, Taylor Kimble, etc.

Bearing in mind that both albums were first issued so long ago and the influence that they had on the string band world, I guess most enthusiasts will already know many of these tunes, but if you haven't yet heard them played by Alan Jabbour and his friends then I can't recommend this issue highly enough, it really is old time string band music at it's best. 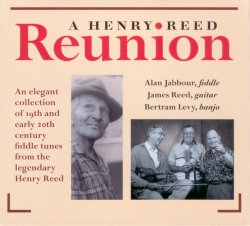 In 1996 Dean Reed, son of Henry Reed, began hosting a Labour Day musical week-end at Rich Creek, Virginia.  Alan Jabbour, Henry Reed's most devoted follower, of course is a regular visitor and began playing with another of Henry's sons, James Reed.  Although James plays both fiddle and guitar, on this recording he sticks to the guitar using what his father taught him were the 'right' chords.

In the year 2000 Bertram Levy the only other surviving member of the original Hollow Rock String Band joined Alan on his annual Labour Day visit.

In the year 2001 Alan and James were at the 25th Festival of American Fiddle Tunes which is held in Port Townsend, Washington State.  Bertram Levy lives there where he practices medicine but is also largely responsible for organising this fiddle-centred event.  The three musicians took advantage of this reunion to get together and record the 21 tunes on this album.  Levy plays mainly banjo here instead of his previous role on mandolin but he also picks up the concertina for three tracks.

James Reed's guitar isn't quite as punchy as Jim Watson and likewise Levy's Banjo is not quite as hard driving as Tommy Thompson.  Nothing wrong with that, just a slightly different technique.

Four titles on this album also appear on the above double album but with different line-ups and of course a few years between them that's not a problem at all.  One tune that will be of interest to the fiddle players that have heard earlier recordings of Reed's tunes is Quince Dillion's High D.  A two-part tune which Jabbour learnt from Henry Reed.  Since playing with James he discovered that Henry in fact also used to play a four-part version.  James taught this to Jabbour and that version appears here

Jabbour's original recordings of Henry Reed and more information are also available on line, details of which are included in the notes of this album

These excellent albums are an excellent tribute to some wonderful musicians, Henry Reed, Alan Jabbour and the late Tommy Thompson.  Jabbour deserves our thanks and support.

If you are unable to get these albums from your regular supplier they are available direct from either: jabbour@myexcel.com or levybutler@olympus.net