An Untamed Sense of Control

Oh, but this is wonderful!  The title comes from a quote by Bob Dylan, 'Roscoe Holcomb has a certain untamed sense of control which makes him one of the best'.  One of the best?  Come off it Bob.  This guy was the best!  And this album is as good as it gets. 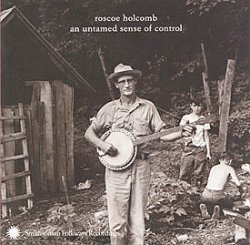 I am sure that Roscoe needs no introduction.  His recordings on two previous Smithsonian-Folkways sets, Mountain Music of Kentucky (SF CD 40077) and The High Lonesome Sound (SF CD 40104) are testaments to his greatness.  Now we have the cream on the topping.

Any number of people have tried to analyse just what it was that made him such a good performer.  Was it his intensity as a singer, his voice straining on all those forced high notes?  Was it the driving banjo, or the open-tuned guitar plying relentless notes behind that remarkable voice?  Or was it rather that he was the total embodiment of all those varied facets that make up what we call the Appalachian style of music?  Sitting here listening to Roscoe's voice working its way through the Frank Hutchison classic Coney Island it hardly seems to matter.  No matter what the source of Roscoe's songs and tunes, they were his songs and tunes.  And they were sung and played by a man whose whole life, his total experience of life, sparkled throughout his performances.  Many people listening to Roscoe only heard the sound of pain and suffering, but I think that they were missing something.  John Cohen, who has assembled this collection, gives the following quote from John Hartford, 'See, I really love Roscoe Holcomb's sound.  These other people tell me I'm hearing all this pain and all this stuff - but that's not what I think of.  I can't tell you what I feel - I just love it.  Maybe there's some deep psychological reason going on that I don't understand with my limited hillability.' Roscoe's music stems from a number of factors.  It is rooted in the hard life that he was forced to endure in the mountains of eastern Kentucky.  It takes in the traditions that were all around him, the old ballads and love-songs, the Baptist hymns and chants, the blues 78s that were played on treasured Victrolas, performers on the radio.  But, whatever the source, Roscoe's singing was, as I said, his and his alone.

An Untamed Sense of Control comprises recordings that were first heard on a number of old Folkways LPs, together with some 'new' material that is previously unissued.  Versions of some songs, Across the Rocky Mountain, Graveyard Blues, Single Girl, Black-Eyed Susie, Hills of Mexico, True Love and Coney Island have appeared on the CD Mountain Music of Kentucky, but the recordings heard on this new CD are later versions of the songs.  Unlike The High Lonesome Sound CD, there are no Old Baptist hymns on this CD.  There are, however, a number of old-time love songs, such as Born and Raised in Covington, Fair Miss in the Garden and True Love, and several songs that can be traced to old 78s from both black and white performers.

Born and Raised in Covington is a version of The Boston Burglar sung to a tune that seems to be a cross between one used for the song Jackaro and another, slightly similar, tune that is used to carry Young Emiley/Edwin in the Lowlands Low.  It is a splendid recording and it comes as a shock to be told that Folkways almost lost the recording!  For some reason Roscoe's Covington reminds me of Doug Wallin of Sodom Laurel, NC, who sang both Jackaro and Young Emiley/Edwin in the Lowlands Low.  Fair Miss in the Garden is, of course, the well-known broken-token song that has spread throughout the English-speaking world, and True Love is a version of the broadside ballad Oxford City/Poison in a Glass of Wine.  We may also say that Across the Rocky Mountain is based on British broadsides, possibly a combination of The Girl I left Behind and one of those songs where the girl goes to seek her truelove on the battlefield; but, in truth, it has undergone considerable change, both textually and emotionally, and could now be more accurately considered as a blues-ballad.

When I first heard the old Folkways LP The Watson Family (now reissued on Smithsonian-Folkways CD SF 40012) I was struck by the number of songs that Doc Watson had learnt from old 78s.  And it is the same with Roscoe Holcomb.  Graveyard Blues was recorded by a number of female blues singers in the '20s, including Bessie Smith.  Mississippi Heavy Water Blues comes from a 1927 Barbecue Bob recording and Milk Cow Blues (played as a banjo solo) is, I guess from Kokomo Arnold's 1934 recording, but it was also recorded in the '30s by Uncle Dave Macon's sidekicks, Sam & Kirk McGee.  Although Sitting on Top of the World was recorded in 1930 by Sam Chapmon & the Mississippi Sheiks it was also recorded by any number of white musicians, including The Scottdale String Band, Milton Brown & His Musical Brownies, The Shelton Brothers, Bob Wills & His Texas Playboys and Riley Puckett.

Other songs were recorded in the '20s and '30s by white performers.  Roscoe clearly liked songs that had been sung by Frank Hutchison.  His versions of Hutchison's Coney Island and Train that Carried my Girl from Town are included on this CD, and the instrumental Knife Guitar carries more than a hint of Hutchison's guitar playing.  Single Girl is not so much the version recorded by the Carter Family, as one would possibly expect, but is rather similar to the version recorded by Rose Maddox.  Again, where to place Little Maggie?  Is this from Grayson & Whitter's 1928 recording, or from a later bluegrass set by, say, the Stanley Brothers?  Grayson & Whitter also recorded Willow Garden (in 1927), but then so did J.E.Mainer in the '30s and Charlie Monroe in the '40s.  Most performers play this piece as a waltz, but not so Roscoe Holcomb who seems to weave the melody to his own beat, playing the song somewhere between old-timey and bluegrass music.  It would also seem possible that another performer, Dock Boggs, could have influenced Roscoe's music, both Darling Cory and I Ain't Got No Sugar Baby Now being similar to versions that Boggs recorded in the '20s.

There are also some lovely instrumentals included here.  Coal Creek was recorded at a party in Seattle when Roscoe was on tour with Mike Seeger.  It seems that this was the only time that anyone heard him play the piece, which is similar to the one recorded in the '30s for the Library of Congress by Kentucky banjo-player Pete Steele.  Barbara Allen Blues, played on the mouthorgan, combines an old-time melody with just about as many blues notes as possible, and Rock Island Prison is something of an oddity, being played on the fiddle - the only tune that he was ever recorded playing on the fiddle.  Is it, I wonder, related to the song Going to Rocky Island that Grisby & Young sing on Mountain Music of Kentucky, but which is sung at a far faster rate?

At one point in the accompanying booklet John Cohen has this to say about Roscoe, 'Over the years I knew Roscoe (1959 - 1981), his health got worse and worse.  He always was a worried man, concerned about the lack of employment and his own physical deterioration.  He felt compelled to explain the hardships of his life before every performance, making excuses for his inability to do as well as he hoped and that “he'd do the best he could”.  The unrestrained force of his performance reached across the limits of his strength.  It was always a revelation to witness such power emerge from an unobtrusive, complaining country man.' Sadly we will never hear Roscoe singing again.  But we do have these wonderful recordings (together with some stunning photographs) and I can only take my hat off to all the people who went out of their way to help preserve this outstanding music.  An Untamed Sense of Control has to be my album of the year.