Before I get into this review, I must firstly make a number of points:

Right.  So there is a drawback is there?  Well maybe, but I'm not entirely sure.  I have a terrible feeling that it is in the eye of the reviewer, in as much as this CD is not what I hoped it would be, and that is no fault of Hooker, Gene Deitch, Paul Vernon or the admirable Flyright label. 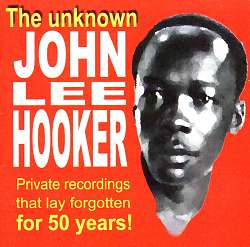 And that is therefore unfair.  But, as I am writing this review, let me explain.

Going back to the Muddy Waters recordings I mentioned.  Here was a man in his prime, in full command of his native rural Delta blues style - learned directly from Son House and fashioned from recordings by Robert Johnson - just a few years before developing and transforming it into a potent urban sound that through pure serendipity would influence the course of Western music forever.  An intriguing snapshot from within a nice well ordered progression.  But what of Hooker?  A man born within two years of Muddy, who grew up in the same town - Clarksdale, Mississippi - and whose influence as I say can still be heard to this day.  His formative years are shrouded in much greater mystery.  Aside from learning the rudiments of the guitar from his stepfather William Moore (an otherwise biographical blank) and 'developing his own style', we know very little.  And therein lies my one disappointment with this collection, because at the end of it I feel none the wiser.

What this might of couse tell us is that Hooker's achievement is far greater than that of Muddy Waters.  Muddy took his inspiration from two of the most awesome talents to emerge in the Deep South of seventy years ago, whereas Hooker developed his own unique and individual style having picked up a few tips from a Delta nobody.  Either way, what is obvious from these recordings is that his unmistakable style was firmly established by the time these recordings were made in 1949 Detroit.

Sure, there are songs from the deep well of 'black folksong' such as John Henry and a very fine Jack of Diamonds but so ingrained are they with Hooker's unmistakable familiar eccentricity that I can only hear them as 'John Lee Hooker interprets Folk Songs'

and not 'these are the folksongs that were fundamental to the development of my own style' - and nowhere is this more evident than on his brooding and introvert version of the old worksong Water Boy (sound clip).  That is not to say that they are not fine performances - far from it - and indeed Rabbit on a Log has all the driving percussiveness required for an old country dance tune and is a superb performance.  But again, it is Hooker performing a country dance tune and not performing for a country dance.

Difficult to judge are the three spirituals which possess all the relentless dynamics that such material requires, but Hooker's gentle voice does not suit this material well.

Much better are his readings of Delta staples such as Six Little Puppies and a superb Catfish Blues (sound clip).  With its familiar hypnotic rhythm and characteristic bass snaps this track is exactly what I wanted to hear.  Blistering stuff.  And blistering too are three of the four songs from the second session where Hooker sounds far more relaxed and confident and performing what I would guess to be in a style much closer to his then club style.

Whilst the maudlin Cecil Gant ballad I Wonder has never appealed to me, the final untitled blues has genuine intensity and slashing guitar, while She's Real Gone (sound clip) and 33 Blues (the latter enlivened by some real audience presence) are raunchy, stomping classic Hooker.  And in any league classic Hooker would be ranked very highly indeed.

This truly is an outstanding and genuinely historic issue.  Any negativeness implied in this review is something for me to resolve.  It should not (and I greatly doubt that it would anyway) dicourage anyone from placing it on their list of 'my next purchase'.