Sings Songs For The Masses

Own label - no number

Threw Down, She Had Eyes, Pretty Polly, Ol’ Virginee, You Gonna Need Somebody on Your Bond, Dom Ospritch, Soldier’s Joy, Banjo Medley (Bonaparte’s Retreat, Salmon Tails up the River, Ducks on the Millpond, Milo Mou Kokkino), Jesus Gonna Make Up My Dyin’ Bed, Crawdad Hole, Souris Mécanique, Will You Go Lassie, Redwing, I Did Bide. 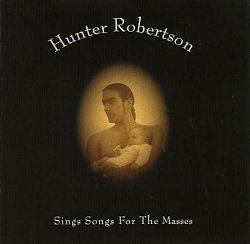 The ubiquitous availability of CD creating and burning soft- and hardware has made the 'vanity publication' a commonplace these days.  Whilst there is often due cause to lament this (piles of such nonsense in my office), it does mean that you get to hear some stuff that would probably never see a commercial publication - this is completely unsurprising in most cases - but occasionally something strange and worthwhile does turn up.

So - this is the second CD I've received this month for which the words 'strange and worthwhile' seem appropriate (the other was the Cath and Phil Tyler one).  Hunter Robertson was born in California, son of a Scottish 5-string banjo player and having taken up the banjo himself, has lived in Greece, France and the UK, and is now resident in Vermont.  He wrote to thank me for Musical Traditions - through which he came to hear Sardinian polyphonic singing, which he describes (correctly) as 'gorgeous'.  So - what about his own music?

It's mostly traditional American music (sound clip left - Soldier's Joy), plus some of his own compositions in very much the same vein (sound clip right - Souris Mécanique).

He plays banjos and 12-string guitar, plus one track each on electric guitar (sound clip left - I Did Bide), Opus (a sort of gourd banjo), and a very creditable one-man-band.  All of the playing is pretty quirky - and extremely interesting.  He also sings on seven of the tracks - and I rather wish he hadn't.

His voice has the deep, rough, rumbling tone of a cross between Captain Beefheart and Tom Waits - and, as the posessor of a deep voice myself, I know just how hard it is to make it emotionally expressive.  Hunter Robertson has clearly done a lot of work on his instrumental music, resulting in a load of fascinating tracks.  Unfortunately, it seems to me, he has done almost no work on his singing - beyond learning the words.  The results, on too many of the tracks, are flat, uninteresting - and ultimately pointless, if you consider that the point of singing is communication.

But it's a nice CD over all, and I particularly like his take on Redwing - played on fretless gut-stringed banjo - and well sung.