The notes to this disc look ahead to "Volume 20, the last in our series".  Every one of them so far has brought revelations of the variety and richness of the music of Indonesia, yet project director Philip Yampolsky is not displaying false modesty when he characterises the discs and their annotation as often "exploratory and introductory ... initial forays into uncharted territory". 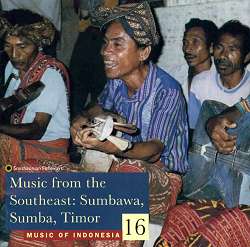 Even acknowledging that Indonesia is the world's fourth most populous country, with 300 ethnic groups inhabiting 3,000 islands, the diversity of musics to be found is still astonishing.

That said, some of the material included in this volume will sound familiar in broad detail, whatever aspects may be unique to the particular locations.  The opening two examples of biola rawa Mbojo (violin and singing of Mbojo, both a territory and an ethnic group in Sumbawa) feature the long, sinuous melody lines often found in Islamic music.  Husen Jambe is a terrific violinist and singer, and his daughter's singing, especially on the highly chromatic Lopi Penge, is equally impressive, but the content of these tracks is not as purely startling as some of the other material.  Take, for instance, the two stringed jungga of Sumba, a lute played with a drone and an intonation that Yampolsky compares to that of a bottleneck guitar; this is going a bit far,

although similar finger slides may be heard in the playing of blues ukelele players like Rabbit Muse and Lemon Nash, but 'bluesy' is certainly the adjective that comes to mind when listening to this sound clip. (sound clip)  It's a big world, and there's no need to look beyond polygenesis for explanations; this coincidence of sounds, though intriguing, is less remarkable than the altogether uncanny resemblance between the vocal polyphonies of East Flores, as heard on Volume 8 in this series, and those of the southern Slavic nations.

The gong ensemble is probably the musical sound most often thought of as typically Indonesian, being found everywhere except New Guinea.  Yampolsky has argued in the notes to Volume 14 (and in a revised version at www.si.edu/folkways/Indonesia/indonesia.htm) that Indonesian gong ensembles can be divided into gamelan, meaning the well known and elaborate Javanese and Balinese orchestras, and everything else(!), with 'everything else' subdivided into 'melodic' and 'non-melodic' according to whether the music is structured by the foregrounding of a melody or the interplay of rhythmic patterns.  The gong ensembles of Sumba and East Timor are non-melodic; those in Timor play for dances, but in Sumba the recording team were fortunate to meet two groups who were willing to play funeral music when there was no funeral taking place.  (Even so, one group would only play in the Catholic mission compound, outside the village, not wanting either to bring misfortune, or falsely to signal that a death had taken place; the other ensemble played in their village,

but followed the funeral music with a loud dance tune, to make clear that it was just a demonstration!)  This clip (sound clip) is from the latter recording session, and works within a scale (C D E F# G A B) confined to a major seventh, and including a semitone and a tritone.  Yampolsky hints at the many avenues of research that remain to be explored, noting that the other gong ensemble's scale (C D E G A B E) is a major tenth without semitones: "although without research we would not dare to assess the nature of the musical experience generated by these tunings for Ankalangese, we may assume ... that the experiences are at least different.  This sort of difference must inevitably be associated with place and community."

If there are unanswered questions adhering to the well known gong music, still more so is this true of the vocal music of East Timor, sung for circle dances on festive occasions.  Liliba accompanies tebe lilin, a slow circling dance without rhythmic accent, and is the central song of the repertoire.  Its loose monophony is well described by Yampolsky as "melodically and rhythmically elusive", although it is by no means as rhythmically exotic to outside ears as Berelesu,

with its slow cycle of 19 beats (5+5+5+4), each subdivided in three.  This clip is from the women's chorus of Liliba, (sound clip), and illustrates both the sound of the music, and the problems of fieldwork constrained by a timetable: "the singers were - or claimed to be - unable to explain the lyrics.  When we asked why the men howl during the women's chorus in Liliba, a singer answered, "there may be someone who knows."  (We found later that Vroklage had described the lilin songs as having a 'very immoral impact'; had we known that in the field, we would have sought exegesis more assiduously.)"

The most remarkable music on this CD, though, is surely the string band music of the Meto and Tetun peoples of Timor, played on home made guitars and fiddles, usually with singers, and sometimes a flute or ocarina.  This music accompanies a recreational dance called bidu, which is very popular, although seemingly outmoded among the trendy young.  Being non-ceremonial and not always choreographed, bidu has a fairly low status despite its popularity, and attracts no tourist or media attention.  It has also been ignored by research hitherto, being unmentioned in Jaap Kunst's pioneering studies from the forties.  Vroklage, writing in 1952, does not describe the dance, and states only that the instruments were introduced by missionaries, although as Yampolsky points out, there was a Portuguese presence in Timor for 400 years, and "the resemblance of bijol, one of the Timorese names for the guitar in this ensemble, to ... violão ... and vihuela is intriguing."

Whatever the historical ins and outs, the sound of bidu is a compelling one.  "The melodic idiom is basically tonal, but any sense of harmonic progression or contrast in the melody is tightly constrained by the accompaniment, which is locked in the tonic chord [and] largely a decorated drone, with the upper strings of the guitars damped so tightly they produce only a scraping sound".  This would, I suspect, become very wearing to outsiders when played as a series of instrumentals; of five pieces recorded in Oelolok (by a violinist and two guitarists), only Heo Banamas, featured on this CD, included a vocal - but what a vocal!  It "seems to seize tones from outside [the tonic] triad, savor them - revel in them - and then resolve them back into the tonic chord".  Within a scale of two full octaves, the singer leaps through "minor sevenths, octaves, major ninths, a rising major sixth that keeps going to the minor sixth beyond".  Yampolsky ruefully notes that "to our great chagrin, we failed to find out why this is the only sung piece, or what the text ... is about.

To make the best of our oversight, think of this as a purely musical experience; you have this wonderful piece, and no mere information to distract you from it".  Yes indeed! (sound clip).

I'd like to put all 12:36 minutes onto a sound clip, but this extract will have to do.  To finish with, and to prove that bidu is one of the great vocal musics of the world, here's an excerpt from We Oe, with a similar lineup, except that both guitarists sing.  (sound clip)

Awaiting successive volumes of this series has been one of the musical treats of recent years, and if it's soon to end, I hope, without knowing how it's to be done, that the final discs will equal or surpass this one.

An overview of Volumes 8 to 15 of this series, by René van Peer, is also available in these pages.
Site designed and maintained by Musical Traditions Web Services   Updated: 10.11.02