Out the Fire; Ten Thousand to Bar Me One; Cousin Family; When You Hear I Die; New York Subway; Me One Alone; Sly Mongoose; Happy Land of Canaan (#2); Mary Ann; Yankee Dollar; Pepsi-Cola; Tied-Tongue Baby; God Made Us All; The Soldiers Come and Broke Up My Life (#2); Labor Day; Brown Girl in the Ring; Chicago, Chicago (#2); My Intention Is War; No Place Like the West Indies; My Experience on the Reeperbahn (2nd version); Auf Wiedersehen; Cat o’Nine Tails; Crisis in Arkansas; Steel Band War; You’re Wasting Your Time (#2); I’m Going Back to Africa 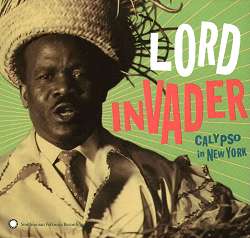 Rupert Grant, from San Fernando in Trinidad, was given his nom-de-calypso by his tailor - "I tell you, Rupert, you should call yourself Lord Invader so when you go up to the city you be invadin’ the capital."  In February 1937, Invader made his first recordings, having successfully penetrated the highly competitive calypso scene in Port-of-Spain at the age of 22.  In 1941, he was one five calypsonians who travelled to New York to record for Decca, and promote Trinidadian music, but his next invasion of the Big Apple came in less happy circumstances; as is well known, Morey Amsterdam plagiarised Invader’s Rum and Coca-Cola, which became a massive hit for the Andrews Sisters, and early in 1945, Rupert Grant headed north to pursue legal remedies.  The case kept him in New York for several years (and other singers followed him, either to appear as witnesses, or to take advantage of performing opportunities, or both.) There was already a lively calypso scene in New York, with musicians like Gerald Clark and Gregory Felix backing the likes of Macbeth the Great and the Duke of Iron (all of whom appear, along with Invader, on Calypso at Midnight! [Rounder 1840] and Calypso after Midnight! [Rounder 1841], reviewed elsewhere on this site.)  Among his other activities during this sojourn in the States, Invader recorded for Moses Asch’s Disc label.  Ultimately successful in his lawsuit, although he didn’t see the money for another seven years, Invader returned to Trinidad until 1945, when he went to Britain, in the footsteps of Lord Beginner, Lord Kitchener, and other calypsonians.  He made some appearances in Europe (which inspired My Experience on the Reeperbahn and Auf Wiedersehen) before returning to New York late in 1958, and recording again for Asch.  He died in Queens in 1961.

The 26 tracks on this CD, half of them previously unissued, have been selected from Invader’s association with Asch by John Cowley, who also supplies the excellent annotation.  There’s no version of Rum and Coca-Cola included, perhaps because, with the case still unresolved, Invader saw no reason to increase Morey Amsterdam’s publishing income, but there is a lively version of its sequel, Yankee Dollar, and a surprising spin-off from the whole business, in the shape of Pepsi-Cola Through the system Pepsi stimulates, It rejuvenates and recuperates, And whenever you drinking your liquor, Just let your chaser be Pepsi-Cola.  It appears that Pepsi were perturbed by the free advertising Coke were getting from Invader’s hit, and urged Tin Pan Alley composers to write, and Decca’s Jack Kapp to record, songs boosting their product.  They evidently didn’t have much success; even this tribute to the world’s number two bloat-inducer remained unissued 'til now.

Topicality, though not invariably present, is one of the principal characteristics of calypso lyrics, and there’s no shortage here of songs addressing issues of the day.  Crisis in Arkansas (about the integration of schools in Little Rock) and God Made Us All remain stirring protests against racism, although the accompaniment on the latter song, by Pete Seeger’s dutiful banjo and a quacking clarinet, is curious rather than compelling.  On a more local and ephemeral plane are Labor Day, a 1948 adaptation of Jump in the Line, celebrating New York’s first Trinidad-style carnival parade, which had taken place in Harlem the previous September, and Cat o’Nine Tails, in which a response to the behaviour of British Teddy Boys is proposed.  This March 1959 version is an update of Invader’s 1945 recording, Old Time Cat o’Nine, which John Cowley describes as ‘ironic.’ Maybe so (and I haven’t heard the original), but I spent 18 months in the education system of British Guiana, which is both geographically and culturally close to Trinidad, beginning about six weeks before Cat o’Nine Tails was recorded.  Remembering the centrality of ‘licks’ (corporal punishment) to discipline in those days, I strongly doubt that there’s any irony involved.

One’s impulse, in reviewing this record, is to select sound clips for their verbal cleverness, but there are just too many examples of that to choose from.  Since another of the CD’s great pleasures is the variety and quality of the accompaniments, I have tried to emphasise that aspect when selecting audio samples.

As far as word play goes, this extract from Labor Day will have to stand for the rest, at the same time as showing off Daphne Weeks’ delightful, Spanish-tinged piano accompaniment, which is somehow formal and unbuttoned at the same time (sound clip).  The Soldiers Came and Broke up My Life

is another routinely ingenious lyric (and another complaint about the wartime presence of the Yankees in Trinidad), but just listen to the fiddler’s switch from pizzicato to hot, jazz-inflected playing on this extract, and to the energy and commitment of Invader’s singing (sound clip).  Some calypsonians seem to feel that verbal dexterity is enough, and give their songs a rather distanced, nuanceless delivery, but that’s never a problem with this artist.  E

ven a song as well known as Mary Ann gets a rumbustious treatment from Invader, brilliantly accompanied by (Gregory) Felix and His Internationals.  Mary Ann was the principal song of the V-E and V-J Day celebrations in 1945, and this rendition, though doubtless extensively cleaned up, gives an inkling of the energy of the road march bands, making bacchanal like fire. (sound clip)

As well as recording Invader’s thoughts on the passing parade of human folly, Asch seems to have been keen, probably with the encouragement of Alan Lomax, to document the historical and contextual aspects of calypso.  This probably accounts for the presence of the well known Sly Mongoose, and of the Spiritual Baptist song Happy Land of Canaan.

It also explains the presence of several items where the accompaniment is supplied only by percussion.  These titles are all performed with more of that impressive energy - very appropriately in the case of Ten Thousand to Bar Me One,

which is an old stick-fighting kalenda, accompanied by ‘drum, bottle and spoon’ (sound clip).  And, for those who only know Boney M’s version, here’s a little of Brown Girl in the Ring the way it should be done (sound clip).  The notes observe that Asch ‘encouraged many of those who recorded for him to perform … repertoire suitable for children.’  I guess the song is probably suitable for children in the absence of the dancing, which is usually explicitly and hilariously erotic.  (Testimony of my mother, who won’t go into the details of the ‘motion’ shown by members of the Mission Chapel, New Amsterdam Boys’ Brigade.)

This CD is a well selected and well presented account of a great calypsonian in top form, and anyone with the least interest in calypso should jump in the line at the record shop.