No label, no number 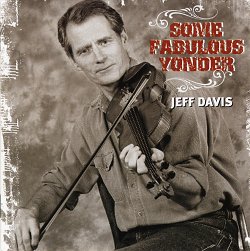 This is a great CD.  I'm sorry to have only very rarely seen Jeff Davis live, so this begins to make up for this lack.  And the record starts in a splendid way, with the best performance of River Driving I've ever heard.  This is a terrific song, and I can't imagine it being sung much better than this (sound clip).

Track 2 is an instrumental, Indian Whoop, which comes from the manuscripts of Willian Sidney Mount, the painter.  Although he left some source notes, this tune wasn't mentioned - so it's not known where it came from.

It certainly doesn't sound, to me, as if it derives from Native American music (sound clip).  Jeff plays fiddle, ably assited by Howie Bursen on banjo; The booklet seems to indicate that Brian Peters plays melodeon on it too - but I can't hear it.

Track 3, Doney Gal, came to Jeff, when he was only 18, from Alan Lomax, who he heard sing it one afternoon at the home of Frank and Jean Warner.  It's a cowboy song and, referring to the current wisdom at that time, Jeff describes it as 'the best tawdry, cheap and unworthy song I've ever heard' (sound clip).  This would be a good point to mention the quality of the writing in the booklet: depite being only 24 pages in length, it manages to fit in seven atmospheric photos and a vast amount of information about the songs and their singers.  The writing is clear, personal and often amusing - at the end of reading it, I really want to meet the man ... apart from the superb singing and playing, he seems such a nice and interesting human being.

A quite extraordinary aspect of the CD is sheer breadth of types of song to be found here.  The 4th track is Beulah Land, played as a sort of reconstruction of what a slave-era African American band might have sounded like.  Track 5 is Adieu My Lovely Nancy, in a vesion Julie Hennegan sings from Arkansas - much different from the Coppers' well-known version.  Libby Prison is a Civil War song, as is the splendid Cumberland and the Merrimac; The Bold Privateer is an English song Sharp collected from Mary Gross, in the Peaks of Otter, Virginia.

Felix the Soldier seems to be an original American version of the story behing the Irish Mrs McGrath.  Cowboy's Life is just what it says, and is wonderfully sung here in much the same style as it was recorded by Sloan Matthews, of Alpine, Texas.  I was hoping that the next track, Old Paint, would be the wonderful version from Jesse Morris; it isn't - but it's none the worse for that, and is, at least comprehensible!  It contains the lovely line 'Old Bill Jones had two daughters and a song', so it's not entirely unexpected when the following track should be Frank Proffitt's Wild Bill Jones.

Mount's Untitled Jig/Setauket are two more selections from the Mount manuscripts, the latter may well have been composed by 'Black Tony' Clapp, a slave owned by Mount's mother's family, and 'resident fiddler' for the Long Island village of Setauket.  We end with Shortening Bread which, despite being known by almost everyone in the US, black or white, is of completely unknown origin.

This is a wonderful record, and its booklet should be an inspiration to us all.  You can buy it from: www.harbourtownrecords.com/JeffdavisCD.htm