In Irish traditional music circles, and particularly in piping circles, the names of Johnny and Felix Doran evoke a by-gone age of the travelling piper who entertained crowds at fairs and race meetings in an Ireland that no longer exists.  The sense of mystery about these men and their ways is made stronger by the scarcity of recordings and even photographs of them in their prime.  Instead we must rely on legend and anecdote.  Many of the stories came from fellow musicians who have now passed on, such as Willie Clancy, Martin Rochford, Sean Reid and John Kelly.  It's over 50 years since Johnny Doran died and 30 since his younger brother Felix died, but their tradition is carried on through Paddy Keenan, John Rooney, and many others.  Felix was recorded here and there by Ciaran MacMathuna for RTÉ and by Peter Kennedy and Sean Davies, many of these are available commercially. 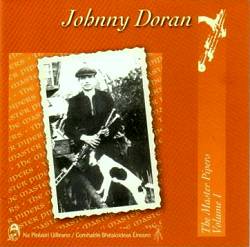 There are also a few private recordings of Felix circulating among the piping fraternity, but Johnny has always remained an enigma.  The nine items on this CD are the only known recordings of the man, made less than a year before a tragic accident put an end to his remarkable talent.

These tracks are as important an historic record as any other item in the Irish Folklore Commission collection in University College Dublin.  John Kelly, the fiddler and concertina player originally from Clare, kept a famous shop in Capel Street, Dublin which was a popular calling off point for many visiting musicians.  John knew Doran well and in 1947 contacted Kevin Danaher of the Folklore Commission when he thought Johnny was showing signs of declining health, recommending that some recordings were made of the piper.  In the Commission's offices in Dublin University, Danaher set up what was for the time the state of the art technology using 12" 78 rpm acetate recording discs and recorded eight five minute solos, and one duet from pipes and fiddle.  Johnny Doran may possibly have broadcast once on 2RN in the 1930s but basically this is the first time he was ever exposed to the artificial situation of studio playing in front of microphones and the attendant technology.  Even today, studio conditions affect players and many a musician is much more at ease, and more creative, in a session or social setting.  This makes what can be heard here all the more remarkable and makes you wonder what Johnny Doran must have sounded like in less restraining circumstances.

These tracks have been digitally remastered from the original acetates and are a great improvement on the cassette issued in the 1980s by the Folklore Commission.  The speed of the playing is slower to bring the pipes down to concert pitch which allows the variety in the piping to be enjoyed even more.  This recording is much brighter over all and gives a truer impression of the set up of Doran's Rowsome pipes.

In January 1948 a wall fell on Johnny, breaking his back.  He never fully recovered and eventually died in St Vincent's Hospital in Athy on January 19th 1950, aged only 42.  The whole traditional Irish community owes a great debt to both Kelly and Danaher for preserving this glimpse of a man that many regard as the greatest ever piper and certainly one the true greats of Irish traditional music, in the same league as Touhey, Coleman and Morrison.

His command of the instrument and all its available techniques on chanter and regulators was absolutely complete.  A remarkably creative mind, applying variation in rhythm, ornamentation and melody at every repeat of a tune, marks him out as a true genius.  In the very extensive sleeve notes Brendan Breathnach is quoted as saying that Johnny seemed to play in response to some inner urge or feeling, going over a tune until he has worked the whole thing out of his system.  Certainly there is a wealth of heartfelt emotion and exuberance in his playing.

The music itself is simply breathtaking.  While Paddy Keenan recorded many of these tunes and settings on his first LP, there is no substitute for hearing Johnny himself.  The CD is presented in the order the tunes were originally played and one can hear Johnny getting used to the situation and becoming more confident as the pipes warm.  The first set of tunes are the only jigs on the recording, and to quote Pat Mitchell's authoritative essay on the tunes, Doran gives a masterly lesson on variation which, no matter how wide ranging, remains within the boundaries of Irish musical tradition.  On the same acetate, Doran adds the reel The Steampacket which so famously opened the first Keenan LP.  These tunes put to rest any impression that "street piping" was essentially open as opposed to tight piping.  There are plenty of tight and semi-tight triplets, rare tipping of the same note, alongside the torrents of open triplets and multiple rolls, but all the notes are cleanly articulated.  Perhaps the style is clearer from Felix's slightly slower playing than that of his brother - but the style is undeniably from a common traditional source.

More reels follow, including the first of two renderings of Rakish Paddy.  Kelly then joins the piper for two more reels, both tunes filled with wild variations on the chanter and the regulators.  Johnny also stops the drones for a couple of parts just to add to the variety.

After playing two slow airs, An Chuileann and Sliabh na mBan, Doran sounds to have settled down to the recording environment and lashes into Colonel Fraser, My Love's in America and Rakish Paddy.  These are benchmarks that have never been equalled.  The first reel is one of the great piper's test pieces and this is a setting that has enough tricks to test any piper.  The second reel is more common but again Johnny reinvents the tune with a setting to rival that of Tommy Potts, but perhaps truer to the tradition than Potts'.  The second playing of Rakish Paddy shows us just how inventive Doran was.  There are hardly any variations in this version that had been played earlier in the recording session.  Using the old two part version of the tune, Johnny weaves a mesmerising pattern around the simple bones of the melody.  Willie Clancy was recorded in the late 50s playing another series of variations on this tune, obviously got from Doran, which suggests that if Doran had recorded it a third time he would have introduced yet more variety.

The last three tracks focus on slower dance tunes, a set of hornpipes and two standard set dances, The Job of Journeywork and The Blackbird.  The hornpipes are probably the most damaged acetate and the first tune is faded in for the last time through.  The way Doran works new life into The Harvest Home shows that even the simplest tune can come to life in the hands of a master.  The set dances are once again filled with wonderful variations.

The accompanying booklet includes the sketch of Johnny's life written by Jackie Small for the original cassette issue, but Pat Mitchell's essay on Doran's approach to playing is a great help to appreciating the finer points of the piper's creativity.  At times it gets a bit technical but Pat's enthusiasm and admiration excuse the depth of his analysis.  The CD is illustrated with a couple of newly published photos of Johnny and a lovely little old faded snap of John Doran senior, who also appears to have played in a standing position, with his foot propped up on his pipes case.  Sadly missing from the booklet is the photo of Johnny, taken probably at Galway races in the 1940s, which featured on the cassette.

Despite the amount of surface noise on these recording, it is easy to focus on the playing and this record should not be viewed as of academic interest only.  This is piping of the very highest standard and while it is obviously essential study for anybody interested in the artistry of the uilleann pipes, it can be enjoyed by the casual listener to Irish music simply because of the excellent playing and the way it lifts the spirits.  It is available from the NPU website at   www.pipers.ie