As the CD title proclaims, Joseph Falcon was indeed one of the pioneers of Cajun music, taking that unique cultural form into a recording studio for the first time ever as early as 1928. 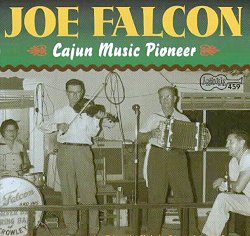 Over the next nine years a total of forty five titles featuring Falcon's accordion lead were issued on 78 rpm discs, most often in the company of his first wife Cleoma Breaux, who provided vocals and guitar accompaniment.  Editor Chris Strachwitz tells of Falcon declining to record for him in 1962.  He had had his fill of the music being reduced to a stereotype, and of not being offered money to commit to wax.  These recordings, then, come from the tape machine of Valerie Post, who with her husband Lauren (who also provides the sleeve notes), was on more intimate terms with the great man.

About half of the music heard on this CD appeared originally on the early Arhoolie vinyl album LP 5005.  One real advantage of the increased running tine of the modern format is the potential inclusion of additional material (of course, not every record company takes advantage of it).  This is particularly pleasing where those extra tracks emanate from the same session, in this instance an in situ live Cajun fais-do-do.  Strachwitz notes how the earlier imbalance of the vinyl version - consisting largely of two steps and other up-tempo numbers - has been redressed here, with the inclusion of many waltzes which are a ubiquitous aspect of live performance.

I would like to have been told whether the sequence on the CD was the same as that played at the dance, and, if not, then for the sake of authenticity wish it had been.  The CD begins and ends with a pair of real stompers, and white there's every reason to suppose that, over the course of four decades of playing for dances, Falcon knew exactly how to work his audience, the closing comment of the first track - "That's all folks" - suggests serious rearrangement by Strachwitz.  In fact, we know from an interview with Falcon conducted in 1965 by Lauren Post, published in the phenomenal first volume of Ann Allen Savoy's Cajun Music - A Reflection of a People (Bluebird Press, 3rd edition, 1988), that this particular fais-do-do began at eight in the evening with St Landry Waltz.  During the course of the following five hours or so thirty two dances were recorded, so that we may perhaps anticipate a second volume of this fine music.

But this is a minor quibble that probably won't even occur (or matter) to most listeners.  In the final analysis the music is all.  And on that note, Lionel Leleux's fiddle style is pleasingly clean and, while not often setting the band alight, is perfectly functional within the context.  It is to Falcon's credit that he is not a mic hog, readily (and frequently) dropping out to give Leleux a chance to shine.  Leleux is a respected player who has also been a member of bands led by the great accordion player Lawrence Walker (who was no slouch on the fiddle either), and by singer D L Menard.  Allen Richard's guitar is distorted by the single recording microphone set-up throughout, though not generally too distracting.  Often, as in Corrine, Corrina, he is obviously struggling to find and hit the right chords.

Falcon's second wife, Theresa, thrashes away at her drum kit as if there may be no tomorrow.  It fairly propels everything along at a rate, although her technique of hitting the cymbal on the off beat for two or more bars is rather jarring until you get used to it (sound clip).

But, not surprisingly, it is Joseph Falcon himself who is the undisputed star.  His accordion playing is almost as good as it had been when first sitting in front of a microphone thirty-five years earlier.

Whenever he drops out the music barrels along just fine, but every time he reappears the lift is just tremendous (sound clip).  His vocals, featured on the majority of tracks, are, by and large, pretty good for a sixty-three year old.  Only on Hip et Taiaut are they pitched so low as to sound a bit painful.

The notes readily admit that the mix of voice and instrument, is imbalanced, to which one might add that the sound is a bit murky.  In general there is too much of the drums, not enough of the fiddle.  But the raw energy of the band and the positive reactions of the audience/dancers fairly leaps from the speakers.

Everyone gets a chance to shine during Allons a Lafayette, which is by far the best track (Les Flambes d'Enfer, with Falcon's fine bluesy vocals, ranks a close second), and it is certainly Lionel Leleux's finest hour here.  (sound clip). 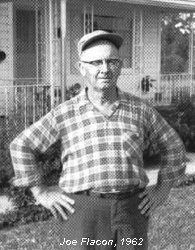 Many of Falcon's best known numbers, including Osson Two Step, Jole Blonde, Corrine, Corrina, Allons a Lafayette and Allons Danser Colinda, are reprised here in extended versions.  In fact, every one of the fifteen tracks last longer than any of his 78 rpm sides, some by more than two minutes.  More than one commentator over the years has highlighted the artificiality of the three minute 78 rpm medium, especially where functional dance music is concerned.  A band leader - at least one not working from fixed arrangements - must always keep a weather eye on the dance floor, and constantly reassess his audience.  On the evidence presented here, one would state that, for Joseph Falcon at least, the optimum length for both dancing and personal aesthetic creativity was between four and a half and five and a half minutes.

At double the running time and at least twice the enjoyment factor, even if you own the vinyl version you won't feel short-changed by this release.  And even without being aware that Falcon ceased public performance a mere few mouths later these would be incalculably important recordings.  That they were his last evokes poignancy; that they were so damned good evokes only happiness and great joy.