Go home and have your dinner 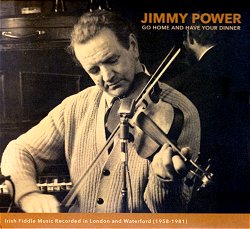 The Favourite, a bar in Holloway was something of a mecca for Irish music in the mid-1960s into the '70s.  The Sunday lunchtime session was hosted by Waterford fiddler Jimmy Power and Englishman Reg Hall on piano.  In those days pubs closed early at lunchtime and this CD takes its title from Jimmy's closing remarks at the end of the session.  Sessions in the pub were recorded and published on the Paddy in the Smoke LP but this CD draws from a wider range of recordings over the period roughly 1958 to 1981.  Jimmy died in 1985.

London born fiddle player Lamond Gillespie listened through tapes of over 50 hours of recordings from eight different sources, including tapes made by Jimmy himself, to produce this selection for the CD.  The result is 35 tracks of solo and group playing, mostly recorded around London but also some from trips home in 1965 and 1981.  The tracks are well organised to give a variety of solo, duet and group playing over the hour or so of music.  Each track has a date and source as well as the musicians involved.  Many of the tracks feature a single tune and as a consequence are relatively short.

Jimmy Power arrived in London in 1947 and soon met Michael Gorman, the fiddle player from Sligo who could be seen as one of the founding fathers of Irish music in London.  We get a few tracks from the two fiddlers accompanied on banjo by Maggie Barry from the late 50s.  Jimmy's childhood friend, uilleann piper Tommy Kearney, also features and there were some duets with Jimmy on the Kearney CD released a few years ago by NPU, the Irish pipers' association.  Power was a member of the Four Courts Ceili Band and we have tracks from rehearsals and a TV audition from 1962 featuring the band.

Jimmy Power had a very wide repertoire including some rare tunes from home such as Statia Donnelly's and Mag Long's.  He has a nice version of the well known jig Tatter Jack Walsh that takes subtly different routes round the basic shape of the tune.  He obviously had his favourite tunes as some appear more than once.  Of special interest are the three versions of the Bunch of Keys. A tune not heard very often in sessions these days, it was recorded by piper Johnny Doran in a two part setting.  Jimmy plays the third part that is in the O'Neill version and on track 31 we are treated to a very unusual fourth part that I hadn't heard before.

The musicians playing in London at the time came from all four provinces of Ireland and Jimmy picked up tunes from Clare, Galway, Kerry and Donegal as well as the Sligo repertoire of Michael Gorman and the popular 78s of Coleman and Morrison that flavour every Irish musician's music.  Galway features strongly through Lucy Farr, the Ballinakill fiddler who played in the Four Courts with Jimmy.  She would have been the source for the Crying Jig, more often known as the Rookery or simply Whelan's.  Castledaly box player Raymond Roland has been noted as the source of a tune called Roland's College Grove but which is actually Paddy Fahy's version of The New Road.

Jimmy Power had a strong rhythm in his music punctuated by triplets and rolls.  He mostly used double stopping to mark the end of a tune.  On the Galtee Reel we hear Jimmy using a variety of micro intervals to vary the C natural note that is a key feature of the tune.  Pipers such as Willie Clancy made use of the flexibility of the C note on the uilleann pipes chanter to great effect and in Jimmy's playing of this tune we get a similar effect where the C at the start of the second part is noticeably flatter than the same note in the first part.  On a couple of the tracks recorded in Waterford in 1981 we get an impression of the powerful tone that Jimmy got from the fiddle that isn't as clear on some of the earlier recordings.

Musicians, like Jimmy Power, who spent most of their musical lives playing sessions and in ceili bands were the backbone of the tradition outside Ireland and all too often are overlooked.  Reg Hall has championed many of the musicians around London and this CD takes its place alongside the recent sets of CDs tracing Irish music in London over the last 60 years or more.  The CD is well illustrated with contemporary photos and reminiscences and comments from fellow musicians including Danny Meehan and Reg Hall.  Jimmy made an LP for Topic back in the '70s but Lamond Gillespie has done a great job to present a well rounded picture of the music of a musician many of us only ever saw through smoke haze and over noisy punters in a crowded bar on a Sunday afternoon.