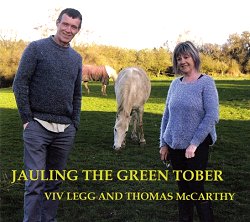 Well, this is a lovely thing - two of my favourite singers!  And although it was released just before Chrismas, Chris Brown (of Brown Label) has only just started sending out the review copies ... so no 'pre-release' review in this case.  Never mind - it's great to have it to listen to at last.

It does not - as some have supposed - contain any duets from Viv and Thomas.  A wise move, in my opinion ... Chris says in the Press Release: It would not have been true to the traditions of either Thomas or Viv to record any song as a duet.  And while the two singers, and their family traditions, have similar versions of the 'same' songs, the traditional stylistic elements make them entirely different.

And, on the subject of 'different' songs, we do get quite a few here which are different versions of songs you may know from the 'standard' English or Irish canons.  Viv's The Good-for-Nothing Man has only two Roud entries; one from her aunt Betsy Renals, and the other from May Bradley (MTCD349).  But I'm certain I've heard an Irish version of a very similar song.  Thomas sings The Widow's Only Son, and Viv sings The Prisoner Lad, which also turns up in the repertoire of Bill Smith from Shropshire (MTCD351) - all three are versions of Don't Send My Boy to Prison, written by Lewis Hall in 1895 in America, and which Will McQueen sang to Helen Creighton in Nova Scotia in 1954.  Thomas sings The Glens of Aherlow, from his mother, which is a completely different song to the one about the blinded ex-soldier.  At a slightly different level, you'll doubtless remember a song called Young Ramble Away (Roud 171) which was very popular in a version that Bert Lloyd prettied up in the '70s - but which fell right out of favour when Vic Legg (Viv's brother) started singing Catch Me If You can learned from his mum, Sophie Legg.  Basically the same story, but a much better song (in my opinion) - Viv sings it here.

Unless you happen to own a copy of Veteran VT153CD (Romany Roots) it's unlikely that you'll have heard much of Viv's singing before, and nothing from Thomas (I think) has appeared on either of his two previous CDs ... so there will be plenty here that'll be new to you.  Some favourites of mine are Viv's Down by the Old Riverside, got from her mother, and including the semi-tone jump between verses 1 and 2 which Sophie always sang.  Thomas's Mikey O'Leary Courted a Fairy came from his great grandfather, but nobody could remember the tune for it until his aunt came up with it quite recently.

You can buy this excellent CD from Thomas's website, price £10.00