Twenty years of the JEMF Quarterly
Edited by Nolan Porterfield

My, but this volume is a welcome addition to the happily expanding corpus of published tomes on the vernacular Anglo-American old-time music of the mainland United States. 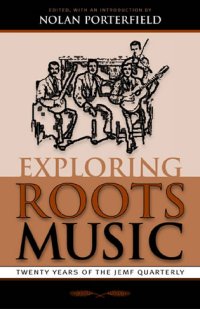 Drawn from the pages of the John Edwards Memorial Foundation Quarterly, a journal which spanned two decades and seventy seven issues between 1965 and 1990 (though the final issue was dated 1985!), this collection reprints a little over ten per cent of the roughly 240 articles originally appearing in that format.

Editor Nolan Porterfield traces the origins of the collection which eventually spawned that journal, in 1950s Australia, and chronicles the variable fortunes of its subsequent passage to and across the US.  Summarised briefly, one John Edwards evolved such an enthusiasm for the pre-war recorded old timey corpus (issued extensively in Australia, as in Britain, India, South Africa and other countries in the diaspora) that, in addition to amassing original discs and record catalogues, he undertook the groundwork of sorting out discographies and gathering together such limited details as were available on the performers.  Where these were non-existent he wrote copious letters to locations in the US which seemed likely to yield information, hitting the jackpot on a number of occasions.  Bequeathing his collection specifically to a home in the United States, following his death it arrived initially at UCLA, California.  From this relatively stable base a handful of enthusiasts, caught up in the excitement of rediscovering numerous long-retired old timey and blues performers, began issuing a sporadic newsletter.  From its humble beginnings as an organ which focused on the then-current state of the collection itself, it gradually evolved into a substantial quarterly journal which featured a slew of groundbreaking articles, features, and discographies, on the music, its performance context, and on the musicians and singers themselves.

Early on in this volume Porterfield observes that the Quarterly (inexplicably) never gained a widespread circulation or reputation.  In England its availability was practically nil.  During the 1980s and early '90s A & R Booksearch in Cornwall carried a selection of issues, but these were expensive at six or seven pounds apiece.  Compare these prices with those of Tony Russell's Old Time Music, which was effectively the English equivalent of the Quarterly.  At its launch during the summer of 1971 the initial issue of OTM flashed a cover price of a paltry 25 pence/75 cents.  Eighteen years later it had reached issue 45, and was still only Ł2.50/$4.00 (social and economic statisticians will relish the comparative strength of the dollar against the pound at the latter date).

So, while I have in my collection a complete run of OTM, I possess a mere three issues of the Quarterly, all kindly given to me by the great Finnish discographer Pekka Gronow, each one containing one of his groundbreaking pieces on ethnic music issued on 78rpm discs.  But the late Keith Summers, good friend and founder of Musical Traditions (a journal which, in its hardcopy, pre-WWW format similarly failed to gain anything like the distribution and recognition it deserved), was always flusher of pocket than I, and amassed a good-sized stack of them.  A decade ago, during a period in which I had access to a free photocopier, I borrowed Keith's stash and copied many of the major articles and discographies, ending up with four or five hundred photocopied sides.  So it is that many of the articles reprinted here are as comfortable as old friends, but a number of others were not so familiar.  Each of the twenty seven pieces, however, more than repaid a careful (re)reading.

It is common practise to draw attention to perceived faults and criticisms at the end of a review, but I so want to convey my enthusiasm for this volume that I intend getting them out of the way early on.  At that, there are really only two major niggles.  Marks deducted, then, for the awful design of the dustjacket.  Black, white and three shades of brown encompassing a digital scan of a line drawing (the original of which is reproduced on page 290) of the popular and extensively recorded band The Hill Billies, which looks like a child's tracing.  What were they thinking? And yet more marks off for that terrible, uninformative title.  'Roots' is a buzzword with unsavoury connotations in this quarter, and its use here is unlikely to fool any of the devotees of that pan-global syncretic pap into buying a copy.  It's almost as if both editor and publisher wanted this volume to remain as obscure as its source.

Being so familiar with both layout and typography of the originals, it seems a little strange to see these articles in a 'proper' typeface : much of the source run was typescript.  Disappointing, too, to have so few photographs, although Porterfield explains that so many years on they had no access to most of those originals which peppered the journal.  I miss them, of course, but they always were the icing on the textual cake, an added bonus, most welcome but by no means essential.

Of the photos which are included, one of instigator John Edwards is conspicuously absent.  Surely one must exist?  Well, maybe it doesn't.  But it beggars belief that there were none available in the collection itself of Riley Puckett (the original article featured nine), or Buell Kazee, or 'Knocky' Parker.  The piece on Woodhull's Old Tyme Masters features one photo, but the original had four, plus reproductions of advertising cards, a handout, and one of the original Victor record labels.  Also inexplicably omitted here is a useful contextual chronology of Woodhull family musicians within various aggregations across an eight decade span.

I could have wished also for a scan of one or more of the Quarterly covers.  That of Spring 1976, for example, features a nice line drawing of an aged female banjo player which would have conveyed a good impression of the original source.  An opportunity missed all round.  To criticise the content of the pieces contained herein, however, is to act in a churlish manner.  These are the essential and invaluable building blocks underpinning practically all of the substantial volumes which have appeared during the past two decades.  JEMFQ contributor Charles Wolfe, in particular, has subsequently become a prolific producer of major in-depth studies : of the Grand Ole Opry, of country music in both Kentucky and Tennessee, of the proponents of the southern fiddle style.  But other recent important studies (Jeff Todd Titon's Old-Time Kentucky Fiddle Tunes, and Will You Miss Me When I'm Gone? The Carter Family & Their Legacy in American Music, by Mark Zwonitzer with Charles Hirshberg, spring immediately to mind) have also benefited extensively.

As it happens, few if any of these pieces contain much to be overly critical about, and those readers already predisposed towards old time music in its various forms would do well to snap up this volume immediately.  For those with the hesitation blues, a summary of the contents might be useful.  Most of the heavy hitters in the field, including Norm Cohen, Charles Wolfe, Archie Green, Donald Lee Nelson, Gene Wiggins and editor Porterfield himself, are represented.  There is too much diversity (no criticism implied here) to comment extensively on individual essays, but the content of the twenty seven articles may be broadly summarised in this manner :

Included within the latter category is a fascinating study of the adoption of country music and its Western imagery among European immigrants in Michigan and Illinois.  Only one piece, that by Fabrizio Salmoni, transports the music to the non-English speaking diaspora, by examining its fortunes (or rather lack of them) in Italy during the post-war decades.

The majority of articles straddle and transcend my deliberately broad definitions, of course, as artists absorb both traditional and popular material into their repertoires, and find an audience via recordings, via radio, via sheet music and songbooks.  Almost inevitably, though, the most valuable historical material derives from first-hand accounts of participants.  Thus, George Biggar guides us through the evolving fortunes of the WLS National Barn Dance, broadcast out of Chicago, beginning in 1924.  This was one of, if not the first programme of its type, and one which spawned scores of imitators.  How ironic, then, that the first fiddle player to broadcast should be Tommy Dandurand, who from his recorded output - The Irish Washerwoman, McLeod's Reel, Larry O'Gaff, and Campbells Are Coming, for example - is clearly but a short step away from the old world, Irish and Scottish traditions.  Art Satherly's memories of seeking out performers to record and treating them as important talented artists rather than (as was too often the case with many of these disenfranchised men and women) production line fodder, is a pleasing eye-opener; as are his stories of the actual record pressing process, and of the commercial philosophies of the various labels he worked for.  And Tony Alderman's recollections (in the form of a letter to Archie Green, which runs for about two pages here) on how the music came to be widely known by what was essentially a pejorative term - he was at the naming ceremony - is an important historical document indeed.

In fact, the overall importance of the JEMFQ simply cannot be overstressed, and the more so as its editorial remit widened considerably as time hurtled onward.  Although no examples are included here, among the most important areas following expansion was the music of ethnic immigrant minorities in the US, which has produced a lasting effect.  Pekka Gronow presented a fascinating series of articles on just such recordings, plus an overview of the companies which produced them (the discographical equivalent of cracking a portion of the genetic code).  This, in turn, led to his major piece in the 1982 anthology Ethnic recordings in America.  A neglected heritage, and also fed significantly into the major seven volume discography compiled by Richard Spottswood, and published in 1990 as Ethnic music on records.

Of those which do appear in this compilation, Robert Coltman's piece on the roots of the country yodel fed into a number of subsequent books, including editor Porterfield's own biography of Jimmie Rodgers.  While Ed Kahn's piece on (quack) Doctor John R.  Brinkley's involvement in broadcasting along the Mexican border covers much of the same ground as Gene Fowler and Bill Crawford's Border Radio, published fourteen years later (and though absent from their bibliography it seems unlikely they were unaware of it).

And so the list goes on, but I must call a halt.  This is indeed a fine anthology packed with important, accessible and often very entertaining historical essays.  If sales warrant, perhaps a second volume might eventually see print.  Certainly the source journal contained material enough for an extended series.  Don't hesitate to contribute to the cause.