Just One More Song!  Book and CD
Local, Social & Political History in the repertoire of a Newfoundland-Irish Singer

Labrador Rose; The Badger Drive; The Anti-Confederation Song; The Bachelors Lament; Paul E Hall story; Pat Malone Forgot that He Was Dead; The Road to Dundee; John Park he had Nar’ One; There’s a Bridle Hanging on the Wall; Teaching McFadden to Waltz; Five Boss Highway; Employment Song; I am a Roving Peddler; Galway Shawl; Mary Kate White; Paddy Haggerty’s Old Leather Breeches; Come All Ye Jolly Hunters; The Cameron Men; On the Wings of a Dove; On the Wings of a Dove ; The Sealers’ Song; Winnie MacNeil; The Thomas Cat; Micky Jim MacNeil; Today; Wee Cooper o’ Fife. 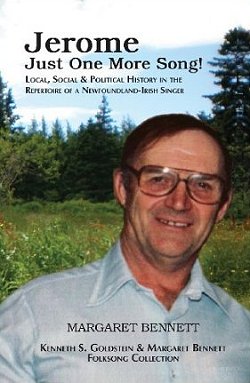 Jerome Downey was born in Western Newfoundland in 1923 and passed away in February 2014.  His family was of Irish descent, and he lived a self-sufficient life as hunter, woodsman and farmer among Scots, French, English and Mi'Kmaq neighbours in a thriving traditional culture with songs, poems and stories being integral to everyday life in the Codroy Valley community, sometimes described as the 'Garden of Newfoundland'.

These recordings were made in 1980 by folklorists Margaret Bennett and Kenneth S Goldstein (1927-1995) and constitute a fascinating CD collection of 26 of Jerome's songs, mainly of British and Irish origin, but complemented by topical songs about local events and characters who formed part of an isolated community where traditional culture had survived the assault of the 20th century better than most places.  There are substantial but very readable notes and complete lyrics to all the songs, in the form of a book of 165 pages, placing the local songs in their proper context, as well as researching the origins of all of them.  A few of these may be very familar, such as the Wee Cooper of Fife and the Galway Shawl, but their delivery is distinctly Jerome Downey and no-one else.  Like many singers recorded over the years in Britain and Ireland (e.g Jane Turriff) his repertoire included material not regarded as 'traditional' by some collectors, such as the old country hit There's a Bridle Hanging on the Wall.  The well-known English collector, Maud Karpeles collected in Newfoundland in 1929/30 (The Songs of Newfoundland, 1970) but as a Cecil Sharp acolyte, she was only interested in versions of old songs already known in England, and specifically rejected songs such as When You and I were Young, Maggie' as being of 'little aesthetic value'.

Fortunately for us, Margaret Bennett and the late Ken Goldstein were able to take a more objective view of the culture in its entirety, so included here is material Ms Karpeles would have scorned, such as some of Jerome's many comic songs, such as Teaching McFadden to Waltz and Pat Malone Forgot that he was Dead.  This latter song was first recorded by Dan W Quinn in New York in 1902, although it is doubtful if this was Jerome's source, his version bearing little resemblance to this 'original'.

Over 30,000 Irish had arrived in Newfoundland between 1800 and 1820, and the forced emigration of the Irish and Scots in the mid 19th century is well documented but the ill-fated codfish of Newfoundland's Grand Banks had been a magnet for many Europeans, especially English and French for many years (centuries?) before those tragic events.  However as the French influence waned over the years, the increasing strength in numbers of immigrants, the old songs of Scotland and Ireland were increasingly secure as an ongoing part of Newfoundland's culture.

One indication of the vibrancy of any tradition has to be the continuation of local songwriting, and in Newfoundland local trades produced their own songs such as the Sealers' Song and Come all ye Jolly Hunters, while local writer Paul E (Paulie) Hall contibuted one of Jerome's own favourites, a 23 verse comic effort The Bachelor's Lament.  Another local writer, Hughie O'Quinn gave him I am a Roving Pedlar.  Hughie was of French origin, originally Hugh Au Coin who had his name 'Hibernised' by the local Irish priest in an interesting parallel to the Anglo-Irish habit of anglicising Gaelic Irish surnames - O'Hehir to Hayes being one example of this doubtful practice in Ireland.  O'Quinn also composed The Anti-Confederation Song - the rationale for this being the fact that until 1949, Newfoundland was a self-governing British colony and did not join Canada until then, so Jerome and his generation regarded themselves as Newfoundlanders first and foremost rather than Canadians!

Oh shall we wed the great Confed
Or shall we court the Yankee?
Or shall we bide at Mama's side
And use the self-same hankie?  (the Anti-Confederation Song)

Margaret Bennett spent several years in Newfoundland and is to be congratulated on this amazingly vivid portrait of a man and his music, but particularly for putting it all in context.  Her own background of kitchen ceilidhs in her native Skye and later in Lewis has given her great insight into a society in many ways easing her into a very familiar culture - maybe that's why this book & CD is so impressive and sympathetic to Jerome Downey and all he stood for.  As she says 'Jerome's favourite method of communication was to sing' and he was certainly highly respected for this in his community, with no musical ambition to do more than sing his songs in convivial surroundings.  Mind you, he also played the fiddle and accordion, and is quoted here as saying "The greatest thing in the world, you know, is music - if the Lord made anything better, he kept it to himself!"

The book and CD are available from: www.gracenotepublications.co.uk