The late John Johnson (1916-96) of Strange Creek in Braxton County, West Virginia was the sort of figure around whom legends easily grow.  A man of many and varied talents and an inquiring, restless mind he was not readily constrained by his mountain upbringing, first joining the Army and then travelling the length and breadth of the US as an itinerant worker. 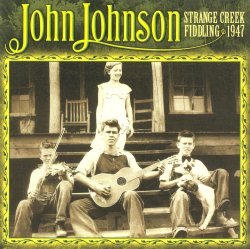 He was a master of many manual trades, had an enviable reputation as an athlete and strong man, and was an accomplished poet and painter as well as a musician.  Indeed, he was already something of a legendary figure in West Virginia fiddling when he made these recordings at the relatively young age of 31.

The 23 tracks presented here have been selected from 80 sides recorded by Professor Louis Chappell of West Virginia University over a concentrated two day session in August 1947 using a homemade aluminium-disc recording machine - some four days after his historic recording session with the great Edden (Edwin) Hammons.  Since then Johnson's legend has continued to grow among fiddle enthusiasts.  Chappell is reputed to have considered him Hammons' equal and others have compared him to the great Ed Haley.  Despite 'discovery' by the Old-Time fiddle revival in the late 1970s as far as I know these are the only recordings he made, which can only have helped maintain their legendary status.

Before we go any further let's make it clear that the music on this CD is not really on a par with the extant recordings of Hammons and Haley.  It's quite possible that at his peak Johnson was a comparable figure, but anyone expecting music of exactly the same stature on this disc will be disappointed.  To be fair, it has to be remembered that when these recordings were made he had not played for several years and didn't even own a fiddle - he had to borrow one from Chappell.  This is not immediately obvious.  There is a slight awkwardness now and again, especially in his noting fingers which tend to occasionally bluff the adjacent string in typical beginners fashion, and there's one glorious pause-clunk in Wagoner when the end of the bow seems to slip off the string (we've all done it).  But these are minor problems, his technique is seriously impressive by any standard, and quite astonishing given the conditions under which he was performing.

More significant is a certain lack of maturity - we are talking the perrenial problems of youthful musicians here: technique without taste and energy without sensitivity.  This may seem an odd criticism of a man of 31 but remember his playing had been frozen in late youth.  I don't want to overstate this, it is more a subtle tendency than a glaring characteristic, but it is evident on some of the more modern pieces - blues, rags and Radio influenced breakdowns.  His Down Yonder for example, seems to me to verge on clichķ and pastiche.  However, the older style cross-tuned breakdowns are quite another matter - these are clearly what he had grown up with, and it shows.

If this CD is not the stuff of legend, those who are prepared to moderate their expectations will not be disappointed - this is still excellent music, full of skill, creativity, energy and real beauty.  His bowing is particularly impressive and co-ordination with the left hand on the rapid passages faultless.  The second time I played this I deliberately concentrated on the bowing and the word 'masterful' kept springing to mind, especially on the older breakdowns like Jimmy Johnson, Georgia Town and Grey Eagle.

Incidentally, in John Blisard's notes he comments that the first thing you noticed about John's playing was the 'powerful bowing and the rich full tone it produced.  Even on a cheap, poor fiddle John pulled a wonderful soundģ' and goes on to describe his tone as 'startling'.  Well the tone on this disc sounds fairly ordinary to me - pleasant enough but hardly 'startling'.  Blisard clearly knows what he's talking about and one inevitably suspects that the combined effects of home made aluminium discs and digital remastering have simply obscured the real sound of Johnson's playing, for a start probably suppressing the higher frequencies which are crucial to a fiddle's resonance.

The bulk of the music here falls into one of two distinct groups.  Firstly we have a large number of archaic sounding breakdowns in cross-tuned A, which make heavy use of shuffle bowing and drones and are directly comparable with the older fiddle music of many other areas of the southern Appalachians.  It is on these that his playing is most mature and powerful.  The logical presumption is that this is older material and an older style learnt directly from local fiddlers like Edden Hammons, Dorvel Hill, and his mentor Cheney Armstrong (John's father was so impressed by his ten year old son's abilities that he paid the 72 year old Armstrong a dollar a day plus room and board to be a live-in teacher for two years.  Incidentally, Armstrong himself would have been 10 in about 1864, and if he had also learnt off a 72 year old at that age, said ancient would have been born around 1792 - which has to make you think about continuity and tradition and stuff).

Secondly, we have a large body of blues inflected Rags in C and G, which make heavy use of single string passages interspersed with jazzy chords, and an equally heavy use of slides.  The sleeve-notes relate these to Texas influence.  Personally I seem to hear a lot of Arthur Smith in there, but as John was apparently capable of imitating most of the leading Radio fiddlers of the day it's probably pointless trying to pin down one specific person.  The point is that at the time this was relatively modern music traceable to recent record and radio - Johnson was no isolated hillbilly living in some 18th century time warp, whatever the probable antiquity of his 'other' core repertoire and style.

There are also a smaller group of tunes which form a kind of bridge between the two main groups and which we might classify as 'raggy breakdowns'.  These are traditional dance tunes of genuine vintage, but in rather notey and elaborate settings making much less use of drones and short bow strokes and with a strong bluesy edge, and usually cast in G or D.  Many of these tunes were staples of mid-20th century Radio fiddling and have long been 'standards' known to fiddlers throughout the South - Turkey in the Straw and Mississippi Sawyer are good examples here, though his excellent five part rendition of Forked Deer is the most impressive performance within this sub-genre, and in this case I think comes directly from Arthur Smith's version (I don't have it to hand for direct comparison).

This is not the entirety of the music here though, and there are some fascinating oddities, such as Polka (a particularly nice variant of Jenny Lind Polka), Laddie (strangely reminiscent of The Rochdale Coconut Dance!) Garfield's March (probably learnt from the Clark Kessinger record) and White Pilgrim - a nice example of the now largely defunct tradition of song-air playing.  It features some bluesy swoops and slides that seem to be imitating vocal decorations, and I wonder if it is local singing style rather than Arthur Smith/Nashville that is the source of similar moments in some of the older style 'A' breakdowns - listen to Piney Mountain and Gilderoy for example.

One nice thing about this disc deserves particular mention - the playing is unaccompanied!  I'm well aware that fiddlers of his generation usually preferred to have back-up but to my ears the older style dance fiddling - as on his 'A' breakdowns - is heard to best advantage either solo, with another fiddle, or with simple percussion (spoons, say, or stepping) and I could do without the guitars and banjos that seem to be seen as obligatory in many similar recording projects, especially in recent times.  Having said that, the Rags and Radio Breakdowns are in a style meant to have back-up and probably suffer as much as the older material gains by its omission.  But what the hell, Chappell wasn't hosting a commercial session and I prefer the older stuff anyway.

If this disc represents around a quarter of the tunes recorded by Chappell from Johnson, it is a fragment of the six hundred or so discs he apparently deposited in the WVU archives, the fruit of some ten years dedicated collecting throughout the state.  The University Press are to be congratulated for their initial attempts at making some of that music available to the public with this disc and the wonderful 2-volume Edden Hammons set.  Indeed, I understand that if you contact them they will do you a copy of almost anything in their archive for a small administrative fee which is nothing short of bloody incredible and makes some of our archive-keepers look like a bunch of anally-retentive penny-pinching jobsworths (ever tried asking Leeds City Library if you can photocopy an old fiddle manuscript no one else has even looked at since deposition in 1898?  You haven't livedģ  And can you imagine the newly privatised BBC Sound Archives even contemplating a project like this record?ģ.)  Clearly they deserve only praise and encouragement, and I hesitate to criticize any aspect of this production, but the accompanying booklet is perhaps a trifle sparse - particularly as it seems Johnson left a several hundred page autobiography, a few fascinating extracts of which are included, and his sister is apparently still very much alive and happy to reminisce.  But perhaps I've been spoiled by having to review so many of Mark Wilson's North American Traditions Series (Rounder) discs, each of which is accompanied by a miniature documentary masterpiece.  And just dig that classic '40s Bike jacket in the inner sleeve photo.

This is an excellent disc of great music.  Even if these recordings don't quite deserve their legendary status, there are worse ways that serious fiddle fans could spend their money.  Let there be no ambiguity: on record, at least, Ed Haley and Edden Hammons were better fiddlers, but this is still infinitely superior to the entire recorded output of the Fuzzy Mountain String Band or any of the other revivalist outfits that seem to dominate the 'old timey' market in both the States and Britain.  It is available (like the Hammons volumes) only from Musical Traditions Records in the UK, price Ż12.00 inc p&p.  See the Records page for ordering details.