Buddy MacMaster was born in 1924 into a Gaelic speaking home in Ontario and in 1928 moved to Judique on the isolated island of Cape Breton in the eastern province of Nova Scotia. 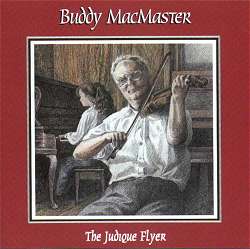 Celtic music was part his childhood through the lilting (mouth music) of his mother, fiddle playing of his father and the frequent visits of itinerant fiddlers and pipers from the isolated communities passing through Judique.

The history of why Cape Breton should be such a stronghold of Celtic fiddle music is fascinating.  During the late eighteenth and early nineteenth centuries the Highland Clearances gave rise to the large number of Scottish immigrants from the Highlands and Islands.  By 1851 there were estimated to be 120,000 Scots in Cape Breton.  The Highland traditions of Scotland were maintained and nurtured and Scottish place names were transported to the new world along with the traditional music and Gaelic language.  Geographically isolated for the first 150 years or so the music, language and cultural traditions flourished.  Buddy MacMaster was born just before a time of rapid change in communication and transportation which ended the isolation of Cape Breton and led to the rapid decline of the Gaelic language.  The traditional music however has retained its importance in the community and has gained its own unique style and stature.

Cape Breton music is dance music.  The characteristic combination of instruments for the solo and social dance is the two person band of fiddle and piano accompaniment.  I first heard Cape Breton music in the early 1990s from a recording of the Cape Breton Festival of Music at the University of Cork - it is quite unlike any other Celtic music style.  A few tracks on that recording featured 10 or so of the best Cape Breton fiddlers all playing together - they made a wildly exciting sound.  Many of the names at that festival are featured on the Judique Flyer as accompanists, composers, relatives or major influences.  The Cape Breton style is pure exhuberance born of a rich tone and a rhythmic, articulate, single stroke bowing technique from the fiddler together with a full accompaniment from the piano.  The accompaniment is busy and full with lots of syncopation, crashing chords and sweeping bass runs.  It makes very exhilarating listening - send the family out, warn the neighbours and turn up the volume.

This recording is the essence of Cape Breton music performed by the acknowledged Master of the genre and featuring all his favourite pianists young and old.  Another key characteristic of this music is the living tradition.  Buddy MacMaster has selected not only 14 different pianists of all ages to play on 14 separate tracks but the selection of music encompasses traditional Scottish fiddle music from three centuries together with contemporary compositions by the friends, neighbours and relatives.  As I was reading the comprehensive CD liner notes I was struck by the descriptions of the family dynasties and network of friends that have shaped Cape Breton music.  We are given a lot of detail in Paul MacDonald's notes on who lived next door to who, who was related to whom, who composed what for whom.  I would have found a map of Cape Breton and a few family trees helpful to see the interconnections.  It seems to me that the close community and regular contact in an isolated community forms the basis for the precision of the music – these people have been living and playing together for generations.

Buddy's selection of tunes encompasses the whole range of Scottish music: marches, strathspeys, reels, hornpipes, clogs, jigs, airs and laments.  There is guitar accompaniment on 3 tracks: on track 6 Dave MacIsaac uses the guitar to echo the fiddle triplets and they are all impeccably timed.  Extra percussive sounds come a steady subtle foot tap on most of the faster tracks and some less subtle grunts of concentration for the airs and laments.  I'm sure fiddler's grunts are born of there being no brain left over to do the breathing bits, so you just gasp when you run out of air.  Fiddler's grunts are audible on a surprising number of recordings and for me its a relief to hear them.  As a fiddler, its comforting to know that although the very best musicians like Buddy MacMaster may make it sound effortless, their brains are actually in overdrive just like the rest of us.

The endings of the tracks deserve special mention.  Each track has several tunes which slide effortlessly into the next but the endings are something else.  They just stop.  Or fall off the end of the tune.  And then add another note.  Or two.

I enjoyed all Buddy's selections, but in particular I liked track 9 with Mac Morin accompanying.  It is a suberb example of the style - impeccably timed, emphatic rhythmic accompaniment with intricate chords flying all over the keyboard.  But I think track 10 is my favourite with Hilda Chaisson accompanying.  Its just sheer musicial exhuberance with three tunes by contemporary Cape Breton composer Jerry Holland and Willie Hunter's Cape Breton Fiddler's Welcome to Shetland.  There is an almost-planned ending.

The liner notes are excellent, if at times it's difficult to follow all the relatives.  It includes a wonderful story which sums up the essence of Cape Breton music in the context of it's community.  Buddy worked on the Judique rail line for most of his working life from 1943 to retirement in 1988.  For part of that time he worked as a telegraph operator on the night shift.  As part his signing off calls late at night to the other operators he would play them a tune.  Once word of these nightly concerts got about, other divisions asked to be patched to share in the music.

Any musicians reading this, just consider for a moment how that would go down as we all sit at our desks and get the urge to serenade the screen…..

Enjoy the Judique Flyer - the Cape Breton tradition cannot come much better than this.