A Drop in the Ocean

A Drop in the Ocean is the latest collection of tunes emanating from the resourceful Josephine Keegan, the renowned fiddler and piano accompanist.  However, unlike Lifeswork and The Keegan Tunes, this new anthology compiles a selection of the tunes Josephine has been assiduously gathering since she was a child. 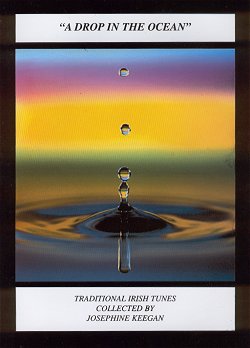 Indeed, to prove such, there is even a reproduction of one of her first manuscripts, written when she was aged around ten, and consisting of The Fall of Ballisodare, learnt from a 78 rpm recording by the Kincora Céilí Band, and two Michael Coleman reels acquired by a similar method.  As she notes herself, her penmanship might not have been the world's best, but to record these tunes from memory at such a young age was a remarkable feat.

To term A Drop in the Ocean a 'selection', frankly underestimates the sheer importance of this collection.  In its bare bones it draws together 260 reels, 54 hornpipes, 131 double jigs, 46 single jigs, 26 slip jigs, 33 miscellaneous tunes and 58 melodies recently composed by other musicians; in other words, more than 600 tunes in total.  Added to that is a discography of the five albums recorded by Josephine, a typically cogent and lucid introduction by Nicholas Carolan, a summary of her musical career (translated into six languages, although which actual language described as 'Chinese' is uncertain) and a piece by Josephine explaining how she became interested in collecting music and went about her task.

This mission began in her early days at boarding school in Newry (Our Lady's Convent of Mercy, to be exact) at which she was enrolled because childhood asthma prevented her attendance at a local school in South Armagh.  Her first intention had been to recall the tunes learnt from her flute-playing father, Joe, or from her family's collection of 78s, especially those which were not included in the music books she owned.  Later, realizing both the importance and implicit weakness of the tradition by which tunes are passed on from one musician to another, she began her mission to save 'endangered' tunes.

Collaring musicians whenever she was able, she embarked upon her undertaking.  While studying in Belfast in the 1950s she met Jack Maguire, Seán McGuire's father, who passed on old tunes from County Cavan and, back home in Mullaghbawn, travelled to Crossmaglen to copy a hand-written collection of music.  Later she would follow a similar course with a collection possessed by the family of the late Tommy Gunn (Josephine does not mention this by name, but it is possible to speculate that it might have been The Gunn Book, for more information on which see the review of Hidden Fermanagh).

The advent of the reel-to-reel tape recorder offered Josephine the opportunity to copy broadcasts of radio programmes, but, above all, there was contact with her fellow musicians (and Josephine seems to have known virtually every musician of note over the last fifty or so years!)  She corresponded with Leo Rowsome and Paddy Canny.  Paddy Cronin sent tapes from Boston and Nicky McAuliffe from Kerry.  Paddy Fahy, Seán McGuire, Seán (fiddle) Ryan and Joe Burke all proved to be valuable sources, while time spent in London saw contact with Finbarr Dwyer, Jimmy Power, Bobby Casey and many other musicians.  Josephine collected from all over Ireland, meeting musicians in person or, on occasion, even notating a melody lilted over the telephone wires.

So, the bulk of A Drop in the Ocean consists of these valuable gleanings and will provide much delight to musicians searching for a new tune to learn.  The closing section pays tribute to contemporary composers, mainly from Ireland, but also including a few from Canada plus one each from Brooklyn, Texas and France.  One certainly values and understands Josephine's desire to draw attention to her fellow-composers, but, in many ways, this is the weakest part of the book.  Josephine supplies no reason why these musicians have been selected rather than others and, indeed, the Paul Cranford entry appears in part (thanks to a scan of its cover) to be no more than a plug for Paul's Lighthouse Collection of tunes (estimable though it is).

For some reason too, the font size of each notation here is double that of those which appear in the main section.  This has the effect of suggesting that a recent composition is of more value than, say, a hornpipe written by Paddy Fahy.  Also this segment features a number of photographs of dubious value, including Billy McComiskey and his son Seán in the presence of Bill and Hilary Clinton and one of a pianist called Ethel Fraser, the subject of a tune composed by 'Red' Mike McDonald, a piano tuner from Nova Scotia.  Some photographs of, say, Paddy Canny, Martin Mulhaire or Paddy Fahy, placed at appropriate earlier points in the text would have been utterly preferable.

Although the tunes have been transcribed unscathed, the book overall suffers from poor design.  For instance, there is no title page and the contents page includes a (presumably) hastily added sticker asserting Josephine Keegan's copyright.  Some of the textual sections have clearly been organised by a typesetter unfamiliar with the concept of paragraph indentation and much of the text would have benefited from more exacting proof-reading.  All of Aidan Crossey's tunes, for instance, are ascribed to 'Aiden Crossey' and Dan Healy appears as both himself and 'Dan Healey' in adjacent lines.  However, worst of all is the page devoted to a previous Josephine Keegan collection, The Keegan Tunes, which describes that book as 'the full colour bonk'.  Then there is the fact that pages 107 to 114 (consisting of the first 24 double jigs) have been omitted by the printer from the copy of the book reviewed here.

There is also a puzzling last page which consists of Patrick Kavanagh's poem A Christmas Childhood and the lyrics to the song Easter Snow, the presence of which is neither noted in the 'Contents' nor explained.

However, do not be deterred by these quibbles (although check your intended purchase for page gaps if in a shop), for there's more than enough superb musical content to demand your attention.

For further details regarding this book and its predecessor, The Keegan Tunes, contact ceolcamloch@hotmail.com