This collection, assembled by Mark Wilson and John Harrod, captures a sampling of old-time banjo performances styles found in the eastern Bluegrass and mountain regions of Kentucky.  Although all the musicians here live in a fairly narrowly defined geographical area, there is a great deal of variance in technique and repertoire. 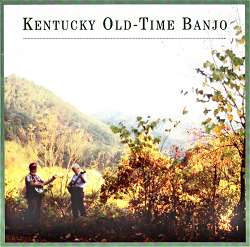 Wilson points out in the liner notes that it would be difficult to isolate any common denominator that clearly defines 'Kentucky old-time banjo.'  While this is true, the music represented on this CD is quite distinct from that of what one hear in, say, North Carolina.  In general, the feel is gentler, more subdued and less syncopated than Fred Cockerham from North Carolina or Wade Ward from Virginia.  The predominant approach throughout this album is one based upon the style generally referred to today as 'clawhammer' or 'frailing,' though in Kentucky it is often called 'rapping' or 'knocking.'   When utilizing this style, the player strikes the melody notes downward with the back of a finger (usually the index finger) and uses the thumb to sound a drone on the fifth string.  In a more complex variation of this style, called 'drop thumbing,' the thumb will sometimes play some of the melody notes on one of the other strings.  This style is generally agreed upon as being African in origin and has been documented as far back as the early nineteenth century.  Some of the performers heard here reported having difficulty in getting this basic technique just right when they were learning to play and therefore devised alternative means of getting an overall similar sound.  For instance, Buell Kazee, who had difficulty mastering the drop-thumb technique, 'pulled off' with his left hand in order to maintain a fluid rhythm in his playing.  Bert Gavin approximated the sound of rapping by picking the melody notes upward with his index finger.  Travis Wells also used an up-picking approach to playing the melody.

Although the 'knocking' style is the prevalent sound heard on this CD, other styles often heard throughout eastern Kentucky are well-represented in this collection as well.  Blanche Coldiron, from Heathen Ridge, plays in a thumb-lead, two-finger picking style on the well-known fiddle tune, Devil's Dream, the nonsense song, Hot Corn, and a couple of tunes she wrote, Heathen Ridge Stomp and Mama's Breakdown.  The late great Roscoe Holcomb is heard utilizing this technique, though with very different sounding results, accompanying his own singing on Swannanoa Mountain and John Henry.  On the latter piece he abruptly switches playing styles and frails the tune once through at the end.  Paul Smith, of Hardy, demonstrates a straightforward two-finger style on Roll On, Buddy, Roll On.  Smith, who is probably best known for his playing with fiddler Owen 'Snake' Chapman, also plays in a more modern, highly syncopated three-finger style loosely based on Scruggs-style bluegrass banjo playing.  Though his is a melodic approach, Smith avoids the mechanistic trappings of the 'Keith-style' style once popular among some bluegrass players.  On what is probably the most unusual track in this collection, Omar Hook gives us an example of three-finger, 'classical-style' banjo on his performance of Home Sweet Home, which was taken from a home recording made in the early 1960s.

Another interesting aspect of this CD is that Wilson and Harrod have managed to include examples of a wide range of playing styles placed in a number of different musical contexts.  There are a number of pieces that are clearly meant to be played as solo banjo pieces.  Others are banjo versions of fiddle tunes, such as Razor Wolfinbarger's adaptation of Little Boy Working on the Road, a tune associated with J W Day.  Dora May Wagers, who was once a member of the Coon Creek Girls, plays instrumental versions of Wild Bill Jones and Young Edward, songs once widely sung throughout the mountains.  Then there are several examples of the banjo used to accompany singing, most notably on the cuts featuring Roscoe Holcomb and Buell Kazee.  Asa Martin may be heard singing Hawk's Got a Chicken and Gone, to the twin frailed banjo accompaniment of Vernon and Zora Judd.  Finally, we hear the banjo in duets with a fiddle and within the context of the string band.  Earl Thomas, with Billy Stamper on fiddle, plays a regional tune called Granny Went to Meeting with Her Old Shoes On and the well-known Chicken Reel.  Bert Gavin, with J P Fraley on fiddle and J P's daughter, Danielle on guitar, can be heard playing Stagolee and The Fun's All Over.  Jim Gaskin and Asa Martin join Buell Kazee on Soldier's Joy, while Paul Smith, also a fine fiddler, and Roger Cooper on guitar form a band around Bert Hatfield's banjo on Sourwood Mountain.

The performances on this collection are of high quality throughout, this despite the advanced age of many of the musicians.  The CD comes with a 30-page booklet containing extensive and well written notes about the musicians and the tunes.  There are a number of photographs of most of the musicians featured on the recordings.  All of this makes for an informative as well as an enjoyable listening experience.