Leading Klezmer authority Dr Martin Schwartz revamps his seminal anthology which appeared, on Folklyric 9034, over a decade ago.  A dozen of those original tracks are reprised here, and he digs deeper into his enviable collection of 78s to offer a further twelve titles. 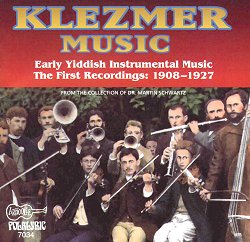 And while a number of vintage Klezmer CD compilations have appeared in the interim, on Global Village, on Trikont and (in part) on Fremeaux, there is little duplication, so that even the most die-hard collector will find much that is new to them in Schwartz's selection.  Those extracts which survive from the vinyl version are in generally cleaner condition.

Like the Gypsies, Jewish musicians were widespread throughout much of south-eastern Europe and the eastern Mediterranean around the turn of the century.  In common with many Old World traditions, however, extensive documentation had to wait for the major recording companies to 'discover' the first generation of immigrants into the United States, so that all but seven of these two dozen items are New York recordings.  Indicating the flexibility of the genre, the compilation ranges from solo button accordion, through melody instruments with rhythmic backing by piano or cymbalom (hammer dulcimer), to sizeable ensembles such as Boibriker Kappelle.  This latter group - featuring, among others brand name leaders Abe Schwartz and Dave Tarras - manage to generate a tremendously full sound.

Exhibiting his incredible diverse techniques, on Fihren Die Mechutonim Aheim maestro Naftule Brandwein gets a beautiful clean tone from his clarinet, evoking a wistful feeling of saudade (sound clip); while on Turkische Yalle Vey Uve his clarinet is like a mountain stream, sparkling and effervescent, constantly leaping and bending notes.  On Kallarash he is up to his usual stylistic tricks (for further exposition see my review of a CD devoted entirely to him elsewhere on this site), squeezing notes into those characteristic 'laughing' passages, much maligned by some critics.  On Yiddish Chusedel violinist Max Leibowitz uses a similar bag of tricks, as he appears to deliberately imitate a clarinet; while the anonymous cornetist on Kleft co Vlachibo goes for the same effect.  Evidently all of these musicians are attempting to attain a specific stylistic archetype considered essential to the genre.

Virtuoso accordionist Mishka Ziganoff fairly barrels along on Koilen, as he augments the melody with cascading triplets and much octaving and managing to sound a little like John J Kimmel at times.

Another virtuoso, Jacob Hoffman, makes fascinating, and unusual, use of the xylophone (sound clip), causing me to wonder to what extent this instrument was used traditionally (Schwartz doesn't mention it).  H Steiner, on Haneros Haluli, achieves a weird tone from his violin which I've never heard before, almost as if he is playing solely on the harmonics. 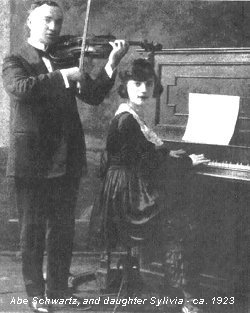 From a slow and graceful movement Kallarash descends into Spike Jones territory, with manic slide whistle - or is it, as Schwartz maintains

(on page 9) 'produced by blowing on a disc' - and cymbal crashing (sound clip).  Similar, though more contained, chaos is reprised by an Abe Schwartz line-up on Der Shtiller Bulgar.

Though perhaps a little surprising to Western sensibilities, the use of the cymbalom as appropriate backing instrument follows a widespread eastern European tradition its use in a synagogue context in 1860s Russia is noted by Schwartz on page 13 - and is represented by three tracks here.  The unidentified player on Doina (Pt.1) has some trouble following the flute lead, though, especially towards the end as the melody unexpectedly modulates elsewhere.

On Sadigurer-Chusid it takes centre stage in the hands of master player Joseph Moskowitz (sound clip).  If this is to your taste, as it is to mine, then a check out a whole CD devoted to Moskowitz's early recordings which has appeared recently on Rounder.

Remastering of the original discs is generally good throughout.  Unsurprisingly, the oldest recordings, notably Sirba and Haneros Haluli, exhibit the greatest signs of wear and tear, but even these defects are not too distracting.  Considering that nine decades have elapsed since Orchestra Orfeon committed their music to wax any criticism of sound quality would be unjustified carping; and I'm certainly pleased to hear these vintage tracks in any condition.

Certainly no quibbles this time about the lack of discographical details.  Martin Schwartz gives everything known, and these are considerably fuller, by and large, than the state of knowledge at the date of the vinyl issue.  Schwartz really is the historian of the genre - another of his highly recommended compilations is Yikhes, oh the Trikont label - and both his commentary and musicological analysis are exemplary.  Tunes are cross-referenced to other versions, not only within the Jewish tradition but also that of gentile eastern Europeans, Greeks and even Egyptians; while not even popular recordings by such artists as Bunny Goodman or the Original Dixieland Jazz Band escape his scrutiny.

I'm delighted to report enthusiastically on yet another in an almost endless line of winners from Chris Strachwitz.  Can his sainthood be far off?