The title track, the first on the album, was the triumphant fanfare that heralded the launch of Claddagh records in 1966.  Leo Rowsome at the height of his powers and reputation, all regulators blazing, drones resonating like ship-sirens, provides one of those historic memorable moments of recorded Irish music for me, along with O'Neil's March on 'O'Riada Sa Gaiety' and The Kesh Jig on the first Bothy Band album. 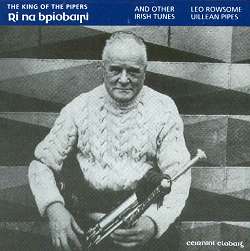 Leo Rowsome, the third generation of an unbroken dynasty of uilleann pipers, which now has matured to its fifth generation in the person of renowned performer Kevin Rowsome and shows no sign of stopping.

Of course the tune could have been named for him, and its choice was no accident.  For most devotees of traditional Irish music he was the king of the pipers.  For nearly forty years he had dominated Irish uilleann pipe music and set a standard and style that was well-nigh universal for all that time.  In De Valera's Ireland he could be said to have fulfilled the role of official state piper, as the best-known exponent of Ireland's second national instrument ... second, because it had somehow been ranked (inexplicably, by judges unknown) after the harp!  Besides playing the pipes he also built them, in their various combinations and pitches, and crafted the reeds to give them voice.  He taught novices to play their first stumbling notes, coached the competent and honed the experts according to his precepts, which included a dress code - pipers should reflect that they were the senior members of the Irish bardic tradition, treasure-stores of Irish culture, and should therefore always dress as smartly as they could when performing.

Well-known across the whole of the country through frequent performances on the radio, he had been recording gramophone 78s since the twenties, not scorning to experiment in his choice of melody or accompanying instruments - although the results of some combinations were more startling than successful.  In the mid-thirties he published his Tutor for the Uilleann Pipes which was for decades the only teach-yourself book on the subject - I still have the copy which Matt Kiernan stuffed in the box with my first half-set before mailing it off to me on a fateful day in 1968.  One year later I stood by Leo Rowsome as he performed the Derry Air in the entrance hall of the Neptune Hotel in Bettystown at the 2nd Tionol of Na Piobairi Uilleann, surrounded by pipers of all ages - and many a damp eye in the house, given that the troubles were beginning to take root in the North.  At that time the redoubtable Brendan Breathnach, founder of NPU, could fit most of the uilleann pipers of the world, which included meself as an apprentice of little worth, into one group photograph (try to do that now!)  Front-row centre was reserved for the three pipers who were considered to have contributed the most to the preservation of the instrument, Seamus Ennis, Willie Clancy and, of course, Leo Rowsome.

What made Leo Rowsome more distinctive than any other piper before (and maybe since) was his mastery of the regulators, that unique feature of the Uilleann pipes which allows chords to be played by pressing keys, usually with the right wrist, on a set of three additional pipes arranged parallel to the drones across the knee.  Leo Rowsome developed amazing virtuosity with this feature, which can be tricky to use, to say the least.  As an ambassador of Irish piping he was able to highlight that particular characteristic of the instrument which set it apart from other forms of bagpipe.  Whether he was playing a rake of reels or a clatter of jigs, or delivering one of the grand old slow airs, the regulators were used to produce effects of sometimes breathtaking sonority.  The fact that he was an expert reed-maker and pipe-maker ensured that his instrument was beautifully in tune.  It's notoriously difficult to get chanter, regulators and drones to be in tune on all notes in the range.

Equally recognisable was Leo Rowsome's chanter style.  He played the 'open' rolling style of piping - that is, not shutting off the air supply from one note before starting the next.  It delivered an exhuberant open-air character, well-suited to crossroad dances or country fairs, and was much used by the travelling pipers for busking.  Some of the classic 'pippety-pop' runs can still be heard, but they are just added spice to the overall drive of the performance.

As I said earlier, he was a pipe-maker and reed-maker all his life, one of a very select few in those years.  All Rowsome sets had a distinctive sound.  The concerts sets were immediately recognisable, with particular echoing 'honk' to the drones, and a crystalline tone on the regulators.  Armed with good reeds Rowsome pipes were probably the most resonating sets ever produced, well demonstrating the old nickname 'The Irish Organ'.  He was the maker of Sean Seery's set, considered to be the most beautiful example of the instrument of its day.  Rowsome full-sets were always in demand, and were widely in evidence at Bettystown and subsequent early conventions of Na Piobairi Uilleann.

So much for the background.  It's important to put the man and his music into context.  It would be fair to say that the preferred style for piping has changed significantly over the years since this recording was made.  A new generation had arrived that was to adopt a crisper chanter style, with little or no regulator work, an inclination towards lower-pitched pipes and a preference for jeans and shirtsleeves.

For this album Leo Rowsome put together a carefully balanced programme of piping classics to create a piping master-class.'King of the Pipers' is followed by Carolans's Concerto (linked with Planxty Davis - never for me the happiest of marriages).  His definitive version of The Coolin is followed by a glorious pair of classic jigs The Pipe on the Hob and The Bride's Favourite (feared by fiddlers for its relentless arpeggios).  Then the Fox Chase, in all its parts, in what has become the 'official' version.  And then An Buchaill Caol Dubh (the Dark Slender Boy), a hauntingly beautiful slow air, which is actually an elegy to a freshly poured glass of stout.

The original record's first side ended with a brace of rollicking reels and a planxty to lighten the mood.  You turned over the record and set it off again, and were treated to a new delight as Leo Rowsome switches to a 'flat' set of pipes for the rest of the programme.  These are pitched in C, one tone below the pitch of the more usual 'concert' set.  Only one tone lower, but such a distinct difference to the sound - somehow more subtle, chanter more honeyed in tone, drones that growl from an earlier age of piping.  The choice of the opening piece, The Battle of Aughrim, seems to reflect that difference of time zone.  This is followed by a pair of Kerry Slides, music from a wilder, more isolated, less fashionable (then) part of Ireland.  More pieces, carefully balancing the programme still, until what is for me the climax of the album, the air The Death of Staker Wallace, which I think has never been bettered - I do believe it might even be one of my eight records on the desert island.  The performance is then closed off with a pair of slip jigs, and The Derry Hornpipe in all its glorious variations.

This CD is an opportunity to incorporate into your collection one of the recording milestones of Irish piping.  An album which, if you have not heard it before, will broaden your understanding of the instrument and how it can be played, or, if you have, will constitute a valued item in any collection of the pipe music.  I am delighted to have had the opportunity to let off some enthusiastic steam about it.