Language of the Blues: from Alcorub to Zuzu 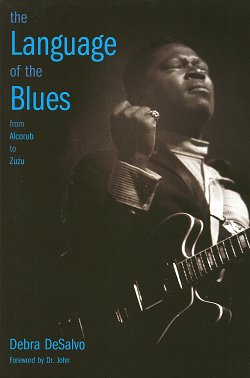 As a blues neophyte, young, naive and innocent, I wasn’t exactly up to the mark when I first heard John Lee ‘Sonny Boy’ Williamson’s Elevator Woman.  In fact, unsullied soul that I was, I assumed it must be about a female lift attendant!  Some years later, and a little wiser in the ways of the words, I heard the line ‘I got a woman in a white folks yard’, and took it to be a veiled reference to pimping and prostitution.  Throw in a few more misunderstandings over pigfoot, white dog, mess around, and dirty butter and you can see why I felt the need for a comprehensive lexicon of blues terminology.  I’m sorry to say that, forty odd years later, this isn’t it.

In fact the book, described by its author as ‘an anecdotal dictionary’, is a series of encyclopaedia type entries, some of them fairly lengthy, on less than 150 pieces of blues and blues related jargon.  To get to them you have to negotiate, or better still ignore, an annoyingly ‘Hi man, how ya doin’’ type foreword by the pianist Dr John, which left me wondering who his tobacco supplier is.

Of necessity, the range of terms discussed is quite limited.  In fact none of the ones I’ve mentioned appear in the list of entries.  Moreover, there seems to be quite a bit of inconsistency in the selection of topics.  For example, Memphis gets an entry, but Chicago doesn’t.  Stavin’ Chain, whom the author claims as ‘a 19th-century railworker of legendary strength and stamina’, but doesn’t produce any evidence, is safely ensconced between Spoonful and Stingaree.  However, that other legendary railroad worker, John Henry, doesn’t appear to be ensconced anywhere.

One expects selectivity in books such as this, and I could forgive it here if the author hadn’t padded the chosen entries out with so much irrelevant detail.  For instance, a four-page discourse on Crossroads (as in Crossroads Blues) relates Robert Johnson’s supposed pact with the devil, before discussing Johnson himself.  It then goes on to survey various African superstitions about crosses and cross roads before turning its attention to Robert Jr Lockwood, Johnson’s one time protégé.  That’s not bad going when the author practically admits there is nothing more than hearsay to link Crossroads Blues with supposed supernatural intervention into Johnson’s musical talent.

Even more padding arises from the fact that Ms DeSalvo delves into the presumed African roots of the music (without giving adequate consideration to the effects of white acculturation on the slave population).  This frequently involves an outline of the etymology of whatever word is under discussion, and that engenders two further problems.

First of all, in a book which is concerned with word usage, there is not much to be gained from discussing word origins.  Secondly, the tracing of etymologies is a notoriously inaccurate enterprise, especially when delving among the Babel of languages that is sub-Saharan Africa.  Moreover, the author frequently ignores the possibility that some of these words might be European in origin.  For instance, I always believed that the word chick, meaning a smart young female, stems from the English expression, chicken or chick-a-biddy; ie, a term of endearment for a young child.  Maybe it does, maybe it doesn’t, but the author should not have ignored the possibility that multiple explanations for word derivations can frequently arise.

Similarly, we are told that the idea of coolness stems from a Yoruba concept (itutu), meaning to ‘connect with one’s inner divinity’.  Be that as it may, modern jazz fans will tell you that the word came into use in the late 1940s, to describe the introverted styles of playing of musicians such as Miles Davis and John Lewis.  It was coined, not to describe any inner connection between these musicians’ inner selves and their music, but to highlight the fact that their way of playing was the antithesis of the hot styles which up to then had predominated in jazz.

This kind of pseudo origins analysis used to bedevil folklore studies, and still exists in certain quarters where the light of reason has yet to penetrate.  So it is disappointing to find it being adopted in an idiom where writers usually know better.  In the light of some of her comments, I'm left wondering what Ms DeSalvo would make of Irish crossroads dancing.

She also gives insufficient weight to the possibility that expressions can have multiple meanings or shades of meaning.  Thus we are told that Cold In Hand means to be financially broke.  That’s true, but it can also mean that the singer has endured other hardships, eg, the loss of their sexual partner.  And there are several entries for words which are in much wider usage than just the blues.  So, there is an entry for Motherfucker, and there are two entries which deal with the topic of cock sucking.  In Negro parlance this does not, apparently deal with female to male fellatio, but the exact reverse.  Unfortunately, the nearest she can get to an illustration of its existence in blues lyrics is the following couplet from Louise Johnson:

‘Well, I’m going to Memphis, stop at Church’s Hall
Show these women how to cock it on the wall’

As a quote from blues researcher David Evans shows in the very next paragraph, ‘cocking it on the wall’ meant to engage in sex outdoors in a standing position.

The author is on much better ground where the she discusses less controvertible topics, and there are worthwhile sections covering levees, rambing and hoboing, amongst others.  Also, it is extensively cross-referenced, so that seekers after Alcorub will find Canned Heat and Jake emboldened in the text.  Unfortunately, there is no index, so anyone trying to find out what sterno is (the substance from which canned heat is extracted), could end up wading through quite a lot of print.

The book struck me as too superficial to be worth doing a detailed check for accuracy.  In any event, I think that should be Winin’ Boy Blues, not Windin’ Boy.  Also, Robert Johnson - The Complete Recording should be in the plural; and the John Lee Hooker CD which features the band Canned Heat is surely Hooker ‘n Heat, not The Healer.

These are incidental errors, which a more careful proof reading would have picked up.  However, a paragraph about Charley Patton’s recording career may give a clearer idea of the book’s calibre.  It says that Patton recorded 29 songs in New York in 1934, for the American Record Company (actually Vocalion, who by that time had been absorbed by ARC, but were still functioning under their own name), that these were re-released in the mid 1960s, and that this re-release sparked off the current wave of interest in Patton.

First of all, Pattonites are pretty well agreed that the Vocalion sides are markedly inferior to his earlier recordings for Paramount.  That is hardly surprising, for he was ill at the time and died shortly afterwards.  Secondly, I’m not sure whether Ms DeSalvo is talking about the two volume Origin Jazz Library, Immortal Charlie Patton (1962 and 1964, OJL 1 and 7 respectively.), or Yazoo’s double LP, Founder of the Delta Blues (1967, L-1020).  However, the amount of Vocalion material on either set is minuscule compared to the Paramounts.  In fact, I get the impression that Ms DeSalvo did not realise that Patton had a substantial recording career behind him well before those Vocalion sessions.  After Robert Johnson, Charley Patton is probably the most thoroughly researched bluesman on the planet.  I am surprised therefore, that her information came not from any published work, but from personal correspondence with one Steve LaVere.  Things like this suggest that the book is not only anecdotal but under-researched.

The entries are extensively annotated, although the Charley Patton source was not the only one to cause me a bit of eyebrow raising.  I have no reason to doubt that indentured Irish labourers (here described as forced conscripts) were brought into the Mississippi Delta to work on the levees.  However, this information should have been checked against a proper authority.  By no stretch of the imagination could Ireland’s Own be regarded as a credible source.  Incidentally, I wonder if Ms DeSalvo can point to any empirical evidence that ‘haunting Irish folksongs of pain and woe influenced the developing blues’.  I certainly can’t.

Against these shortcomings, the author draws heavily on her own interview material and some of this could yield valuable insights.  Unfortunately, whilst interview sources are annotated, and quotes from other interviewers are properly acknowledged, the dates and locations of those carried out by the present author are not given.  Also, while most of the entries include an itemisation of relevant song titles and artists, neophyte blues fans would have benefitted from being told which reissues to find them on.

Overall, The Language Of The Blues seems aimed at the younger blues fan, the not too experienced, and the dilettante.  Seekers after pot-boilers and departure lounge reading will love it, and barroom bores will have themselves a field day.  The rest of us are probably too discerning and too long in the mojo tooth to find much useful material here that we didn’t know already.