You can guess that I am not a man who has to buy a lot of CDs these days.  In my exalted position, many of the review copies for MT pass through my hands, and I have to admit to grabbing all the northern Italian, Sardinian, and most of the English ones for my own fell purposes. 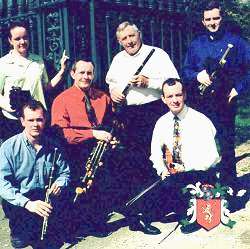 Most of the others I pass on to those with a better claim to them, only pausing to snatch the occasional Irish offering which particularly takes my ear.

It was with profound regret that I selflessly did just that with this disc (passing it on to that fine uilleann piper, Tomás Lynch) - but regretted it almost immediately and actually paid good money out of my own pocket for a second copy ... which was then borrowed (long term) by another Irish friend.  Having at last retrieved it, I have found that it's one of those records that I impose on even the most casual visitor to the house if the slightest of opportunities presents itself.  Cries of "When did you last hear anything like this?" are to be heard almost daily.  Since the CD has come to mean so much to me, I though that a second review - from an outsider's perspective - might be appropriate.

This is a very unusual record in almost every respect.  The music of Leitrim is not terribly well-known out of Ireland (or even within Ireland, to many of the younger generations) and the McNamara family is not a name on everyone's lips - though it should be.  A six-piece family band is also somewhat unusual, and one fronted by two sets of pipes must be as rare as hen's teeth.  It would seem that only recent advances in uilleann pipe-making technology have made it possible to get sets of pipes which will stay reliably in-tune for long enough to allow for the possibility of the tight unison and harmony playing displayed here by brothers Brian and Ray.

Then there's the record itself - encouraged and supported by the local PP, number 1 on the Drumlin label, with startlingly bright graphics (no Celtic mists here) and with no distribution except Alan O'Leary's Copperplate.  Not at all what you'd expect would turn out to be the most enjoyable record of Irish music I've heard since the lovely Johnny O'Leary CD from Craft in 1997.  But all this stuff is actually peripheral ... what really counts is the music and how it's played - and both are stunning!

The tunes are all local - either unique to the South Leitrim tradition or local variants of nationally known pieces.  Many were learned by Michael McNamara from local heroes like John Blessing, Thomas Canning, Jim Rawle, Pee Fitzpatrick, Bernie and Jimmy McKiernan and the Reilly family.  The remainder are from the recently re-dicovered manusripts of Stephen Grier (1883) and Alex Sutherland (early 1900s).  Readers familiar with Reg Hall's writings will realise that this means they were set down before the Gaelic League began re-inventing Irish musical history in the early part of this century:

'The Gaelic League's proscription of what it believed was foreign material resulted in a section of the rural repertory rarely being represented in radio programmes, and certainly not being tolerated at Gaelic-revival events, while the League's approval of what it believed was genuinely Irish boosted that section of the repertory.  Thus, in music competitions at feiseanna, for example, the reel, jig and hornpipe were given equal status and playing time, while tunes for the barndance, schottische and waltz were disallowed, which was a distortion of the values then current among rural musicians themselves.

The presentation of instrumental music on the feis competition stage and on the radio took it one step away from its primary rural function as dance music towards programme music.  In particular, the march - with no rural indoor function - entered the repertory of the ceilidh band for competition, radio and records, and slow-air performance - a comparative rarity in domestic music-making - became a criterion for measuring not only a fiddle or flute player's ability but his or her true feeling for Irish music.  New tunes were introduced into rural repertories from the worlds of ceilidh dance and stepdance, most significantly the slip-jig and the most common setdance tunes, such as

The Blackbird, The Job of Journey Work and Rodney's Glory from the printed tune collections of O'Neill.

The Gaelic League's influence made some rural music-makers self-conscious about their inherited repertory and made them devalue parts of it in their own esteem.  Apart from contributing to a reshaping of repertory, the League, in promoting slow airs and marches, introduced a nationalist dimension to music-making.  Under this influence some rural musicians in Ireland began to think of their music as Irish rather than simply as their own music.'

Or, from a different source - Proinsias de Roiste in his 'Note on Irish Dancing', Nodlag 1927, in the Roche Collection of Traditional Irish Music, wrote:

'It was unfortunate that in the general scheme to recreate an Irish Ireland, the work of preserving or reviving our old national dances should have largely fallen to the lot of those who were but poorly equipped for the task.  For the most part they were lacking in insight and a due appreciation of the pure old style, and had, as it appears, but a slender knowledge of the old repertoire ....  The musicians were, apparently as slack in tunes as most others proved to have been in dances ....  The spectacular and difficult dances for the few were cultivated to the neglect of the simple ones for the many, leaving the social side untouched except to criticise or condemn ....  The ballroom dances in vogue at the time were the quadrilles or sets, lancers, valse, polka, schottische or barn dance, two step and mazurka.  These were all banned and nothing put in their place but for a couple of long dances.  An exception should have been made, one would imagine, in favour of the popular old Sets, if only on account of the fine old tunes with which they were associated, but they were decried amongst the rest.'

Moreover, the tunes from the South Lietrim aural tradition are mostly found in styles passed on from a prevous era.  To quote the full and interesting booklet notes: 'It is quite remarkable that such a small area managed to retain so much of its unique style in spite of the all-pervading influence of recordings emanating from the US in the 1920s, '30s and '40s ... reels featuring the older type four-bar parts predominate'.

So this CD contains music which is generally of an older vintage than what will be familiar to many of today's lovers of Irish music.  And while not being an avid espouser of the 'old is best' maxim, I must say that what's on offer here does appeal to me enormously - and did so even before I read the booklet and discovered its pedigree.  The reason is simple - while I've never heard most of these tunes before, they sound almost familiar ... it's stuff I can relate to in a way which is rare when listening to the music of another country.

I suppose I run the risk of offending some of my Irish friends and readers (again!) if I say that there used to be a strand of common repertoire running through the repertoires of the rural people of all these islands - in the days before we English so effectively lost our music.  But it's true, nonetheless - and I can recognise it in the playing of the likes of Johnny O'Leary, numerous concertina and one-row melodeon players from country areas ... and in the music of the McNamara family.

But, at first hearing, it wasn't the repertoire which caught my attention - but the style in which it is played ... and so we come on to perhaps the most unusual aspect of this CD.  Track one sounds completely conventional - four reels played fairly fast by the full band in the tight, crisp, modern style I have come to expect of most of the Irish music CDs which land on my doormat.  I carried on with my shredded wheat, unmoved.  On track 2, and every one of the other 16 remaining tracks, it seems as if the band had somehow been transported back in time three or four generations ... yet managing to take their modern instruments, skills and recording equipment with them!  I still hadn't finished my bowl of cereal at the end of the 71 minutes playing-time.

I don't quite know how to describe playing which sounds as crisp and clean as anything out of Cork University,

yet as if it came off a 1920's 78, somehow simultaneously.  Luckily, I don't need to - here's a sound clip from Track 2, the Leitrim Quickstep / Moll Roe from the Grier MS, played by Brian (pipes), Enda (fiddle), Deirdre (concertina), with Mick Giblin on guitar back-up.

Track 3 includes a local version of The Shaskeen which makes good use of the twin uilleann pipes (with fine piano back-up from Frank Kelly).

The family's tune notes tell us that it's more or less the same tune as the well-known reel - indeed, that it appears as a reel in the Grier MS - "but it plays better as a hornpipe!"  This comment seems to speak volumes about the McNamaras' approach to their music - and I can only agree with them!  (sound clip - The Shaskeen Hornpipe)

Jigs, reels and hornpipes predominate, but there's also the slip-jig set mentioned above with The Barony on the front of Leitrim Quickstep / Moll Roe, and a couple of Airs.

One is very attractive - Síle Ní Ghadhra, played as an air, a jig and a florid, old-fashioned 'piece'.  Call me an old romantic, but this is lovely stuff - heard in this clip with the repeats removed to make it of a sensible length for a download.

Having spent so much of my life knocking around the Cotswolds, it will surprise no one that I'm rather partial to a good hornpipe - and Morgan's is a good one.  Supposedly written by Parazotti, it's usually found in the tradition as The Banks, but this four-part version comes from Grier, including the variations.

There's only room to let you hear the first 45 seconds or so of the nearly six minute track, but it does give you an idea of how good a fiddler Enda McNamara is.  How many other 1990's bands would give over this much time on their first record to one soloist playing so slowly?

Not all of the music is slow-paced, but it does keep well away from the break-neck speeds we have become used to hearing.  To quote the admirable Charlie Lennon from the booklet,

the tempi are such as to "ensure that each piece is given time to breathe freely and express its own characteristics, a welcome change from some of the present day offerings."  Here's the concertina and fiddle playing the reel Miss Dunbarr, again from the Grier MS, and apparently unknown elsewhere.

I've never been sure if the CD's title was intended to apply to the McNamara family or the wonderful music they play - or both.  Both are certainly deserving of the accolade, and we should all be deeply grateful that these treasures are no longer hidden.  My Irish music record of the year so far - without any doubt.