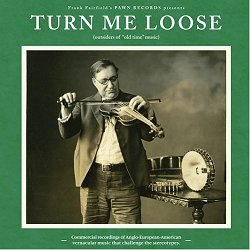 Subtitled "Commercial recordings of Anglo-European-American vernacular music that challenge the stereotypes", this is a second selection of 78rpm recordings mainly from the collection of American musician Frank Fairfield.

1  According to the very short introduction, "The purpose of this collection is to present examples of Anglo-European-American vernacular music that do not so easily fit into what is commonly referred to as 'folk', 'traditional' or 'old-time' music today."  But, if "vernacular music" embraces categories such as 'folk', 'traditional' and 'old-time', then surely this is a somewhat contradictory statement.  I suppose that it is the sort of thing that contributors to the Mudcat Café love to argue about ad infinitum.  On the other hand, we might rather say that what we have here is a really fascinating collection of little-known and seldom-heard musical gems.

Let's begin with the opening track, a version of the well-known fiddle tune Waggoner, played by Bob Skiles Four Old Timers, a family band from Texas.  The band comprises Bob Skiles on fiddle, his mother on piano, and his two sons playing banjo and … tuba.  And I guess that the tuba is the reason for this tracks appearance here.  Yes, it is unusual to hear a brass instrument playing in a so-called string band, but let's not forget that there was once a tradition of German "oom-pah" bands in Texas, so perhaps the tuba is not that odd after all.  And what about that piano?  The Tweedy Brother's version of Chicken Reel is played on fiddle and piano, the latter being described in the notes as "eccentric".  Well, the pianist does get a little over-involved in the middle of the recording, but then so did many other old-time piano players, such as Al Hopkins (of The Hillbillies), Hobart Smith and Haywood Blevins.

2  Clarice Shelor, who played the piano on her family band recordings, was perhaps more reserved, but, at the end of the day, the piano was probably more common in old-time music than we like to suppose.

3  Bacon and Cabbage, is included because Fred Shriver accompanies fiddler Blind Joe Mangrum on the piano-accordion.  The pair recorded two tracks in a 1928 (not 1927, as the CD notes state) session, and these tracks are available on the Document CD Nashville, 1928 (DOCD-8037).  Luckily, the sound on the Tompkins Square CD is of much better quality than that on the Document CD and offers us one of the CD's outstanding performances.  One other track, the South Georgia Highballers' Mister Johnson Turn Me Aloose, also features an "unusual" instrument, a "whimsical" musical saw.  It is certainly different, but, for me, the main interest is the statement that the band learnt the piece from a 1901 recording by Silas Leachman.  We know that many American performers, especially blues singers such as Robert Johnson, were influenced by earlier recordings, but a 1901 recording is certainly early.

Mister Johnson Turn Me Aloose was written in 1896 by Ben Harney ("The Father of Ragtime") and there are several other pieces included here that probably date from the same period.  The Whale Did, I Know He Did by Frank Rice and Ernest Stokes ("Mustard and Gravy", who were billed as "Dixie's Tastiest Combination") is a retelling of the Jonah legend - one which, interestingly, turns up all over the place in different cultures and not just in the Old Testament.  It was recorded in 1938 and issued on a Bluebird 78 together with a version of the old Child ballad Five Nights' Experience (BB B-7905).  Mister Johnson Turn Me Aloose comes with "non-vocal sounds" and is just the sort of thing that could, I suppose, have been included on the Old Hat double CD, Good For What Ails You - Music of the Medicine Shows 1926 - 1937.

4  Don't Get One Woman On Your Mind by Willard Hodgin no doubt dates from the era of the Minstrel Shows, with the addition of a few floating verses.  Hodkin accompanies himself on a strummed banjo and gives us verses such as:

I went down to Georgia, had never been there before,
Found the white folks in feather beds and the n….rs on the floor.

which may have sounded fine in 1928, but not necessarily so today.  Homer Davenport was another banjo player, though more in the "classic" finger-picking style of, say, Vess L Ossman or Fred Van Eps.  Davenport's Down in Tennessee Blues, his only known solo recorded piece, was cut when he turned up with brothers Jess and Alvin Young for a 1925 Gennett session.

If there is a guitar equivalent to the "classic" finger-picking style, then Alphus McFadyen's 1927 recording of Arkansas Traveler/Turkey in the Straw fits the bill nicely.  McFadyen was recorded in Atlanta, which indicates that he was probably from one of the Southern states, though, like the CD notes, I am unable to add anything further on him.  The tunes proceed at a rather stately pace, unlike, say, the contemporary recordings of Sam McGee which are characterised by their liveliness.

5  The CD's other guitar solo, Lemuel Turner's Way Down Yonder Blues, on the other hand, is a slide blues played in the style of Blind Willie McTell or Blind Willie Johnson.  Turner recorded four sides, all guitar solos, in Memphis in 1928 - Way Down Yonder Blues, Tramp Waltz, Jake Bottle Blues and Beautiful Eyes of Virginia - and belonged to a group of white performers who chose to play and record the blues.

6  Mythological Blues, however, is not a blues at all.  Written by one Ernest Rogers (1897-1967) an Atlanta journalist and future author (he wrote at least two books, Peachtree Parade and The Old Hokum Bucket) it is a delightful romp through classical mythology.  It opens with these words:

In this day and time when we're on the go,
We're apt to think that the ancients were slow.
But just jump back, 10,000 years,
And it beats anything the modern man hears.

and continues with verses such as:

Old Hercules pulling all the caveman stuff,
Treating all the women powerful rough.
And when it came to speed,
That Mercury boy was way out in the lead.

According to the CD notes, Rogers' Mythological Blues was included because: "there's a prevalent generalized image of the down-home southeastern musicians who made records in the '20s and '30s as toothless, barefoot, ignorant, hillbillies: in fact many of them were highly educated people."  And this reminds me of something that English song collector Peter Kennedy once said to me.  When he went into a new village looking for songs, he would always seek out the most intelligent person that he could find.  They were the people who knew the singers.  You didn't look for the village idiot!

The final four tracks are all instrumentals.  Ladies' Quadrille, played by The Happy Hayseeds from Stockton, California (not an area that produced many old-time musicians in those days) is a lively dance tune, reminiscent of the music of Mellie Dunham.

7  Incidentally, the photograph on the CD's front sleeve of the Hayseed's fiddler, Fred Laam.  John Baltzell's Money Musk Medley also belongs to the Dunham stable of fiddle music.  Baltzell recorded quite a number of tunes with old-world titles, London Polka, Gilderoy's Reel, Drunken Sailor Medley, Flowers at (sic) Edinburgh, Highland Fling, The Gal I Left Behind and Paddy Ryan's Favourite Irish Jig, as well as American classics such as The Arkansas Traveler (sic) and Turkey in the Straw.  I don't know if Baltzell had Scottish ancestry, but Money Musk Medley would not sound out-of-place on a Beltona 78.  The Schottische Caliope is played by two brothers, Dempson and Denmon Lewis, who were originally from Texas, though they later settled in New Mexuco.  The piece has a slight Tex-Mex feel to it, rather like the music of the Gu-Achi fiddlers of Arizona.

8  According to the CD notes, the tune's title may be a feminine given name in Spanish.  And, lastly, we have a really good version of Dill Pickles Rag recorded by McLaughlin's Old Time Melody Makers at a 1928 Memphis session.  It is said that Charles L Johnson's 1906 composition sold over a million copies of the sheet music and several old-time bands recorded the tune, including The Corn Cob Crushers, the Four Pickled Peppers, Midkiff, Spencer & Blake, Smith's Garage Fiddle Band and The Swift Jewel Cowboys.  Now, there's a collection of names to conjure with!

As I said above, Turn Me Loose - Outsiders of "Old-Time" Music is a fascinating collection of little-known early recordings that really do deserve to be heard.  All praise then to Frank Fairfield and Tompkin Square Records.  Let's hope that this is only the first in a forthcoming series!

1.  The first Frank Fairfield collection was Unheard Ofs & Forgotten Abouts - Rare and unheralded gramophone recordings from around the world (1916 - 1964), which contains sixteen recordings from such diverse places as Scotland (a track of Pipe-Major Henry Forsyth playing Hundred Pipers/Miss Drummond of Perth/Sleepy Maggie), Japan, the Sudan, China and Indonesia.  I especially like a French track - 'Un Pied Dans L'eau' - sung and played on the chromatic button accordion and the Auvergnat bagpipe, the cabrette.

5.  I would especially cite McGee's Buck Dancer's Choice, which can be heard on the Document CD Sam McGee (DOCD-8036).