Buddy MacMaster is an icon of Cape Breton music.  Born to Gaelic-speaking parents in 1924, his playing straddles the gap between old Highland dance music - as played by Gaelic-speaking fiddlers until the early and mid 20th century - 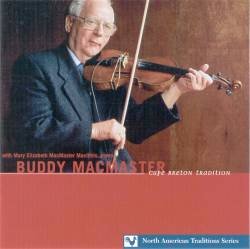 and the newer, more polished styles that emerged via popularisers such as Winston 'Scotty' Fitzgerald.  Perhaps his individual take on the music - firmly rooted in the past but with a touch of modern 'sweetness' - is what has led to his nearly universal adoration.  More than any Cape Breton fiddler, Buddy has made a mark on Scotland, teaching and performing at places such as Ceòlas, Sabhal Mòr Ostaig and Celtic Connections.  Despite being on the stage since1949, he has only made a handful of commercial recording.  So, for someone who is often regarded as the best living Cape Breton fiddler, each new release is a bit of an event.

Despite being nearly 80 years old, Buddy can still 'drive 'er' with the vitality of a man half his age.  This album is brimming over with classics from time immemorial, such as the stonkers of track 12, in high-bass tuning, which begin with Christy Campbell in perfect form and end with the wild Margaree reel.  Buddy's infectious playing reveals all these old tunes for the true gems that they are.  The amount of contemporary tunes, including ones from composers such as young Andrea Beaton and David Greenberg, shows that he is still growing and assimilating fresh material.  A highlight of the album is the unplanned set (track 14), which combines Dan Hughie MacEachern's The Bell Piano with such classics as The King's Reel, Miss Lyall and Sandy Cameron's.  Satisfying, intuitive piano accompaniment is provided throughout by daughter Mary Elizabeth MacMaster MacInnis.

As we have come to expect from them, producers Burt Feintuch and Mark Wilson supply liner notes and biographical detail of the highest quality.  All in all, this album is a rich and personal musical portrait, of an artist whose inimitable skill and dedication is inspirational.