Some thirty years ago, when I was a budding guitarist, I saw Gordon Giltrap for the first time.  The brilliant English acoustic guitarist was performing at a local church hall.  I just couldn't work out how he was getting all these notes out of one guitar and two hands, I kept looking for an extra finger or tape recorder. 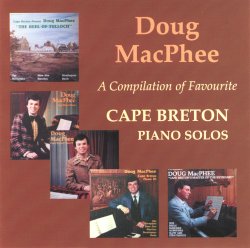 Now, as a budded pianist, I had a very similar feeling when I listened to the new CD from Doug Macphee, A Compilation of Favourite Cape Breton Piano Solos.  Doug plays a fiddle tune with his right hand, and accompanies himself with his left hand.  Sounds simple, but try sitting down at your piano and have a go.  I did - and I can't.

The compilation comprises eighteen tracks taken from five previous recordings made in the seventies and eighties, they are Doug's favourite selection.  The tunes will be very familiar to lovers of Scottish and Cape Breton music, many of the tracks move through the strathspey into the reel in time honoured fashion.  To me, Doug's playing of a strathspey helps me understand the point of this style.  He has a relaxed left hand accompanying a beautifully staccato right hand with all the lift and drop of a fiddle playing a strathspey.  Some of the faster tunes have a very crowded left hand that I found hard to distinguish sometimes.

The choice of tracks is good and representative, from the mellow pastoral air, Miss Maria Carr, track 8, which leads nicely into a good example of a strathspey interpretation H Mackworth, through hornpipes such as track 1 The Shamrock which has an almost ragtime lilt.  There are marches, jigs, and reels and I liked the variations on a lively version of The Mason's Apron, track 18.

Track 14, the Five Hands Jig Medley is a multi-track version with three right hands and two left hands; an interesting experiment, but I preferred the simplicity of the live tracks.  There are various guitar and bass accompanists through the CD, I especially liked the bass counterpoint to the chords on some tracks.

The CD is an interesting view of recording changes over the twelve years.  Some of the early tracks sound very live, with a homespun acoustic piano sound, and the definition of the accompanying instruments a bit vague.  The later tracks are clearer and better defined, with a well tuned acoustic or digital piano sound.  The spirited playing is evident the whole way through.

Doug MacPhee is a virtuoso pianist in his tradition, no doubt.  Having grown up in Nova Scotia, the son of Margaret, he would hear his mother play the traditional tunes accompanying fiddle players and he developed his style from an early age.  You can really hear the influence of the fiddle in his interpretation of the tunes - his accurate replication of a Scottish fiddle is at times astonishing.

Apart from representing a great threat to the livelihood of Cape Breton fiddle players, Doug Macphee shows great affection to the tunes and great interpretation of the style.  One for the collection.