At a recent appearance at Musical Traditions Club Dónal Maguire showed he has lost none of his ability to put across an unaccompanied Irish song with integrity and relevant style with a focus on the song rather than the performance - with the bonus of a strong, flexible voice well suited to rolling decorations and with affecting sensual notes in the lower range.  His interpretation of The Star of Sunday’s Well is the most intelligent and intelligible-making I have heard of this song and little-known gems included were Wild Rover from Petie Curran (of the Usher Family whom Dónal started to record in 1974 after leaving his native Co Louth) and The Banks of Dunmore, a song of Catholic conversion with a rare reference to transubstantiation (I had never heard this one before and asked Kevin Mitchell - of course he knows it!).  Long may Dónal continue in this vein, despite indications on his recent CD (Gilded Chains and Sordid Affluence) and interview in Living Tradition of widening his scope to include singer-songwriter material and experimenting with jazz-tinged instrumental backings.

Emigrating to England at 15 and, as a "city-slicker from Drogheda", claiming Radio Luxembourg, Buddy Holly and The Clancy Brothers as his early influences as much the tape of singers from the Connemara Gaeltacht he heard at a Youth Club, Dónal makes no claims to being a traditional singer 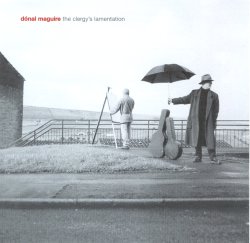 ("...  there is a hell of a difference between being a traditional singer and a singer of traditional songs, which I am." Living Tradition).  Nonetheless the combination of feeling, intelligent interpretation and technique make Dónal, for me, one of the best interpreters of Irish song - certainly on this side of the water.

So, standout tracks for me are the unaccompanied.  From The Clergy’s Lamentation 1980 (abbreviated as CL):

The Generous Lover shows Dónal at his best: assured decoration and low notes on this lovely air with its big vocal range (sound clip).  Decorations are integrated, not obtrusive or pyrotechnic but subtle, understated, intricate.  (I have always wondered how much Bert Lloyd wrote of this song, never having been able to trace it further back satisfactorily.)

Similarly on The Grand Conversation on Napoleon (from Tom Costello) there is effortless intricate decorated delivery of this big song with its wide-ranging air - Dónal displaying his skills but relishing the song, its words and tune and what intricacies can be naturally incorporated.  In places the pace seems a bit rushed: but this is better than dragging it out (as is the self-regarding tendency of many singers who enjoy the beauty of their own voice!).

The Shamrock Shore.  That gorgeous twisting air with its thrilling low modal notes!  Paul Brady made it his own but Dónal does too - no imitation, it’s just that the Brady version is so familiar to memory.  Again no histrionics - Dónal harks from an era (the Critics’ Group and the Revival of the early '70s) of good plain singing and respect for the song rather than the ego of the singer.  This respect you still find in traditional singers’ circles in Ireland (Inishowen, Nenagh, Forkill) but in recorded music and its imitators in clubs in both Britain and Ireland it’s rare today to find such an honest approach.

To some these songs are perhaps over-familiar from British folk clubs of the '70s - but to me they are classics with continuing appeal to singers for their wonderful airs and the vocal challenges they present.

The first track on Gilded Chains and Sordid Affluence 2001 (abbreviated as GCSA) signals a change of direction: a soaring soprano saxophone introduction signals that this isn’t going to be one for the purists! 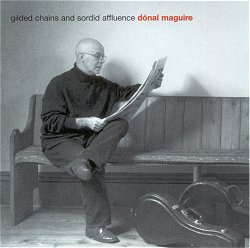 There are only two unaccompanied songs on this CD: the second track, Johnny Doyle is less successful than those on The Clergy’s Lamentation. Why the pauses?  In places they are held so long it sounds like he’s forgotten the words.  Dónal adopts a straight style on this subtly comic song.  Most performers build up the humour more broadly as it progresses - here the humour doesn’t really surface.  As a comic singer Dónal is heard to better effect on the aforementioned Star of Sunday’s Well or on Paddy and the Ass (CL).  This widely known comic song associated with the great Fermanagh singer Maggy Murphy (Dónal’s version is from Tom Costello, Spiddal, Co Galway) puts over a serious political point with wit.  "Paddy" in London, mocked by the disrespectful "ill-bred" cockney, turns the tables and gets his own back, challenging the Punch type stereotypes of the era.

But on O’Reilly from the County Leitrim (GCSA), Dónal is again on top form on this big song of longing and unrequited love.  In good and flexible voice, creating a very sensual fluid line, there’s skilful handling of the flattened notes and velvet low tones and he holds on to the nyaah right through the word endings.

And your snow-white breast it would make a portion for a noble lord or an Irish king
For you are youthful, fair and handsome and you are fitting to be a queen
I wish I was in battle wounded and your beautiful face I had never seen.

(It is interesting to compare Kevin Mitchell’s O’Reilly from the County Cavan. To a somewhat different air, his version does not include the poetic imagery of the stanza featured on the sound clip of Dónal.  Kevin features the clearly articulated rhythmic decorations characteristic of the Ulster style while Dónal employs a more fluid sean-nós style.)

Similar qualities of singing persist on the tracks sung to John Murphy’s uilleann pipes drones - what a seductive sound!  On An Druimfhionn Donn Dőlis [sic on sleeve and booklet] (The Sweet Brown Cow) there is the gorgeous sound of low voice sinuously thrusting against pipes drone (sound clip).  Inevitably this must be measured against Tim Lyons’ intensely passionate version but this is a beautiful piece of music, which would introduce the song to an audience beyond the strictly traditional.  (Note - where did this impassioned anti-landlord piece originate?  Dónal credits Tim Lyons and writer John Walsh from Derry.  Tim Lyons says the words are known in Gaelic to a traditional slow air: he thinks he learnt it from Brian Byrne in the Critics’ era of the '60s.)

Less successful with pipes backing is Wheels of the World, the19th century Belfast broadside ballad much recorded today for its references to "spinning" in the political sense.  Here the production is at fault; the pipes come in loud and clear then the vocals too far down in the mix.  The guitar seems like someone vamping in the background not being familiar with the material, a bit off-rhythm.  A strong vocal performance but the backing does it no favours.  The guitar after a while makes the track unlistenable, what a relief when it comes to the acappella unison ending (I think this is double-tracked Dónal)!

I very much enjoy Dónal’s singing.  The problems I have are with accompaniments and indeed with the instrumentals.  Dónal is a proficient enough mandolin player but I just prefer this instrument in a bluegrass context - personal prejudice perhaps!

On CL there are five sets of tunes, which have the feel of "session tunes", i.e.  more enjoyed by the players than the listeners!  In fact this CD is a bit like a session - too many tunes with the odd vocal gem if you’re lucky, if the musicians give space for a while!

The two sets of tunes on GCSA are pleasant enough though on the jigs; The Bells of Boulick, Paddy Taylor’s the guitar seems rushed, so that the pipes end up skittering uncomfortably over the tune.  The changeover from the sublime An Druimfhionn Donn Dőlis into the instrumental which follows is a bit of a jolt into mediocrity, unfortunately.

Dónal has clearly been exploring song arrangement over the years.  Apologies to Wendy Stewart (on CL) but I just can’t accept pretty harp sound as suitable for song accompaniment, so this detracts from the performances of Bonny Labouring Boy and Pride of Gencoe.  On All Things are Quite Silent, Dónal succumbs to the influence of English revival folk at its drabbest, dull vocal against "tasteful " harp.

More successful are the arrangements on GCSA with pipes and sax respectively, as already mentioned.  The excursions into recently written songs (My Own Sunrise by Canadian Brad Roberts and Let Me Go by American Carol Elizabeth Jones) don’t do much for me though here guitarist Mike Walker’s expertise is heard to much better effect than on the Irish material, and there’s a nice backing vocal from Julie Thompson.

Where it all comes together is on: The Lily.  On first hearing The Lily I assumed it was a Northern Irish traditional song in the vein of The Orange Lily but it is by that thought-provoking London - based writer John Pole (much appreciated by singers looking for good material, too little known in his own right) *.  An enigmatic song; is the flowery imagery a reworking of the familiar emblems of seduction or is there a political meaning underlying the scarlet flower with milk white roots?  The song would repay study and the performance invites repeated listening.  Again that seductive sound of voice against pipes drone with the welcome addition of Jan Maguire’s voice in unison on the refrain.  Song, backing, arrangement all come together here.  A compelling performance.

The lily is a fine flower, there’s one grows in my garden

And though her roots are white as milk her blooms are blood red scarlet
It’s a fine flower, the lily.

The appropriately plain storytelling style here reminds me that Dónal’s next CD will be of his many fine ballads (such as John Barber).  Something to look forward to - but I wonder what new excursions into arrangement can we expect?

* And indeed John Pole visited Musical Traditions Club when Dónal performed on 15th February, 2002, and contributed a fierce performance of his Punch and Judy.