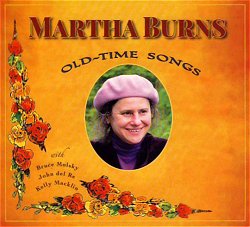 My usual procedure when reviewing a record is to read the booklet notes while listening, the first time through - then listen again, if I've liked it (or hated it) enough to wish to.  With this record I had a rather unusual experience; I wasn't sure I was going to like it at first but, by the time I'd finished reading the booklet, I'd decided that I liked it very much!  Somehow, Martha had won me over through her comments on the songs, more than by the quality of her singing and playing.  That sounds as if I disliked her singing and playing - which is not at all the case - but I found that I liked it all the more because of what she'd written about the songs.

Martha Burns' name was new to me, although I have a feeling that I must have seen her somewhere - the face seems vaguely familiar.  Her 'old-time songs' are not the sort of things I normally listen to either, 'that mix of folk and cosmopolitan influences ... that, in my mind, partly defines "old-time" music' - although I don't think all of the songs included here quite fit her description.  Certainly the first two do, but I got a real surprise with track 3 The Rose Tree, a Sacred Harp type song - to the tune of a Bampton corner dance!  Martha is joined by John del Re (low harmony) and Kelly Macklin (high harmony) on this, and it's a real delight.

The next song to jump out at me was Poor Soldier, a Frank Proffitt number he got from his aunt, Nancy Prather.  Sung unaccompanied, in that high and lonesome style, this Civil War song, from the point of view of the wife left back at home, is truly affecting.  Most of the songs on this CD are accompanied by Martha's perfectly judged guitar playing - simple, unobtrusive, lovely.  It was something of a surprise, therefore, to find on the next few tracks some really neat short guitar licks and solos between some verses - very well played, but never flashy.

Track 12, Salem is another Sacred Harp type song - splendid, but far too short!  I won't go on at any length about more of the songs, which mostly aren't my sort of thing but, seeing that I've said quite a bit about her song notes, I'd like to share with you Martha's note to Don't Leave the Farm.

"Those who labour in the earth are the chosen people of God, if ever he had a chosen people, whose breasts he has made his peculiar deposit for substantial and genuine virtue."  So Thomas Jefferson proclaimed in 1787.  The association of farming with virtue and cities with vice originated among European and American intellectuals in the late-eighteenth century in response to the challenges of growing industrialization.  In the nineteenth century, vast changes in the American landscape and economy before and, especially, after the Civil War - this song first appeared in 1871 - gave the idea enormous popular resonance in a nation that was still overwhelmingly rural.

The fact is, it continues to resonate for many of us.  It does for me.  But the city indeed "has many attractions," and my own contrary impulses are never resolved.  That's where my thoughts go when I sing this song.

That, I hope, gives you a idea of why I like this CD so much ... and why I'd really like to meet Martha Burns.  Her CD is available from Amazon.