It's a well-known fact, but worth repeating every so often, that when major US conglomerate record companies such as RCA Victor and Columbia lost interest in both recording and issuing authentic traditional music after the second war, the slack was picked up by numerous small, sometimes minuscule, regional labels.  Their market was the immediate locality and as far afield into migrant markets as resources and opportunity (not to mention a hefty slice of good fortune) would allow.

And so to the vintage, rare as hen's teeth, 78rpm shellac discs reissued in excellent sound quality on this recent CD from the Chris Strachwitz empire, at whose feet all lovers of numerous forms of authentic and syncretic ethnic music worship.  Some time back Strachwitz purchased the rights and archives of the Ideal label, out of Alice (later Hot Springs), Texas, and has been issuing a steady stream of CDs from this source. 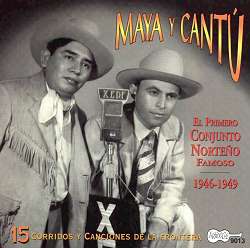 Like the originals, these too, it appears, are aimed chiefly at a localised Hispanic market, although there is an odd formatting dichotomy.  Notes appear in English only, yet, unlike many of the Tex Mex volumes he put out during the vinyl era, feature no textual translations.

The present Maya and Cantu release suffers from the same major problem already noted in my earlier review of Conjunto Bernal on this site.  A stingy fifteen tracks: merely forty-five minutes of running time.  Buy it in a shop in San Antonio and it would cost you maybe ten dollars (say seven or eight pounds).  Buy it as an import in the U.K.  and you would find yourself paying up to around thirteen pounds.  All this inevitably generates a sense of exploitation in this foreign market.  That said, I recently listened to the CD by the east Clare fiddler Paddy Canny on Clo Iar-Chonnachta (highly recommended [certainly is - Ed.]), for which I did pay thirteen pounds and the running time of which is only thirty-eight minutes.  I guess you pays your money and ...

Whether you pays your money for the present release will depend, I think, largely upon the extent of your existing interest.  The high cost of the import would almost certainly prevent any but the outrageously rich from purchasing this as an unknown musical entity.  Having taken the leap, however, you would discover the contents to be fine examples of the idiom.  Corridos (narrative ballads) and cancions (songs of less specific content) sung in Spanish (sometimes colloquial), with button accordion and bajo sexto accompaniment, supplied most often by the singers themselves.  As the tradition dictates, the majority are in jaunty 3/4 time.  Vocals are in parallel harmonies, with one voice in the (strained) high tenor register.  At times this imparts an additional tension.  On Dionicio Maldonado, for example, the harmonies are not quite right, and even the accordion coda appears to be in a different key.  In general, each three minute item features a dense concentration of text, with the accordion filling in with improvised chromatic trills during the brief break between verses,

bookended by more extended taximi (if I may be allowed to import a middle eastern term for want of one more appropriate).  That heard on Cual de Los Dos Amantes is especially nice, with Cantu 'squeezing' the reeds to create a slurring effect.  (sound clip)

Few stylistic parallels from other ethnic traditions spring immediately to mind, although if you substituted a steel guitar for the accordion, that of Howard and Dorsey Dixon from South Carolina (whose complete recorded output on four Document CDs has appeared within the past fortnight) might come close.  In many senses the words are of paramount importance, and on the three tracks in fast 2/4 rhythm where the singers are doing only that, the busier backing by other musicians, including accordion maestro Narciso Martinez (albeit adopting a rather more laid-back style than usual), tends to be rather distracting.  True to form, the corridos tell of unjustly oppressed heroes fighting against authority, often involving gunplay and other violence.  The cancions, as with folksong everywhere, chronicle the concerns, needs, desires and fantasies of the common man (though almost never the common woman): forlorn and thwarted love, migration (often enforced), the consumption of alcohol, coming to terms with premature death, and the unsullied concept of mother and home far away as idealised psychological ameliorative to harsh reality.

Having taken Chris Strachwitz to task for a set of confused and confounding sleevenotes in my review of South Texas Polka Party, elsewhere on this site, I gladly reverse that assessment for those featured here.  The present set are both informative and chronologically coherent, with nods towards informed biographical and discographical detective work where the data are weak.  A good case is made for Maya and Cantu having been the pioneer 'dueto Norteno' on disc, recording possibly as early as 1946.  As a modifier to my opening paragraph, the notes tell of Columbia expressing interest in the duo shortly after the appearance of their initial Ideal records.  But the financial terms were unacceptable and they stayed where they were.  Inevitably, once a proven sales record was established the conglomerates grabbed a slice, and Los Alegres de Teran, one of the premier Norteno acts spanning more than three decades, appeared for years on Discos Columbia.

Within their given tradition Jesus Maya and Timeteo Cantú are as good as you could ever wish to hear.  In addition to the vocal tracks we get one instrumental - unsurprisingly a polka (La Barranca - sound clip) - and only here are we made aware of exactly how good an accordion player Cantu really was.  Indeed, he could well hold his own in the company of all the great players up to that time (playing styles, as well as the instruments themselves, subsequently developed a greater degree of sophistication).  Short at two and a half minutes, it nevertheless provides a welcome diversion from the hard-hitting vocals, and more of the same would have been welcome.  Maybe on Volume 2?  See you there.