The Wind that Shakes the Barley (Hammer Dulcimer Music)

Re-issues can be interesting.  The can set you on a re-evaluation of the music of the time and of the music and style you were involved with then. 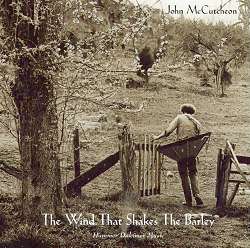 The repertoire here, played on hammer dulcimer, is composed of old favourites, some of which have slipped out of current fashion, like Planxty George Brabazon and Si Bheag Si Mhor.  It's good to hear them again and remind ourselves that traditional music is just as subject to fashion as any other.

My reaction to hearing this album again is the same as first time round - amazing levels of musicality, careful subtle arrangements, wonderful pace and rhythms and relaxed playing.  The fiddles, guitar, banjo, mandolin, and voices of the "good friends playing music together" result in many and varied textures.

For its time, there are lots of innovative ideas; experiments with playing techniques and extensions of what the hammer dulcimer could do.  There are lyrical arrangements for the instrument which exploit its harp and bell like tones to the full (Jesu Joy of Man's Desiring doesn't quite work - the main melodic theme seems to lose out).  Song accompaniments are tasteful and relevant - the Wild Rose of the Mountain is one of my favourites.  The rags and reels are controlled but restrained.  It's this restraint that I found a problem first time round and I still think the same.  Where is the vigour, energy, attack and raw edges, ie. excitement that I have/had been used to in listening to Jimmy Cooper (my main influence) and Billy Bennington.  In their playing, the tunes were respected but not to the extent where they could escape a good battering.

Listening again to Jimmy as a comparison for this review I realise that where McCutcheon is always tasteful, Jimmy was tasteful and tasty.  McCutcheon quotes (unattributed) a poetic phrase to describe the hammer dulcimer - "At once the flutter of Angels wings and the crashing of symbols".  Personally, I could do with more of the latter.  I'm a definite fan of John McCutcheon and this is a recording worth having, but his later playing and ideas are inevitably more interesting.  Sometimes that's the problem with re-issues.