When considering the music of Sligo, one instinctively thinks of the great Irish American musicians of the 1920s.  Names like Paddy Killoran, James Morrisson and most famously Michael Coleman spring to mind.  Their music, perhaps by reason of the wide availability of their recordings, was to exert a major influence on the Irish music scene for the next few decades and even today, the tunes they recorded form the basis for many a musician's repertoire.  Meanwhile, back home in Sligo, there were other musicians, more or less contemporaries of those who had emigrated to America, keeping alive another type of playing which, while showing the influence of Coleman and the like, retained elements of an older style and a local repertoire. 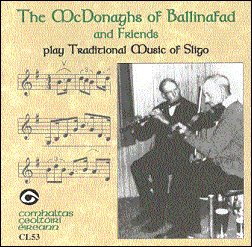 Such musicians were the three McDonagh brothers who lived their whole lives in a cottage on the side of the Curlew Mountains, near to the village of Ballinafad in southern Sligo.  It is a beautiful but wild environment and that is somehow reflected in their music.

Larry, who played the flute and fiddle, Michael Joe, who played the fiddle and Paddy who played flute and whistle were born in the early years of this century.  By the time that these recordings were made towards the end of the 1960s, Paddy had given up playing due to ill heath and what we have here are recordings of Larry on flute and Michael Joe on fiddle joined by various neighbours and friends.  The recordings were made by Paddy Ryan and Michael Daly (both of whom also play on some tracks) and by John Nicholson, in intimate surroundings, often in their own home or that of a neighbour.

Paddy Ryan will be known to many readers, for both his fiddle playing and his role in promoting Irish music (and especially for his fondness of an older style of playing) through Comhaltas Ceoltoiri Éireann (CCE) but Michael Daly probably less so.  He was a flute player from Roscommon who spent much of his life in England and must surely have been the only Irish traditional musician to become mayor of an English south coast resort - in this case, my home town of Worthing.  The other musicians heard are near neighbours of the McDonaghs, Tommy Flynn on fiddle and Michael Daly's brother-in-law, Tom Harte on bodhran.

What of the music?  Most of the recordings feature duet or trio performances with just a few solo flute tracks and one of solo fiddle.  As was usual with the older musicians and in common with RTE's recent CD issue of Elizabeth Crotty's music, these are short, single tunes, predominately reels with just a few jigs, a polka and a harp tune played as a 'piece'.  The inclusion of so many reels does give a somewhat unbalanced feel to the CD - but I am sure that what is presented here is an accurate representation of their repertoire.  The playing is essentially simple with little ornamentation, but that is what you would expect from music that was originally intended for dancing.  Paddy Ryan, in his notes, describes the playing as "hearty" and I can think of no better way to describe it.  But it is much more.  It has so much life and drive.  It made even me want to get up and dance.

The outstanding musician on display here is Larry McDonagh.  Josie McDermott, whose fine 1977 Topic LP has recently been reissued on CD by Ossian, was a friend and neighbour and apparently often played with the McDonaghs.  I found strong similarities with Josie's playing in that of Larry, particularly in his solo playing.  However, the outstanding tracks here are those that feature the brothers in duet performance.  They display the kind of understanding that can only have come with a lifetime of playing together.  Tracks like The Wind That Shakes the Barley played as a reel and the jig, The Butcher's March, show them at their very best, but perhaps the standout track is the untitled harp tune which the McDonaghs believed to have been written by Ó Carolan.  It is a beautiful tune and the only non-dance tune on the whole CD.  It is played with so much grace and style that I was left hoping for more.  It is rare today to hear a tune played as a 'piece' and the only other recorded example that I can recall is on the McNamara Family CD, Leitrim's Hidden Treasure where Sile Ni Ghandra is played as an air, a jig and a piece.

An unusual aspect of the music is the percussive effect created by Larry.  To quote from the notes "He didn't tap his foot in the ordinary way.  Instead he lifted the foot completely off the floor and smacked it back again.  He tapped the foot four times to the bar in a reel, as opposed to twice per bar as is normal.  He never went out of time but he used to miss beats at random.  He seemed to have a different set of beats for each tune and, if you took notice of this tapping, it would hold your attention almost as much as the music."  This is most certainly noticeable and after rather less than the CD's 37 tracks; the foot tapping does rather begin to dominate the music.  As a consequence, I found it easier to listen to the CD in bite size portions.

The repertoire consists, in part, of well-known tunes like The Copperplate Reel and The Fermoy Lasses.  Rather more is of local versions of tunes in general circulation and purely local pieces.  Titles like The Ballinafad Polka betray a local origin and other pieces are named after local musicians including Larry McDonagh, Brendan Tonra and Billy Brocken.

I would describe the music as functional in so far as the musicians are playing primarily for their own pleasure.  It is none the worse for that the sense of enjoyment is obvious.  These are not professional recordings but the sound quality is never less than adequate.  You will hear the occasional fluffed note and the ending of several of the tunes is rather untidy but this should not detract from your listening pleasure.

Sadly, the three bothers died some time ago, all as bachelors, and so this is their only legacy.

I am sorry to have to report that the CD notes do scant justice either to the musicians or their music.  After reading the slender booklet I still feel that I know very little about the McDonagh brothers.  Even more puzzling is the total lack of any information on the music beyond a statement that they "had a great number of rare tunes which never got into the mainstream repertoire."  It is implied that many of these were local pieces, some composed by Larry - but no sources are suggested.  With so many unusual tunes here and the CD being promoted as a record of a unique repertoire, this is a major omission.

Minor quibbles aside, this is a recording that can safely be recommended to anyone with a love for or an interest in an older style of Irish music.  If, like me, you have enjoyed the music and in particular the feel of recent offerings from various members of the Hernon, Lennon and McNamara families, then there will be much here for you to admire.  If you are a musician looking for new tunes this could be just the CD for you.  If you have heard and enjoyed it, you may like to try The Coleman Archive Vol. 1 (CC5) issued by the Coleman Heritage Centre which features musicians from the same area and of a similar generation to the McDonaghs.

The recording has been issued by CCE and so far as I can tell it is their first CD release devoted to the music of a single performer or group of performers.  One of that organisation's stated aims is "to promote Irish Traditional Music in all its forms" and in producing such a record of a musical style that is all but gone they are surely achieving just that.  According to their website, they have more than 4000 hours of archive recordings and I hope that this CD turns out to be the first of many.