An Anthology of Reported Carnivals and Galas in West Lancashire 1910 to 1910.
by J Haslett 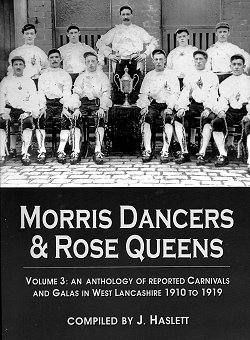 The third volume of Johnny Hazlett's ongoing series on the evolution, survival and transformation of popular culture in the west of Lancashire is as physically impressive as the the previous two.  A thick, large format hardback, with good quality white pages beautifully sewn, replete with sturdy dust jacket.  I reviewed the first two volumes in the pages of Folk Music Journal as they appeared.  Illness prevented me doing the same for this one on its publication two years ago, but a review on this site ought anyway to bring its well-deserved existence to a much wider audience.

I don't feel the need to repeat much of what I said previously, but mention must again be made of the sheer dedication and hard grind on the part of the compiler.  The endless hours of trekking from library to record office on public transport, painstakingly gathering every snippet from endless microfilms of local newspapers.  The strained eyes, the cramped hand, the numb posterior.  Then the retyping, the checking for accuracy, the seeking out of any and all appropriate photos from every known collection, the compilation of indices.  It takes an incredible amount of fortitude, diplomacy, and, yes, even physical discomfort, and is certainly not for the faint-hearted.

I empathise more than most because I did a similar thing four decades ago trying to bring into focus the comparable culture of the south Midlands, spending more hours than I can count in the quest, and often ending an eight hour day with little or even nothing to show for it.  If the evidence presented both here and in the previous two volumes by Hazlett is any yardstick the type of occasions which we both sought to document occurred far more frequently in his chosen area.

To summarise briefly, the first volume concentrated on the nineteenth century, with the morris dancers typically associated with the rush cart processions which carried the harvested rushes into the earthen-floored churches.  This may be defined as a largely working class, community-sanctioned, street-based initiative, freely enjoyed by the spectators.  As such, it was as much reviled by contemporary newspaper correspondents for its vitality and rowdiness as it was in the south Midlands.  It's abandonment is generally attributed to before 1880, but an interesting article reproduced here (on pages 225 and 226) gives the reaction of the 'Old people' to a revival in 1912 at Uppermill, whereby the cart was considered as having been constructed with 'degenerated skill' and the occasion was little more than 'an excuse for gi'en drink.'

This form of celebration gave way as the hegemony imposed by the burgeoning middle classes took firm hold and transformed it into a more formal event, usually involving a duly-elected organising committee, which was often held on a very large scale, but now in municipal spaces such as parks or recreation fields, where entrance fees could be easily imposed.  Morris dancers still processed from a rallying spot to an enclosed space as a feature of a larger procession, generally headed by a brass or silver band.  They also continued to perambulate, but it was less likely now to be from community to community and more likely to be around the outside perimeter of a field.  More pertinently, the performance (as opposed to the processional) space was now more often than not a patch of grass rather than tarmac or dirt roads, and the tread of the dancers was thus muffled, which had a knock-on effect on the requisite footwear.

Moreover, the morris dance sides now were increasingly composed of children, both male and female, with the concomitant degree of absolute adult control.  Many of the young teenaged lads who danced during the years when this volume begins, in 1910, were by late 1914 en route to France and the trenches.  As elsewhere (Bampton in Oxfordshire is one analogy) long-standing performance tradition might be at least temporarily interrupted.  Hazlett tells us (on page 214) that the Rossendale Cocoanutters (now more commonly referred to as the Bacup Nutters) failed one year to make their annual appearance because members of the troupe were away 'fighting with the colours.'  Unlike Bampton, where the Whitsuntide performance was in abeyance during 1917 and 1918, Hazlett evidently finds no performance by the Nutters during the Easter weekend of 1919.

Volume two in the series saw the early influence of Cecil Sharp's publications on the morris dance and, more practically, of Mary Neal's peripatetic Esperance tutors.  This volume begins just after the publication of Sharp's first Country Dance Book, and takes us deeper into the increasingly hide-bound influence of the nascent Folk Dance Society, headquartered in London; and no doubt the fourth (and final) volume will chronicle the formal competitions between morris sets and solo dancers which this body sponsored up and down the land.

'Rational recreation' for the working classes had been the rallying cry of reformers, both church and state, for centuries, but as shown in the present volume it had reached it apogee in the north west during the pre- and post-First War period.  If anything, there was (unsurprisingly) a decrease in the scale and frequency of celebratory activity during the four years of the war, yet it never disappeared altogether.  On occasion (perhaps more often than the newspapers reveal) any profits made during this period were donated to the war effort, wounded soldiers or the Lifeboat Fund.

This and the previous pair of volumes have an obvious regional appeal, but the evolutionary narrative which is revealed has in addition a much broader relevance to historians of popular culture elsewhere.  One application which may not have been considered by the author is that of genealogy.  Many of the reports name the morris dancers, and even more so the Rose Queen and her attendants.  An index to these names might well facilitate family history research for anyone with roots in the communities covered.

If you have any interest at all in the cultural activities enumerated above then I strongly suggest that you investigate all three volumes of Johnny Hazlett's magnum opus.  It's available directly from: johnnyhaslett@aol.com or 15 Fairhaven Road, Leyland, Preston, Lancashire PR25 1XY.