Good For What Ails You 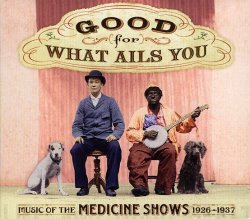 'I thought of you,' said our distinguished editor, revealing once again his uncanny knack in selecting the most apt reviewer.  As soon as this double CD arrived, however, I realised what a problem it was going to be to review.  Certainly not for any deficiencies in the product, simply that it showcases material which I love so deeply that the difficulty would be to stand far enough back and try to say something intelligent about it.  I know every note of all forty eight tracks, though some better than others.  Almost all of the featured items have been reissued before, though some not since the demise of vinyl, making them now relatively inaccessible.

In a very real sense its spiritual forebear is the pair of double vinyl albums Songsters and Saints / Vocal Traditions on Race Records (Matchbox MSEX 2001-2002, and MSEX 2003-2004), which Paul Oliver compiled as an aural adjunct to his seminal published study of the non-blues aspects of Afro-American song (Cambridge: CUP, 1984).  Indeed, the two projects share a number of tracks, with fully one third of the Afro-American material - those by Stovepipe No.1 and David Crockett, Pink Anderson and Simmie Dooley, Alec Johnson, 'Beans' Hambone-El Morrow, Memphis Sheiks, Johnson-Nelson-Porkchop, Cannon's Jug Stompers (on the vinyl) / Banjo Joe (on the CD), and Jim Jackson - having previously appeared on the Oliver sets.  In that book, Oliver briefly examined the medicine show tradition (especially pp.87-89), but the phenomenon largely fell outside of his stated remit.

The present CD balances black material with white - statistically 25 to 23 in favour of the former - which is as it should be, the original medicine shows cutting through racial boundaries, often featuring whites in blackface, whites as native Americans, and, more bizarrely, blacks in blackface (for a photograph depicting the latter two types see Oliver, p.98).  The booklet which accompanies the CD, however, gives a chilling account of the Ku Klux Klan burning a cross adjacent to one mixed-race show, after which the proprietor used only white performers (p.30).

The songs themselves are anything but politically correct; being misogomistic, racist and misogynistic in turn, and peppered with ethnic epithets which are nowadays considered politically incorrect.  But the racism is not only a one-way street.  The eerie, minor-keyed Mysterious Coon is performed by Alec Johnson, who was closely associated (on his recordings, at least) with the Chatmon/McCoy/Mississippi Sheiks aggregation, whom we know to have performed to audiences of both races.  However exaggerated this character might appear to be, he certainly had his real-life counterparts, which included some of the New Orleans pimps chronicled by Danny Barker in Buddy Bolden and the Last Days of Storyville (New York & London: Continuum, 2000).  Lyrics are also peopled with stereotypes from either side of the racial divide: henpecked husbands, simpletons of both races, filthy rich no-goods who flaunt the law, rod-riding hobos and exotic dusky maidens (one of them improbably named Simbo-Sambo, the bimbo from Jimbo Jambo town).

What we get here is a roaring selection of 19th century songster material, often having no immediately obvious connection to the medicine show in performance.  Some of the more overt string band material is a little tenuous, though certainly none the worse for that.  These include the wonderfully-raucous Gonna Swing on the Golden Gate by Fiddlin' John's Carson's Virginia Reelers, Go Along Mule (Uncle Dave Macon's Fruit Jar Drinkers) and the Carolina Ramblers' Sweet Sixteen (although we learn here that leader Charlie Poole and fiddler Lonnie Austin had played with 'Doc' Calloway's show (p.37)).  Tanner's Boarding House has a particular significance in my personal musical odyssey, being one of the first old timey tracks I became enamoured of, via its appearance during the late 1960s on the RCA Camden reissue album of post-Depression Bluebird sides, Authentic Folk Songs (CDN 5111).  Gid Tanner's exciting, syncopated fiddle style blends perfectly with the ironic and sardonic lyrics, made all the more poignant by his chunky but deadpan vocal style.  We hear him again to good effect later, on a Skillet-Lickers' track, where his characteristic falsetto echoes Riley Puckett's more deadpan delivery of It ain't gonna rain no more.  In 1929 that particular aggregation committed to commercial disc a recreation of an apparently typical 'live' performance, with their two part Kickapoo Medicine Show (Columbia 15482-D).  But they had been pipped more than a month earlier by the multi-part OKeh medicine show, which appeared on three double-sided 78s (OKeh 45380, 45391 and 45413).  Performers on all these tracks were exclusively white, but in reality cultures were frequently commingled, as, for example, the tour on which blue-yodeller Jimmie Rodgers sat side-by-side on the same platform as Memphis songster Frank Stokes (the latter heard here on I Got Mine).  Despite being obvious choices, not one of these eight sides are included here.  Although the Skillet-Lickers coupling appeared on Document DOCD-8059, Johnny Parth decided not to include the OKeh tracks on either his seven CD set of complete recordings by Fiddlin' John Carson, or his complete Frank Hutchison.  Much less tenuous is the inclusion of Pink Anderson's rendition of Papa's 'Bout to Get Mad, recorded only four years after the pair of photographs showing him with 'Doc' Kerr's show in 1924 (pp.28 & 35).

The substantial booklet is simply a joy, plumbing the depths of research way beyond anything we could possibly have hoped for.  The illustrations are varied, rare and mainly new to me, depicting actual performers, advertising matter, 78 rpm record labels, covers of published songsters, and containers of the 'magical' cure-alls.  Marshall Wyatt's essay documenting the development of the medicine shows is a ground-breaking piece of research, as radical in its own way as both the afore-mentioned Oliver book and Tony Russell's earlier Blacks, Whites and Blues (London: Studio Vista, 1970), which also warranted an accompanying eponymous vinyl album (CBS 52796) featuring the type of material heard here.  In addition, we get a delightfully informative chunk of Bengt Olsson's unpublished manuscript written in 1977, recounting the peripatetic career of 'Doc' Kerr, making fine use of extensive oral testimony.  The third section of the booklet analyses each track, giving its provenance (where known), details of the performers, context of performance and recording history, and any further details that will fit onto half a page, and flanked by appropriate photographic images.

Never in my memory have I ever been able to recommend a commercial issue without at least a few reservations.  I really have tried to find something to nit-pick about here, but have failed miserably.  This is, overall, perhaps the most enjoyable release for many a year.  If I had powers of persuasion that were able to reach through your monitor screen I would have you all rush out and buy it immediately.  Do it.  Get happy.  No medicine necessary.