Navvy on the Shore

'As you were close to the Favourite scene in the '70s and '80s' stated our editor as the criterion for offering this review to me - and I admit that I feel more confident reminiscing about the pubs of North-East London than analysing the remarkable and eccentric fiddle style of Danny Meehan.  At least it gives me a place to start.

By the time I knew it in the middle '70s The Favourite was already well established.  People spoke of earlier venues, most notably the Bedford where Michael Gorman and Margaret Barry had held sway and there were other venues close by at the time - e.g.  Bobby Casey leading a session high up the Holloway Rd - and other parts of London, like Cricklewood or Fulham, had their own Irish communities and strong music pubs. 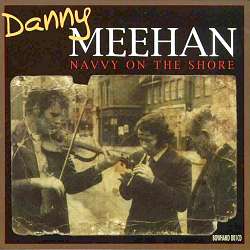 Yet somehow the special reputation of the Favourite remains as a great memory.  Music on Sundays, the main day, would begin around 12:30; Jimmy Power, Paddy Malynn and Reg Hall would open up.  After a few sets together Jimmy would play for 10-15 minutes and then Paddy would do the same.  By this time Jimmy would have surveyed the company and the rest of the session would be built around the musicians who were present, frequently ending with an enlarged band playing some sets of reels before Jimmy's traditional instruction to "Go home and have your dinner".

In those days pubs closed at 2:00 on Sundays.  I never experienced a day when the music continued on the pavement, though this CD cover bears witness to this as did Topic's Paddy in the Smoke - not to be confused with Globestyle's In the Smoke with its infamous cover picture of the wrong Favourite! (But don't dismiss the music on that CD just because of this faux pas.)

One factor that made the Favourite special was the social atmosphere, so much a part of good traditional music.  Another was the fact that all the leading Irish musicians had learnt their music in their home communities in Ireland before moving to England.  This meant that they played very strongly in 'the old style', to borrow Reg Hall's very broad but very useful phrase.  Danny Meehan is no exception despite his younger age which sees him now flourishing at the peak of his musical abilities after the majority of the musicians from the Favourite have passed on.

For a giant of a man who threatens to crush a fiddle just by picking it up and whose fingers are so large that they defy belief as they find room on the fingerboard, Danny has always been a very elusive character, hard to pin down and prone to periods of disappearance.  After weeks of questions about his whereabouts and heads shaken in response he would turn up in the Empress or the Victoria, often without a fiddle, and he would be back - for a while.  This is, of course, an indication of Danny's place in all the regional Irish communities and the time he spends in all of them.  It was not just the company at the Favourite that hold him in the highest esteem.

Jimmy Power said twenty years ago that the absence of a commercial solo recording of Danny Meehan was a major omission, so this CD will meet an expectant audience and there is no doubt that Danny has the background, the reputation, and the musical talent to make this CD release a very significant event.  Reg Hall's thorough liner notes (as seemingly inevitable on contemporary CDs as his piano was on the old vinyls!) give greater detail of this musical context and leave no stone unturned in citing the origins of the tunes and Danny's musical background.

21 tracks, comprising 18 reels, 5 jigs, 2 polkas, 2 barndances, 2 strathspeys, 2 airs, 1 slip jig, 1 lament, 1 march, and 1 piece (sic), recorded mostly in 1987 and 2000, usually with Dermot Kearney on guitar and brief appearances from Mick O'Connell on accordeon (one with Reg Hall on piano) make a CD of great variety in every sense.  There is a spontaneity in all the playing and the occasional rough edges are a part of that at which nobody could take offence.

A while ago a rumour reached me that Dermot was in London and hoping to bring Danny to The George in Islington.  I went along on the off-chance and Danny was laughing along in the bar about showing us what kept Johnny so long at the fair.  On the stand he played the jig and said "That's why Johnny stayed so long".  Reg Hall's notes state, 'This is a descriptive piece answering the question of what Johnny had been doing to have kept him so long at the fair.  Work that one out!'  I can't, but it is a clear indication that there is something quite unique about Danny's approach to his playing.  Eccentric?  Yes, gloriously!

I admit to having difficulties with the guitar as a backing instrument.  I know it is very common now in Irish sessions but this is music in 'the old style'.  Solo musicians like something behind them to fill out the sound, but whereas the 'traditional' piano (traditional since when?) also provides drive and uplift when played on the off-beat, the guitar smothers the tune with a blanket of bland chords.  Pianists can choose their notes, but the rhythm guitarist in conventional tuning is virtually compelled to play all the strings and therefore the conventional chords inevitably contain the thirds and push the tune into a major or minor when it might have preferred to remain uncommitted.  The guitar is - paradoxically - obtrusively dull.  This is no criticism of Dermot Kearney's playing which is as good as any and better than most (though I wonder about the chords in the B part of Con Cassidy's), merely a personal prejudice which I am pleased to say faded with each hearing just as Danny's playing became more exciting and at times bewildering.

What also galled me was the knowledge that Dermot is an outstanding banjo player.  On reflection I suspect I may have hit upon Dermot's thinking.  He is an energetic organiser and facilitator; he was essential in the last year of the Victoria, and I have no doubt that this CD would not have come to fruition without him tying down this elusive giant.  But this is a CD of Danny Meehan, not of the two of them playing as a duo, and so for this CD Dermot is a backroom boy with just the final track hinting at what might be next.  I certainly hope for a follow up with Danny on fiddle and Dermot on banjo (and Reg Hall on notes?)

Two good reasons, then, for buying this one straightaway: to enjoy this excellent and unique music and encourage the next release from Bow Hand, 30 Hardwick Crescent.  Sheffield, S11 8WB.