Tired of You Driving Me / A Black Woman Is Like a Black Snake / Aunt Caroline Dyer Blues / Papa’s Got Your Bathwater On / On the Road Again / K.C. Moan / Cocaine Habit Blues / Coal Oil Blues / You May Leave, But This Will Bring You Back / Memphis Yo Yo Blues / Memphis Shakedown / She Stays Out All Night Long / Meningitis Blues / Stealin’ Stealin’ / He’s in the Jailhouse Now / Taking Your Place / Ambulance Man / Beale Street Mess Around / Going Back to Memphis / State of Tennessee Blues / Insane Crazy Blues / Memphis Jug / Got a Letter From My Darlin’

This band was the subject of my Opus 1; the first published piece that I’d wish to acknowledge.  Memphis Shakedown, The Memphis Jug Band on Record (in Blues-Link issue 2, 1973), has the earnest pedantry and the naive enthusiasm of youth, and if the years have done no more than remove the adjectives from the nouns, that will be enough for me.  On the other hand, I did pick a good subject.  Don Kent and Bengt Olsson begin their notes with the sweeping assertion that ‘The Memphis Jug Band is not only the greatest jug band ever recorded, but is the greatest representative of traditional music of its time and place, crossing all boundaries.’  The first of these claims is marketing rather than scholarship; I wouldn’t argue the MJB’s greatness, but for me, relative positions on the ladder depend on what I’m looking for at any particular time.  Gus Cannon’s Jug Stompers found emotional depths in the blues that the MJB never quite plumbed; if there’s a more moving jug band performance than their Viola Lee Blues, I’ve yet to hear it.  The Louisville bands led by Earl McDonald and Clifford Hayes achieve at their best an extraordinary blend of sophisticated jazz and pungent alley music.  Among less extensively recorded outfits, the raucous Birmingham Jug Band, the crazily exuberant Jed Davenport’s Beale Street Jug Band, and Jack Kelly’s violin-led South Memphis Jug Band all have unique merits of their own, but I’m in danger of straying too far from the record at hand.  What about ‘the greatest representative of traditional music of its time and place’?  It depends, I suppose, on what you mean by greatness.  Kent and Olsson base their view on the breadth of the MJB’s repertoire, and the assurance with which they handled it, and it’s actually rather hard to argue with that.  If they never achieve the magnificent artistry of a Robert Johnson or a Blind Willie McTell, they certainly tackle blues, pop, rags, breakdowns, waltzes, blues-ballads and songster material with equal assurance.

But an extensive repertoire means nothing without an appealing delivery, both artistically and commercially.  The Memphis Jug Band’s long association with RCA Victor (1927 to 1930) was largely down to the talent spotting, organising and rehearsing skills of the band’s leader and business manager, Will Shade.  In Shade, Victor’s Ralph Peer clearly recognised a man who could be relied on to round up the available musicians and bring them along, usually to the temporary studios which Victor set up on their field trips to Memphis, but occasionally on the train ride to Atlanta or Chicago.  Shade’s collaboration with Peer seems to have extended into general talent scouting, and even co-production ‘Mr Peer and Will Shade present,’ the Victor logs sometimes note, the presence and absence of an honorific neatly encapsulating the racial attitudes of the time.

The band’s personnel was semi-stable, but Shade seems to have tried to recruit the best musicians on hand at any given time.  Himself apart, the most consistently present member up to 1930 was Ben Ramey.  In Blues-Link, I described Ramey as ‘one of the best kazooists ever to record’ and, oxymoronic though it may appear, that was a good judgment;

his buzzing, chugging rasp is a key ingredient in the band’s sound.  This is no surprise on energetic, up-tempo numbers, but the way that Ramey enriches the texture on songs like the wistful Stealin’ Stealin’ is much less predictable. (sound clip )  Harmonica, kazoo and jug (the great Jab Jones) are here playing versions of the same melody line, not quite in unison, and the unexpected beauty that results is reminiscent of Duke Ellington’s ability to create unusual textures and tone colours. 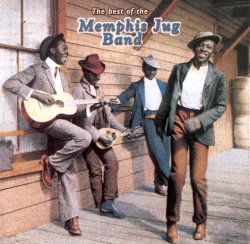 (This may seem like an absurd comparison, but the fact that Ellington’s instrumental and compositional resources were much more extensive than Shade’s does not in itself invalidate the point.)

The CD under review darts back and forth within the Memphis Jug Band’s recorded history, rather than going through it chronologically.  The latter approach makes it easier to discern changes in the material the band favoured at different times, and to hear how their sound changed as members came and went; but the MJB’s combination of stylistic versatility and high musical standards makes them ideal candidates for a carefully compiled selection of highlights.  Yazoo have certainly done the job well; there is a preponderance of Victor material, with only two titles from 1934, when the band went to OKeh, and radically reinvented itself, stressing manically extrovert breakdowns, with the fiddle of Charlie Pierce strongly featured.  This may simply reflect the fact that the 1934 recordings are less common, thanks to the effect of the Depression on sales;

it’s a pity that there seems to be no clean copy of Mary Anna Cut Off, a feature for Jab Jones’s barrelhouse piano, but any disc which includes the disciplined insanity of Memphis Shakedown has got to be a good thing. (sound clip)  There’s also plenty of the bubbling banjo-mandolin of Vol Stevens, and the ebullient singing of Charlie Nickerson; both of them are prominent on He’s In The Jailhouse Now,

which was credited on issue to the Memphis Sheiks.  They cleverly updated the old song, with references to band member Benny Ramey, and to the political corruption that made Memphis a wide-open town in the days of Prohibition. (sound clip)  (Local politician Edward ‘Boss’ Crump was among the Memphis Jug Band’s white patrons; in 1940, Crump took 1,000 Memphians to the races in Hot Springs, Arkansas by private train, with the MJB aboard to supply music for dancing.  Life magazine published some remarkable pictures of the band, which are reprinted in Mr Crump and the Memphis Jug Band by Guido van Rijn (Blues & Rhythm 62, July 1991).)

Other guest stars on Yazoo include Memphis Minnie, performing her grimly autobiographical Meningitis Blues (‘Then the nurses all began to stand around me, the doctors had done give me out; Every time I would have a potion, I would have a foaming at the mouth’).  Four tracks feature the blowsy, erotic voice of Hattie Hart, of which the weakest is Ambulance Man; her voice and Shade’s don’t fit well together, fascinating though the song’s Freudian obscurities are (‘Can’t you see I’m cut in the stomach?  That’s the reason I’ll mend your pain with ease’).  Better is the languidly sensuous Memphis Yo Yo Blues (‘Bring yo’ yo yo, wind the string around my thumb, Mama knows just how to make the yo yo hum;

Bring yo’ yo yo, daddy, and we will have lots of fun).  Best of all is her masterpiece, Cocaine Habit Blues, a strutting anthem to psychotropics which harks back to the days before World War I, when cocaine was legal and endemic in Memphis, and Lehman’s drugstore on Union the main supplier. (sound clip)

The Best Of The Memphis Jug Band is, of course, really some of the best of the Memphis Jug Band; it would be perfectly possible to compile another CD, almost as good, with 23 different tracks - Sun Brimmers Blues, Jug Band Waltz, Lindbergh Hop - well, you get the idea.  There is, indeed, a double CD currently available on Classic Blues, retailing for a tenner or so, and with good sound.  It does not, however, have Yazoo’s quality annotation and discographical details.  Equally, Frog’s three ‘complete in chrono’ discs are available for those who want to hear it all, and benefit from the remastering skills of John R T Davies.  For those who must have everything, there are four volumes on Document (with notes by the present writer), and a collection of ‘associates and alternate takes ’ on Wolf, which is far from the barrel-scraping exercise you might expect.  Spoilt for choice of Memphis Jug Band reissues - that can’t be bad!  Yazoo’s collection is a very good one; my only complaint is that the cover photograph has been ineptly colorised, and thereby robbed of its historical context, and its artistic and iconic power.  It appears to be nature’s law, however, that people will not buy records with black and white covers.  Go figure!