Most MT readers will be well aware that there are two distinct and separate traditions of English folk songs: that supported by the old traditional communities, and that created by the Second Revival. 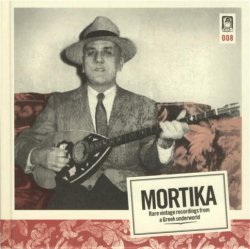 Similarly, should you be so naÔve as to mention the word 'folk' to almost anyone but another MT reader, you will be met with either incredulity, or the idea of a strange musical amalgam of Ralph McTell, Fairport Convention, The Spinners and The Wurzels.

That something similar has happened elsewhere should not surprise us, and it seems that this present CD has been issued in the hope of educating members of the 1970s' Rembťtika Revival into the idea that there's more to the genre than they may be aware of.  The existence of this 'Rembťtika Revival' was not something I was aware of but, as indicated, its existence seems entirely logical.  At least, I hope that this brief resumť is indeed a true reflection of the author's intent, because the densely written 50-page booklet advances several arguments which are not always terribly easy to follow.

Anyway, we have here 20 recordings from 1930 to the early 1950s - mostly from the Thirties.  Plus, there's one final track from 2000, by Nikos VrŠchnas who, according to the notes, was 'one of the very last to play in the old Piraeus style.  There is no trace of revivalism in his music'.  This, of course, should not lead you to expect to hear the likes of Harry Cox on this CD.  It should be made clear that these are (almost) all commercial recordings and, as such, subject to the mediation of record companies whose intention was always to sell records to the widest possible paying audience.  Similarly, rembťtika - like the Portuguese Fado - was essentially a cafť and club music, not one of the home and hearth, nor even the pub.  Singers and players, getting little or no income from their recordings in that era, would need to be polished performers to a greater or lesser extent, in order to secure gigs and another source of income.  Of course, this may not have applied to all, since the 'underworld' of the CD's subtitle was often a criminal one.  But what you hear here is the music of a subculture, not that of the folk.

One result of this is that it's a good deal easier to listen to for the uninitiated than say Hidden English or A Century of Song - to name a couple of English CDs having rather the same 'educative' purpose - might be.  Similarly, the technical standard of the playing and singing tends to be more obviously accomplished than we may be used to; this is particularly true of the playing (sound clip - O Mistirio - Ioannis Halikias).

Rembťtika is frequently described as 'the Greek Blues' and (as with fado), I've often felt a little let down by the lack of obvious passion on the part of the singers,

who seem to seldom get very near to the best of blues singers in this respect.  This is probably a result of the commercial pressures mentioned above, and partly, I have no doubt, to my relative lack of experience in listening to this music.  Whatever - here's Yeůrgios KatsŠros, and Nick Doneff on fiddle, with DervisŠki (sound clip), which seems to pretty well get there.

A further aspect of this CD's educative purpose is to show that rembťtika was not all bouzoukis and baglamas - so we also find tracks containing (although not always featuring) the violin, mandolin, mandola, guitar, cello, laouto, lyra, santouri and accordion.  This latter is represented here by Antůnios AmirŠlis (aka Papatzis), whose wonderful playing I have had cause to mention elsewhere in these pages (sound clip - O Bochůris).

You will by now have noted the superb quality of the sound in the foregoing sound clips, for which Ted Kendall is to be thanked.  Indeed, the whole production is a very high-quality job; the CD is delivered attached to the inside back cover of a well printed and bound conventional hard-cover book, which is a pleasure to hold in the hand.  It has sections on Můrtika, early Greek recorded music, drug themes, the instruments, a glossary, etc.  The song texts are in both Greek and English, and there are a lot of photos.  The notes, by Tony Klein, are always interesting, if somewhat difficult to fathom in places.

All that being said, it's a bit of a shame that more care hasn't been taken over the fine detail of the production.  For example, the Acknowledgements are indicated in the Index as being on p.51 - which is blank.  In fact, they lie hidden behind the CD on the back cover.  Further, when looking for more examples of the playing of the accordion master Antůnios AmirŠlis (Papatzis), I found no fewer that four different spellings of his name - all of which were different from that given on Rounder's Squeeze Play CD - and his tune, O Bochůris, is spelled three different ways.  Indeed, many names of both people and songs appear with different spellings in different places, and accents on letters seem to be applied in a fairly random fashion.

But, all in all, a very enjoyable CD, and well worth adding to your collection for a rather broader view of the rembťtika genre.  Whether it's distributed in the UK or not I can't say - but its available from 'Red Lick' at: www.redlick.com, Skivhugget in Gothenburg and MultiKulti in Stockholm.