Musical Traditions has taken on a monumental task in putting together its latest release, Far in the Mountains.  It’s the small but growing British label’s first venture into releasing American old-time music in CD format, and the recordings consist of four volumes (ie. CDs), packaged two per set. 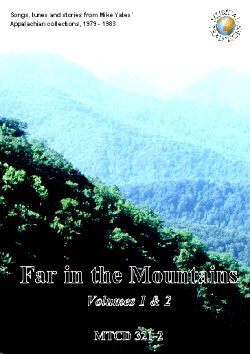 The project was recorded over the course of three trips between 1979 and 1983 by Mike Yates, who should be familiar to readers of this journal through his articles and reviews.  While no one release can represent the totality of a region’s music, this set gives a very good sampler of the various old-time traditional music to be found among the elderly white population of Western North Carolina, Southwestern Virginia, and East Tennessee during the period.  Within the collection there is a wide variety of material, including solo vocals; vocal duets; solo fiddle, banjo, and guitar; fiddle/banjo combos, fiddle/banjo/guitar trios, and stories.

Yates, who recorded and produced these volumes, lays out the agenda of his trip in the extensive notes, which are framed within his own personal experience.  First traveling to the region following a marital split and ‘looking for a new challenge and a new focus to my life’, he consciously followed in the footsteps of fellow Englishman and major folk song collector Cecil Sharp, who trod the same ground some 70 years before.  The trip thus became both a metaphorical and literal tracing of Sharp’s footsteps, as Yates encountered musicians who had stories of Sharp visiting their communities.  In accordance with both his own and Sharp’s intentions, this set shines the proverbial spotlight on the older repertoire and style from the region, and thankfully so; for by the time Yates made a return trip 15 years later in 1997, the majority of these musicians and their music had passed on.

This is not to mislead one to believe that had it not been for Mike Yates’s efforts, these musicians and their styles would have gone undocumented, because many of these performers have been recorded and had their music released elsewhere (for a small sample, see Old Originals,  Rounder 0057 & 0058, 1976, and High Atmosphere, Rounder Records, CD 0028, 1995).   However, not all of these previous releases are easily available, and the present volumes contain all new recordings made by Yates, some of the performances being quite obscure.  Additionally, these CDs include nearly all of two now-unavailable LP releases of this material: Appalachia - the Old Traditions, volumes 1 & 2, Home-Made Music LP001 and LP002, 1981; as well as a double cassette, Crazy About a Song, EFDSS VWML-07, 1983, plus some other previously unavailable material.

There should be a quick word about the presentation and packaging of this set.  I was happy to see the effective use of the DVD box format in which these CDs are packaged.  Within each two volume set, there is room for a larger than normal 36 page CD booklet.  The booklets contain many black and white and color photographs, as well as ample room for the notes.  The covers of both the DVD and booklets feature attractive color photos and the backs contain an easy to understand track listing (this isn’t always the case, especially with these larger sets).  One small criticism, however: while I had no trouble reading the liner notes myself, I can imagine that in another 30 or 40 years I might find myself squinting due to the small typeface.

The notes are good at cross referencing printed and recorded sources for the songs and tunes contained in this collection.  However, I was slightly surprised at the lack of certain musicological observations in a few cases.  For instance, no mention is made of banjo and fiddle tunings, and it is never noted that Benton Flippen only uses two of his fingers to note the fiddle - which explains his dramatic sliding technique.  Also, while the majority of singers sing solo, it isn’t pointed out when one duo sing in harmony, the only singers in the set to do so (another vocal duo featured sings in unison).  Finally, he states on page 26 of the booklet for volume 3 and 4 that Tommy Jarrell’s Devil in the Strawstack is played in the key of G.  The tune is actually played in the key often referred to as 'A-modal'.  A possible explanation for the comment is that for this piece Jarrell may have kept his fiddle tuned to standard GDAE, which was unusual for both him and some of his immediate contemporaries.

One point of confusion occurred on page 28 of the booklet to volumes 3 and 4, where Mike says in reference to fiddler Mitchell Hobson, 'It also came as quite a surprise to be told that in his youth he had played alongside Fiddlin’ John Carson, the Georgia fiddle-player attributed with recording the first commercial 78 of old-time music'.  However, this may appear to be self-contradictory since, on page 3 of the same volumes, he has cited Eck Robertson's 1922 recordings and Fiddlin’ John Carson's 1923 recordings. 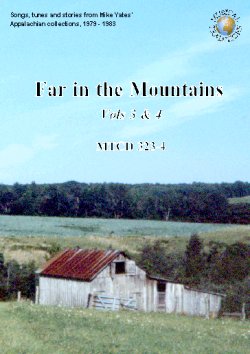 It is well documented that Robertson recorded the first old-time fiddle recording (see Blanton Owen’s note to the LP Eck Robertson, Famous Cowboy Fiddler, County Records, County 202, 1991) while John Carson is generally acknowledged with being the first old-time musician to sell shellac in great volume.  Robertson’s first recordings from his session in 1922 weren’t released until April 1923, just a few months before Carson’s first release.  Carson has at times been erroneously considered to be the first to record old-time music, and there is still some of this misinformation out there in available published sources.

Despite this nitpicking, the notes are well written and sprinkled with informative asides relating to the history of old-time music, ballad singing, and traditional music in general.  Yates comments in depth on the spread of songs through broadsides, chapbooks and eventually recorded technology and the effects of those changes on song transmission.  There are also historical anecdotes relating to the music which may or may not be well known, such as that John Bill Ricketts was an early circus entrepreneur for whom Ricketts Hornpipe was composed.   Also, Yates shares a little ballad theory in mentioning that ballads may have originated on the 17th century stage.  Finally, the notes confirm something which was being speculated upon in recent email discussion: whether the still active North Carolina musician Oscar ‘Red’ Wilson was the nephew of Steve Ledford, who fiddled with J E and Wade Mainer’s group in the 1930s and 1940s.

Solid liner notes can certainly enhance a consumers’ enjoyment of a CD, but ultimately it is the music and our relationship to it which matters the most.  As regards the music itself, this release will be satisfying to those interested in American old-time music from the region represented.  The collection includes both well-known and more obscure musicians.  Within, there are famous old-timers such as Tommy Jarrell, Doug Wallin, Stanley Hicks and Dellie Norton alongside less widely known personages such as Dent Wimmer, Pug Allen, and Mitchell Hobson.  One of the great benefits of the set is that when it comes to the famous musicians, lesser known repertoire is included so that material easily available on other releases is not duplicated.  For example, Benton Flippen, who is to this day known and celebrated for his blues-tinged fiddling, is featured playing three fingerpicked banjo pieces and just one fiddle tune.

Contrarily, it is a blessing that musicians such as Dent Wimmer are given a more extensive airing in this set.  There are far too many performers and performances here to comment on them all, but I was grateful to hear more recordings of the Sam Conner and Dent Wimmer fiddle/banjo duo.

Mr Wimmer played some of the hardest driving banjo I’ve ever heard, in a style characterized by a strong downbeat and few (if any) dropthumbs.  His style was made for dancing to, and his duet with Sam Conner on Don’t Get Trouble in Mind exemplifies that tradition (sound clip).  Additionally, two of his pieces, Half-Shaved Nigger and Salt Creek, are great solo banjo performances.  The latter is also related to a tune known as Muddy Roads by banjo players in West Virginia, which isn’t mentioned in the notes.

And while my own special interest lies first and foremost with fiddle players, I was more than pleasantly surprised at the lilting ballad singing of Eunice Yeatts MacAlexander.  [Musician Paul Brown, who acted as a host of sorts for Mike Yates during at least one of his trips,

told me recently that MacAlexander was reluctant to sing for strangers in general, but eventually sang into Yates’ tape recorder due to the fact that he had come so far!]  MacAlexander’s gentle style reminds me a lot of West Virginian Phyllis Marks.  She sings a lovely melody for Little Massie Groves which lingered in my mind long after I first heard it (sound clip).  I should point out here that Yates’ scholarship excels when it comes to the ballads.

Other musicians not well represented on current releases whose music was a highlight include:

caught my attention.  In this performance, a solo fiddle lays out the melody, then drops out to be followed by the two voices singing in unison, to a haunting affect (sound clip).  I like what Pug Allen does with Gold Rush, a tune associated with Bill Monroe.  It shows how a recent composition in a more modern style can be absorbed into a traditional style.  However, Allen insists that he knew the tune long before Monroe’s recording was released.  This is certainly possible as Monroe was known to take traditional tunes, alter them slightly, and rename them - a time honored practice in the history of the old-time record industry!

In a time when traditional music source reissues are plentiful, this set stands out for its wide breadth, packaging, and informative notes.  It will supplement the collections of those already interested in the music of this region or these performers, or it can conversely serve as a primer for those new to the music.  These four CD’s capture a broad musical snapshot of an older generation of traditional musicians just before the majority of them passed on.  In all, Mike Yates has done a fine job in documenting and presenting this music.