An Introduction to the English Mummers' Play

It must first be said that this is an extremely well-presented book - the first publication I've seen since the Society engaged Ledgard Jepson Ltd as its design consultants - and, it is to be hoped, a quality indicator of things to come. 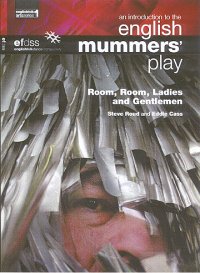 It should also be very interesting, dealing, as it does, with a subject I don't know very much about, but am interested in - having played Humpbacked Jack in the Longborough play with Old Spot Morris for a couple of years.

And the book is very interesting, containing a good deal of information which was new to me, presented in a clear and accessible way.  The word 'introduction' in the title should be stressed, for this is very much a book for those knowing little or nothing of the Mummers' Play, and doesn't go into much scholarly detail.  Indeed, the text makes it clear that the book is aimed partly at schools and groups of (presumably) young people interested in starting the performance of a play for the first time.  As such, I think it works very well.

The book has five sections, plus a Foreword and Introduction.  Section 1 deals with History, Origins, Heyday and Decline, and Mummers Today.  Section 2 covers the detail of the play and its performers: names of characters; types of performance; types of play; costumes; venues, attitudes and motives.  Section 3 deals with everything you need to know about starting your own Mumming Play tradition, whilst Section 4 covers finding material - and I would have thought, should properly have been subsumed within Section 3.  The final section presents the texts of nine plays from a commendably wide range of types and areas, plus the words and staff notation of Emma Vickers' Pace Egging Song.

The Foreword by EFDSS Strategic Director, Phil Wilson, seems somewhat at odds with the authors' apparent intentions.  Phil talks of his father's accounts of Mummers visiting the house, presumably in the early years of the 20th century, and goes on to recount his own experience as a member of Darlington Mummers, presumably in the 1970s.  Much of this is couched in rather hallowed tones, and is studded with words like mysterious or mystery (several times), ritual, forbears, finely-honed, serious and balanced, respect, custodians of heritage, faithful reproduction ...  He exhorts us to respect these traditions and hand them on faithfully, as we have learnt them, to enrich the lives of future generations.

This sounds all very well, except that, as you will have noticed above, much of the book deals with revival plays and their performance and performers.  Indeed, very little is heard from any members of the six currently existing traditional sides ... nor is there any evidence of the writers' appreciation of what might be learned from them.  This is an area to which I will return later.  It also seems to indicate that the 'New' EFDSS - despite words to the contrary - is still wedded to the idea of 'a correct original version' which must never be consciously tampered with in any way.

The Introduction broadly outlines what the book is about and how it's laid out.  More is heard of words like excitement, strangeness, wonder ... and we are told that 'In an attempt to provide some understanding of this excitement, we have interspersed the text with quotations from original sources'.  These quotations are mostly from 19th century observers and participants - again underlining the view that an old source is better than an new one. For me, these quotes seldom evoked much in the way of wonder, strangeness or excitement, I'm afraid.

It then goes onto point out that much that has been written about the Mumming Play has been erroneous - and this is dealt with in some detail in Section 1.  Despite demonstrating that the 'ancient, pagan, fertility rite, symbolism, sympathetic magic' nonsense is clearly nothing more than that, the authors deal, it seems to me, very gently with the erroneous scholars of the past - and make no mention of present-day publications peddling fakelore to the credulous Heritage market.

In Section 2 (Types of play and their distribution), it is mentioned that the plays existed 'almost all over the British Isles and a few places abroad as well'.  Obviously this is a book about the English Mummers' Play, but the text does seem to imply that this is a singularly English custom.  I would have expected at least passing references to similar customs in Ireland, much of Europe, the Caribbean - and elsewhere too, I shouldn't wonder.

There is very little here about the function of the plays - either within the subset of the community which performed them, or within the greater village/town culture.  The patronage of the wealthier members of the society, who made the performances financially worthwhile, is dealt with, but the role of such people in the village or town culture is not.  It does seem to me that - whether we're talking about drama, music or song - their function within the community is perhaps the most important aspect of any folk tradition.  What do the participants and the rest of their community get out of it?  Why do people persist in these cultural activities which are clearly anachronistic - and bereft of 'relevance' to modern-day life?  Obviously, they have discovered worthwhile benefits within them which elude the rest of us.  I'm interested to know what these benefits might be.

Section 2 ends with 'Attitudes and Motives', and I would have hoped to have found something interesting here.  Sadly though, the usual motives of 'money, drink and status' are trotted out (as with any similar discussion of Morris dancing), and the illustrative quotations are all from observers rather than participants.  It does seem odd to me that, whilst these three motives are the only ones actually reported from participants, nobody seems to have realised that they are the ones which almost anybody would advance when being questioned by a stranger.  Six traditional sides continue to perform these plays, in an era when the players almost certainly don't make any money out of it, they can probably afford to have a drink when they wish, and there's precious little status to be gained from the activity - often the reverse.  Yet they continue to perform.  Has nobody thought to ask them why?

Admittedly, meaningful answers wouldn't be offered at the outsider's first question - their motives are probably buried deep in the subconscious.  But discussions with those who have known them for half a lifetime would be likely to lead to some interesting and more useful conclusions than those on offer here.  The book contains a lot of excellent photos, generally well reproduced, mostly drawn from Doc Rowe's lifetime collection of such materials.  Doc - one of the book's editors - must have a clearer idea than almost anyone about the motives of people (traditional and revival) who get up to strange activities un-noticed by the majority of the population.  A shame he wasn't able to add some flesh to the very thin bones of this section.

But enough quibbling - this is a good book, and probably deals with its subject in quite enough detail and depth for its intended audience.  Anyone interested in starting the performance of a Mumming Play next Christmas will find all they need here, and useful pointers as to where to go for further information.

The book costs Ł12.95, plus Ł1.50 p&p, from the EFDSS - and purchasers can get the companion volume, The English Mumming Play: an introductory bibliography (for that further information), for only Ł3.50.  E-mail: library@efdss.org