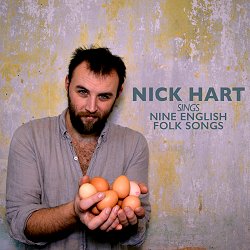 It was my son (a friend of Nick Hart's) who alerted me to this fine record ... as no review copy had been sent to MT.  Once contacted, Nick appologised and immediately sent me one, and an email saying 'Let me also say whilst I'm here, how grateful I am to you for making available so many of those wonderful recordings of source singers.  At least two of the tracks on that album were learned from MT compilations, as you may have noticed.'  Well - that's one way of ensuring a good review!

Martin Carthy and Nick Jones aside, I can't think of another English singer who can sing in relatively free rhythm against a guitar accompaniment.  And where he makes the guitar play free rhythm, Tom Moore on viola, makes a very good job of following.  Track 1 is Walter Pardon's Rakish Young Fellow, sung in very much the same way, but occasionally changing the same note that I would!  Track 2 is a combination of Danny and Harry Brazil's Bold Keeper (from the MT 3-CD set) - the task made more easy in this instance, since Danny and Harry both use the same tune, which is not always the case.

Track 3 is Georgie in a version from Cambridgeshire - the tune from very near Nick's father's native village and words from where his aunt lives.  Whilst I can completely understand his motivation for this choice, I have to say that this is a pretty standard version compared with the several very striking ones from the English Gypsy repertoire.  Well sung, though.  Track 5 is The Lakes of Cold Finn, a version from Clacton-on-Sea, again chosen for family connections.  Again though, there many more interesting versions about - and with far more interesting tunes than this one has.

Track 6 is A Ship to Old England Came, (Roud 1424) a very rare song that only Walter Pardon in the oral tradition seems to have acquired from a John Pitts broadside, published sometime during the first quarter of the 19th century.  Walter sing his first verse to a slightly different tune to the rest of the song, and Martin Carthy did the same on his rather extraordinary band-backed version on the CD Waiting for Angels.  Nick uses the 'normal' tune all the way through, but admits to being unsure as to whether he's made the right decision.  Personally, I think the more melodic variation the better - but then, I'm a Caroline Hughes and Cyril Poacher fan!

Sad to say that track 7 is not John Riley, but a version of Lord Randal with his name changed!  Again, there's a Cambridgeshire connection, as it comes from Ely, and has eels as the reason for the good Lord's demise - as opposed to poison beans (or even "pies and beans") as in some Irish versions.  Track 8 is the wonderful Riding Down to Portsmouth - a song I love to sing when I think I've had just about the right amount of beer.  Unfortunately, the wish to sing it frequently comes slightly after the 'right amount' of beer has been taken!  Nick uses the version from Mary Ann Haynes - a terrific singer, but not one who cares too much about making sense textually.  I far prefer the Tom Willett version.

So now we come to the final track - The Two Sisters (Child 10) and probably my favourite one of the entire nine.  Not that I'm a great fan of this ballad but, as presented here, I just love it.  Nick has done a composite job: one Scottish text, with the refrain from another, and a tune he's made up himself.  That refrain, from Ord, I think: 'Oh the gay and the grandeur / by the bonny banks of London' is utterly arresting!  I think he's made some alterations to the 'standard' text as well - I don't remember hearing 'What has he made of her nose ridge / all for his fiddle he's made a bridge' before.  His home-made tune works very well, too.

Whilst reviewing a Chris 'Yorkie' Bartram CD, I wrote: I really must say how much pleasure it gives me that records like this are being made in the 21st century - only five years ago I wouldn't have believed it possible.  And, despite all the young people who apparently love 'folk songs', very few seem to sing them as if they do.  Nick Hart does!