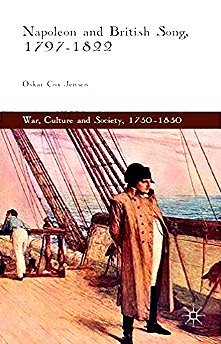 The appendix of Cox Jensen's Napoleon and British Song lists 382 songs from the period 1797-1822, and shortly after, that he regards as being connected with Napoleon.  This huge number is indicative of Napoleon's importance in popular British culture at the time.

This book explores popular British social attitudes during the Napoleonic Wars.  The introduction gives the academic background, while Chapter 1 explains contemporary popular song culture.  The meat of the book is in Chapters 2 to 4 which give details of songs and the attitudes they reflect, in chronological order.  Chapter 5, about song in Newcastle, is something of an appendage.

Drawing on examples from all over the British Isles, including some in Gaelic (Irish) and Welsh, Cox Jensen examines 'loyalist' songs, songs more sympathetic to Napoleon, and songs with no direct connection but which indicate attitudes to war.  It seems that loyalist songs originated predominantly in London, often as deliberate propaganda by people in authority.  The author is well aware that songs have a tune as well as words, and gives numerous examples of loyalist songs so badly written that they would have been impossible to sing.  This would help explain why they have disappeared.

Songs sympathetic to Napoleon were written for a number of reasons.  Many Irish people saw him as a potential liberator, despite the fact that an atheist was hardly the man for Catholic Ireland.  In Britain war disrupted trade and brought poverty, while peace merely added soldiers and sailors to the ranks of the unemployed.  Fear of France brought political repression as well, and in opposing Napoleon Britain embarrassingly allied itself with Catholic and autocratic Austria, Portugal and Spain.  Cox Jensen suggests that Napoleon was a focus for discontent, a way of attacking British policy and British social conditions, as much as a real person; and that many loyalist songs were attempts, largely unsuccessful, to counter critical attitudes.

Then there are more general songs, particularly those connected with the loss of young men to the press gang and the recruiting party.  These could be sung about almost any war, but they were popular at the time and indirectly critical of the British government that caused so much separation and loss.  They could also be linked to a very human Napoleon after 1815, separated from his wife and son and 'transported' to Saint Helena.

Cox Jensen divides society and culture into 'polite' and 'popular' (he rejects the word 'folk'), but shows that attitudes to Napoleon do not fit squarely into those divisions.  And while London produced more loyalist songs, and more distant regions, such as northern England and Scotland, more songs sympathetic to Napoleon, we cannot make simple geographic divides, either.  There were conflicting views across classes and locations.  And one thing this mass of data should do is lay to rest the idea that songs favourable to Napoleon all or mainly come from Ireland.  That is manifestly not so.

Cox Jensen acknowledges Vic Gammon's The Grand Conversation published here, as 'the one serious article written specifically on Napoleon in British song' (p 126).  Gammon finds a discrepancy between the contemporary (negative) and subsequent (positive) image of Napoleon in song.  Cox Jensen in contrast suggests that there was very much a (contested) positive contemporary image of Napoleon, though he does say that not one negative song appeared after 1815.  His copious examples show that he is right.

Of the 382 songs listed in the valuable appendix, only 70 have Roud numbers, and five of those are followed by a question mark.  Of these, some have remained popular (such as The Banks of the Nile and The Wounded Hussar) while others have only one Roud entry (Mr Mayor, Roud 8783, collected from Henry Robson, Northumberland, 1814).  One problem with the appendix and the index is that the reader cannot look up a specific song in the text.

The book is admirably proofread; I could only find an extraneous indefinite article.  The writer, however, has a habit of using 'sung' instead of 'sang' (at least four times) and 'begun' instead of 'began'.  Also, it is probably too much to hope these days that such an expensive hardback book would be properly bound, rather than glued together.

Cox Jensen writes clearly and accessibly, making this book a pleasure to read.  He does assume considerable knowledge of history, such as the Coup of 18 Brumaire and the Peace of Amiens, but this does not hamper the less knowledgeable reader, and this is after all a history book, not a song resource book.  It is an essential contribution to understanding a large body of song which has been strangely unexamined, and as such is highly recommended.  There remains the small matter of the £50 price.

(Although the review doesn't mention it, this book was published in 2015 - the 200th anniversary of the Battle of Waterloo.  As it so often happens in this infinitely connected world, Cox Jensen was unaware of Peter Wood's book The Green Linnet : Napoleonic songs from the French Wars to the present day, also published, and reviewed here, in 2015, which would appear to cover much the same ground ... and costs only £12.50!  Ed.)