Culture, generally speaking, is the complex of tangible and intangible artefacts through which we humans express our relations with what we perceive around us.  These artefacts often indicate what our position is as regards to our circumstances, and how that position may change.  It is through the position we take in this world that we define our identity.  Especially potent and affective markers in this respect are music and language.  Both have a strong aspect of performance, of welling up on the spot, on the spur of the moment.  Both betray a direct link with the background and the perspectives and values of the people engaged in it.

This has been true for youth culture ever since the inception of rock 'n' roll and the sprawl of subcultures that have over the years branched out from it.  This is equally true for ethnic groups, in their native country and outside it.  In particular, after emigration, music and language constitute an (often nostalgic) link with home.  But, fluid as they are, they also incorporate traces of settlement in the new environment.  Anyone with close-up experience of people who moved to a new country will confirm that they will seek out others sharing the same background with whom they can speak in their mother tongue - and when they do, you'll hear phrases from their second language dotting the conversation, often inflected according to the rules of the first.  They may found circles to enjoy something of their cultural roots together.

This is the inspiration for the music on So Sabi and Mademoiselle, Voulez-vous Danser?  As their respective subtitles indicate these CDs highlight two different immigrant groups living in the north-east of the United States.  What both have in common is that they offer a glimpse of ways in which these groups express the ties to the culture from which they originate - as they perceive it.  This last caveat is significant, because with their adaptation to a new cultural environment their own notion of what constitutes their cultural identity is likely to diverge from what it actually was in their original country, and from how things have developed there.

So Sabi was recorded on the occasion of the two-day 1996 New England Cape Verdean Folklife Festival, held in Boston. 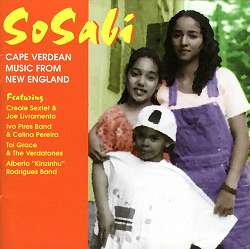 In an especially set up studio four bands were recorded live before a small audience.  All musicians have been professionally active in that part of the country for several years, with the exception of singer Celina Perreira who lives in Portugal.  There is a neat dividing line, with two bands on either side.  And it's time that acts as the watershed - the time they have been living in the US.

Toi Grace & the Verdatones and Creole Sextet & Joe Livramento are veterans of the scene.  They play amplified instruments and add saxophone to the line-up.  In the Creole Sextet a drum kit is used as a substitute for hand held percussion.  The musicians have clearly been influenced by mid twentieth-century jazz and Latin - the ball-room entertainment repertoire that they have been earning their money with.  Ivo Pires who accompanies Celina Perreira with his ensemble, and the Alberto 'Kinzinhu' Rodrigues Band are strictly acoustic string bands - harking back, as is said in the liner notes, to "the sound of a Saturday night on Cape Verdean back roads".

The violin leads the way, while strummed guitars and cavaquinhos (the Portuguese precursor of the ukelele) add a sprightly bounce (sound clip - Maria Nha Dimintina, Rodrigues).  This gives their music, however melancholy it may be, a light touch, a delicate transparency.

To me, the sound of these latter bands is most appealing.

Their playing is less smooth, perhaps, but that makes it gain in directness and spontaneity.  Perreira's slightly hoarse voice is wonderfully matched by the violin with which Pires follows her in her footsteps, as in Minina o Marisenson (sound clip),

a song which refers to horse racing traditions on the Cape Verdean island Brava.  This is immediately followed by Amor da mae (sound clip), in which Vickie Vieira, backed by Creole Sextet, sings about motherly love.  The text and her rendering of it are clearly geared to evoke a strong emotional reaction.  On the other hand there is an ease about her singing, about the Latin jazz chord progressions and about the instrumental solos that make it sound acted rather than felt.  Acted professionally and skillfully - but acted nonetheless.  In the final track Rosinha, Toi Grace & the Verdatones clearly steer towards the middle of the road - a strangely bland and uninspiring number to top off a CD.  But then it is a standard, something of a hit song among Cape Verdean communities far and wide.

The setting of Mademoiselle, Voulez-vous Danser? is quite different.

Much of the music recorded seems to be intended for intimate social gatherings in which all people present share in the music making. 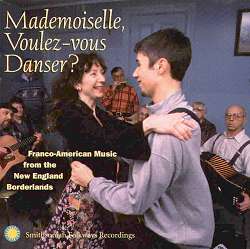 Some cuts were actually taped during such soirées (sound clip).  The songs and dances reflect the history of francophone Canadians who settled in New England towns and cities a 150 years ago to work in the flourishing textile industry, and along the northern borders to set up small farms.  They also reflect more recent developments, such as the rise in popularity of contradances that prompted musicians to learn and play the melodies of different communities which might require their services.  Another factor is the reorientation on cultural heritage as part of the folk revival in the 1960s; and as a reaction to the erosion of Frenchness, due to intermarriage and to the prevalence of English-speaking culture.

This variety of angles makes this CD cover a wider range than So Sabi.

On the one hand it demonstrates how these one-time Acadians incorporated dance tunes of Celtic origin in their repertoire.  These are typically played on the violin.  Sometimes the accompaniment solely consists of clogging as in Reel St Hubert (sound clip), though it can be considerably more elaborate.  The instrumental conclusion of J'entends le moulin, for instance, is underpinned by an inventive counter melody on the piano.  The various musicians and groups to be heard on this album show how diversified the link to French-speaking culture can be.  Most of them are indeed descendants of settlers from Canada, often brought up in households where French was the first language.  Others grew up speaking English, and started to retrace their Acadian origins later on in life.

But some have no French connection whatsoever.  The Reel St Hubert

is played by a fiddler who built up a large repertoire of dance tunes that he could play at social gatherings of communities all over New England.  The Nightingale group, who play J'entends le moulin (sound clip), don't have a French background either.  They perform a "blend of Northern music", as they themselves describe it.  Their renderings of French tunes are well received by Franco-American audiences, according to the liner notes.  This cannot only be a matter of appreciation for this band's interest in this particular heritage, but also to the life they breathe into it.

Eclectic indeed is Lucie Therrien's take on the traditionally Acadian Le grain de mil (sound clip).  Overdubbing her voice and adding a bodhrán frame drum she infuses the song with a smoothness and a Celtic influence that make it come close to New Age musical ideals.  As the text says, "she considers herself part of the important process of moving the tradition forward through musical innovation."  That, of course, is the paradox of traditional culture in a nutshell.  On the one hand, culture is the result of interaction between any group of which the members share certain characteristics with what goes on around them - inevitably encompassing adaptation to circumstances.  On the other hand, if culture is a set of characteristics that defines the identity of such a group, the group may be in danger of losing that identity when giving up too much of what characterizes it, of what distinguishes it from others.  The only people able to judge whether or not that is the case, are the people of that group.

That leaves us with an intriguing question that refuses to be solved unequivocally.  It also leaves us with two CDs that present sonic manifestations of the complexities surrounding that question.  Two CDs that are as distinct as they are pleasurable.  Would So Sabi be an album that you could easily treat a wide audience to?  Mademoiselle, Voulez-vous Danser? would probably appeal more to already interested listeners.

I must add that the latter album maintains the high level of the entire Smithsonian/Folkways collection when it comes to the information accompanying and contextualising the music, while Rounder's CD is particularly meagre in this respect.  If you didn't know how Cape Verdean music has derived from Portuguese and African lineage, you will be none the wiser after immersion in this album.