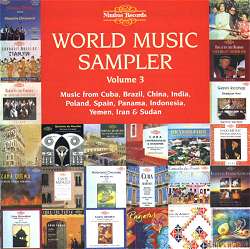 Many of the latter are created by those with classical and jazz backgrounds, rather than a sole grounding in folk tradition.  As such, some may find some of this material a little too polished and arranged.  However, the broad selection certainly features some gems.

The great bulk of the material featured here is from Latin America, offering just a small insight into the wealth of musical varieties and range of developments in traditions in parts of this region.  The Panamanian Los de Azuero show a dynamic meeting of European (via immigration) and African (via slavery) traditions with the rough-edged fiddle and recorder melody lines and some rootsy call and response vocal performances.  Moving over to Cuba, the Rotterdam Conservatory Charanga Orchestra successfully evoke a time gone by, with their classy 1930s dancehall sound, far from the big band salsa that is so pervasive today.  Piping flute, lush sweeping piano, and sumptuous strings are underpinned by the percussion section’s ubiquitous clave rhythm .  The Orquesta Típica from the Rotterdam Conservatory perform the sedate and respectable European-style contradanzas and danzones, taken to the Caribbean by the colonisers and, in combination with African percussion, a hugely popular form in the 19th century in Cuba.  The trova ballad song tradition from the Oriente region is captured by Trio Yagua with their sweet harmony vocals and sedate, nimble-fingered guitar and laúd accompaniment, and sultry acoustic son (the main song form of Cuba) comes from Familia Valera Miranda.

Representation from Brazil comes in the form of some fantastic forro from Camarao.  Forro is the lively accordion (santona) -led dance sound of north-Eastern Brazil, driven by triangle and drum ... not a million miles away from some of the sounds of Louisiana.  Brazilian string quintet Quinteto da Paraiba play Musica Armorial, which embraces “the wealth of influences and melodic material - from Iberia and Africa - that have permeated the popular genres of Brazil’s north-east”.  To this unaccustomed ear, the rich, expansive soundscapes of these modern pieces seem to feature strangely Scandinavian, ringing harmonies.  Also from a classical training, I assume, Andrea Dalto, sings from the modinhas repertoire, a popular mid-19th century love song form.

Both classical traditions of India and China are explored, as well as a modern Indo-jazz-fusion track and one from a contemporary Chinese composer.  From the classical repertoire of India comes the delightful, evocative bansun (bamboo flute) playing of master musician Hariprasad Chaurasia; the sombre, deep vocal of Uday Bhawalker singing in the dhrupad genre and the impressively speedy vocal flights (tanas) of Padma Talwalkar.  Italian Gianni Ricchizzi plays the marvellous bulging-sounding vichitra vina, an ancient fretless stringed instrument played with a metal or glass slide (the precursor of Hawaiian and modern slide guitars).

From China comes the elegant ancient religious music from Naxi province and from the North, the beautiful sound of the Buddhist Music Ensemble, starring the dramatic tone of the double-reed pipe, guanzi.

Amongst other noteworthy moments on this compilation are the passionate flamenco singing of Tina Pavon, some lively, ambient sounds from a Javanese bamboo gamelan ensemble and some wild fiddle music from the Tatra mountains of Poland.  Over a background of churning chords, and a slow increase of tempo, Gienek Wilzek’s melodic lines and intricate ornamentations truly soar.

Appreciating the more rootsy end of most traditions has meant that there is not quite enough dirt and raw feeling on this sampler for my own personal taste ... but there are some outstanding and memorable moments.  To contradict myself somewhat, I love the (more cerebral) decadance of the Cuban dancehall number above everything.  But in general, I suspect this is aimed at a more refined palate than my own!