In the world of Balkan music, this is a rather different record; not the typical Balkan blare of bagpipes, brass, accordion, but an astringent palette of mainly bowed strings û violin, three-string viola, cello, and cimbalom. 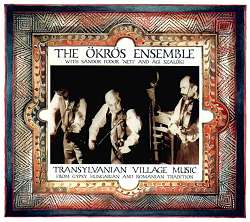 The ensemble is led by Sandor Fodor, known as 'Neti', one of the great Kalotaszeg violinists, and a senior member of the Hungarian music scene (born in 1922, two years after the Hungarian cession of Transylvania in the Treaty of Trianon).

Transylvania has a mixed heritage; it's been part of both Hungary and Romania, and is still in many ways disputed territory.  (Indeed it was a Hungarian Lutheran pastor from Transylvania whom some credit with having kicked off the revolution that broke Ceaucescu.)  And as elsewhere in Eastern Europe, the Rom musical tradition is also strong.  All three traditions are represented on this record, but the Hungarian tradition predominates (as you'd expect from a Hungarian band).

Is the tradition authentic?  Well, at least one piece is; the lament presented here as Szaloki Agi Keservese was recorded by composer and ethnomusicologist Bela Bartok in 1937.  In line with the traditional performance ethic, though, what we hear on the disc is part free-style improvisation.  And there is a fair mix of genres including the friss (fast csardas), csardas and legenyes.

I found it quite difficult to get on the right wavelength with this disc.  The fast stuff isn't flashy as it is in much Balkan music; there's no klezmechanics or violin virtuosity.  Even in the fast sections of pieces, the speeds seem to be quite deliberate, and the accompaniment occasionally therefore sounds a bit plunky.  At one point, the cimbalom seems to come badly unstuck from the rest of the ensemble, so that it sounds almost as if a negligent sound engineer let a bit of a Soviet realist piano concerto creep on to one of the mixers.  But I've heard this before in Romanian music û the cimbalom seems to have carte blanche to investigate its own harmonic mode.

However, persevering with this recording pays dividends.  Probably the most characteristic tracks are the slower ones, particularly the songs û two out of three of which are laments (no lyrics or translation provided, unfortunately).  It has a particular rather tart melancholy which stems from the prevailing minor mode, a tendency to ornaments that scoop up from below the note,

and a very slow moving bass, almost (not quite) too slow to maintain the rhythm.  There's a particularly moving moment in Szaloki Agi Keservese when the voice and violin take the tune together, the ornaments alone diverging and introducing dissonance. (sound clip)

The Íkr÷s Ensemble has none of the outrageous virtuosity or joy of some of the other Hungarian bands I've heard.  For instance, comparing this record with the Muzsikas Blues for Transylvania and Bartok Album, the style seems much less rhythmically punchy, Neti's violin style less aggressively bowed and with much less attack on the notes than Peter Eri's or Mihai Sipos's.  The sound of Muzsikas is also much fuller, pushing the strings for expression û a squealier sound, though I don't mean that in an uncomplimentary way.

Neti tends to gain his effects through ornamentation and gradually swelling the note, rather than through stress û for instance the slow trills at the start of the hajnali on track 9.  In short, Íkr÷s is less punchy, more pure in tone. (sound clip)

I suspect this might not be a popular CD for that very reason.  But it does have a great, rather understated charm û one born of control and technical mastery, rather than the more Dionysiac qualities more often associated with the music of the region.

The presentation, unfortunately, is rather 'folksy' in the great style of eastern European tourist offices, though I did admire the wonderful moustaches that seem to be part of the band's uniform.  It's particularly annoying not to have lyrics when we're told that one of the songs can symbolise peaceful coexistence between Rom, Romanian and Hungarian "since the lament is sung in all three languages"à   (Having travelled a little in Romania, I have to say I find the idea of Romanians living in harmony with the Rom somewhat na´ve à )   The notes to the first track tell what a csardas is, but don't say where this particular pair of tunes come from, or how it was learned.  This is particularly disappointing when you consider the very high level of informed comment provided on Rykodisk's issues of Muzsikas.