Introduction and Notes to the Tunes by John Purser. Modern Edition by John & Barbara Purser
Page Scans and CD-ROM Creation by Nick Parkes

Self published, no number

Comes the digital revolution, comes invaluable resources such as Steve Roud's Folk Song Index, or the reproduction of the Child Ballads.  Yet computer-savvy musicians or scholars, handling machines powerful enough to take them to Mars and back, begin to want that much more from their shiny CDs or CDRoms. 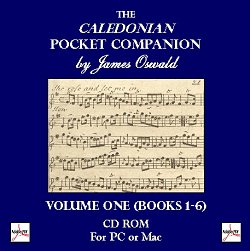 It is indeed fine to have scanned images of rare and important originals, finer still to have these converted into digitised forms that can be handled and searched, but what about some treatment of all this newly arriving raw material?

On this particular CD-ROM, each book of James Oswald's 18th century Caledonian Pocket Companion is treated separately but with numerous links between the books for ease of use.  In addition there are full colour facsimile reproductions: black and white facsimiles more suitable for printing; modern computer typeset versions; and highly detailed notes and sources concerning every tune.  It has a good index as well as a reproduction of the original general index to the volume, and a new introduction to the book and its publisher by John Purser, the well-known composer, broadcaster and Scotland's Music (Mainstream, 1992) authority.

What's the importance of the material, presented for the first time since it was published from 1745 onwards?  Perhaps the best way to explain would be to suggest that James Oswald (1710-1769) is the Scottish equivalent of Playford.  His twelve books of the Caledonian Pocket Companion (Volume Two comes out next year), containing 550 tunes, is one of the most important collections of Scotland's traditional tunes ever assembled.  The collection was a source of inspiration to Robert Burns and many more musicians and song-writers, but the sheer richness and variety of the contents, together with the fact that the originals are rare and difficult of access, may partly explain why nobody has previously attempted to republish and annotate the work.

Although as the extensive notes demonstrate, Oswald clearly drew upon earlier publications and manuscripts as well as his own memory, the actual selection of the tunes was his own, and included many from his own earlier publications and compositions.  Scottish tunes naturally predominate in a 'Caledonian' collection, making the Companion one of their most important early sources; many make their first ever appearance in any form.  They vary very widely from battle songs and laments to The Mucking of Geordys Byre, from The Bonny Earl of Murray to She's Sweetest When She's Naked, not to mention the first ever transcription of a waulking song, Hi ri ri ri ho.  But also included is material from music composed for the contemporary theatre and London's famous public garden concerts, for Oswald was deeply involved in the theatrical world of his day and published theatre music; many of the tunes in The Beggarĺs Opera are in the Companion.

The man himself was just as remarkable, rising from his humble birth in a Scottish East coast fishing village to become chamber composer to George III (Oswald is thought to have composed God Save the King), eloping with a first wife and, after her death, secretly marrying the widow of the owner of Knebworth House, but more than that, as John Purser rightly says, he continues to give constant delight from 'the beauty of his music, the outpouring of melody, the vivacity and skill of his writing, and its wit as well as its pathos'.  Oswald, he rightly claims, speaks straight to the heart.

This is an invaluable source for musicians as well as scholars and historians, especially as it makes the fullest - and friendliest - use of modern computer technology.  (Nick Parkes has also created useful CD-ROMs of the likes of Orpheus Caledonius and the 1805 British Musical Miscellany).

It is the result of a long labour of love by two private individuals, unsupported by either grants or institutions, (would that the latter concentrated on such work) and well worth its modest price to have such fine material in everyone's hands for the first time in over 250 years.  It's available from Nick Parkes, Conifers, Low Street, East Drayton, Retford, Nottinghamshire, DN22 0LN.  Price ú11.00, including UK p&p (plus ú1 for shipping outside the UK).