Traditional Fiddle Music of the Ozarks, Vol 3: Down in the Border Counties

Like several other albums in this North American Traditions Series I approached this one with a little trepidation, seven fiddle players, thirty five tunes, and all packed into seventy two minutes.  While I am all in favour of value for money (some companies, usually the larger ones whose sole interest is money rather than music it seems, still stick to the limitations of vinyl i.e. using only about fifty percent of a CD's full capacity), I did think that this might seem a little cramped and the tunes too brief. 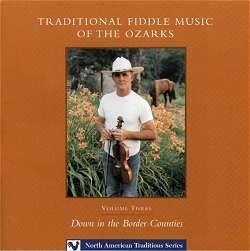 I guess I've spent too much time playing back-up guitar at old time sessions where the tune can go on for ever.  However my fears turned out to be unfounded, the shortest tune is one minute twelve seconds but even at that it doesn't feel uncomfortably short.

This is the third and final CD in the series 'Traditional Fiddle Music of The Ozarks' and concentrates on Taney and Ozark counties in southern Missouri up against the Arkansas state line.  Many of the people who settled this area came in from the hill regions of Tennessee.  The notes claim that "the Ozarks are home to some of the best traditional fiddle music to be found in America, but it's rarely heard outside the region".  On the evidence of this one album alone I for one would not disagree with the first claim.  As for being rarely heard outside the region I would have to admit that by comparison to the Appalachians this is true, but there are a number of people within my circle of friends who have been listening to such people as Cyril Stinnet, Art Galbraith and Lonnie Robertson for a number of years.  Robertson in fact came from the centre of the area featured on this album but during his many years spent playing over various mid-western radio stations he developed a smoother style.  It is true though that apart from Galbraith who had a release on the County label, most if not all other Ozark music has not been widely available.  County should again be given credit though for their excellent pioneering 3 volume vinyl set 'Echoes of the Ozarks' of re-issued commercial recordings first issued in the nineteen seventies and since up-dated and re-issued on CD.

It seems that although many of the musicians on this album are acquainted they have all developed their own variations in style and preference.  Jim Beeler for instance who plays the opening track counts in with a 1, 2, 3, 4 and bang! you're straight into a real driving number.  Jim's interest is in playing a rhythmic rather than melodic style, one that will get people dancing - he plays for both country and square dancing - and this tune certainly proves the point, two minutes and fifty four seconds where it's virtually impossible to keep your feet still.  For another storming tune Beeler plays a version of Clucking Hen like I've never heard before, a great rhythmic version of a session favourite.  Then there is Finley Creek Blues which according to fiddler Bob Holt derives from the playing of Lennie Abshire a one fingered fiddle player who used to play over radio station KWTO.  Which finger and which hand we are left to ponder.  Guitar player Gordon McCann however was informed that it was composed by a fiddler named Zed Tennis.  To add to the confusion (?) it seems that Bob Holt plays his own version rather differently to Jim on his own CD 'Got A Little Home To Go To'.  To my ear this sounds like a slowed down Fiddlin' Arthur Smith tune.  Or could it be the Roy Hall and Tommy Magness tune Natural Bridge Blues?

I must own up to being fascinated by all this, the variation in tunes, words and titles caused by mis-hearing, not hearing, not knowing, and possibly not caring, and also each musician's own idiosyncracies that result in giving us such a wide variety of material to listen to.  All down to what has become known as the 'folk' process.  Another interesting tune played by Beeler is Old Joe in Dischord (fiddle tuned AEAC# for all you fiddlers) which certainly gives a new twist to other Old Joes.  Likewise his Pretty Polly is not the tune normally associated with the ballad of the same name, it is more as co-producer Mark Wilson points out "a slowed down version of Pretty Polly Ann with pizzicato".  Several of the musicians on this album admit to learning tunes from commercial recordings but it seems that Beeler is completely oblivious to that source.

From Beeler who has six titles to Bill Conley who has just one Goodbye, My Honey, I'm Gone.  Although Conley lives in a different area of the Ozarks to that featured here and also by the way plays clawhammer banjo, his grandfather also named Bill was a well respected fiddler from this area but he died two or three years before the present Bill was born.  Young Bill came along in 1946 and learnt the banjo from his father and uncle as a young boy but recently he has been learning fiddle tunes from the above mentioned Bob Holt.

Alton Jones has seven tracks on this disc and his style is distinctly 'bluesy' in approach even including a version of Kokomo Arnold's Milk Cow Blues.  However, I don't believe that this tune is uncommon among white fiddle players.  I've heard Alvin Crow from Texas do it in a western swing version and I suspect that Bob Wills probably did it too.  Included among Jones's tracks is yet another Lost Indian - just where did they all go?  Jones born in 1918 did at one time play for dancing but considered it too much like hard work, playing one tune for fifteen minutes non stop was a little too much.  Subsequently he claims he crafted his music more for listening.

The youngest player here is Noel Scott, 48 years old at the time of recording in 1997.  He drives a truck for a living and claims he just fools around on a few instruments for fun.  He also claims not to be a fiddler, he likes rock and roll and points out his collection of Allman Brothers records, but he comes from a traditional Ozark family and it seems gets great enjoyment out of playing at social gatherings.  He has six tracks one of which The Branson Rag he describes as a 'riffing' tune, if that means something to you fiddle players that's fine but if not then you'll have to buy this disc to find out, it seems that this term is used to describe the short repeated phrases which many of the area fiddlers use.  As with Jim Beeler above, Noel it would appear is quite oblivious to commercial fiddle recordings.

I could go into more detail about the other fiddlers here but it would be pointless, they all have something to offer and personally I only find one track out of the whole bunch that I don't really enjoy, and that's a slightly shakey waltz.

On the majority of the tracks the fiddle is backed up by one or sometimes two guitars, open chords, not closed in the manner of Texas style back up.  Only one has five string banjo accompaniment; a tune which incidentally celebrates the notorious hanging judge of Fort Smith, Arkansas.  The notes are excellent and I must admit go a long way to explaining how the same tune can sound so much different in the hands of two different musicians.  Mark Wilson has again done a truly great job here in both the recordings and the generous booklet where he states that the two counties featured here gave him and co-producer Gordon McCann "as rich a harvest as any they have encountered in the south".  If you are aware of just how much material Wilson has recorded over the years (and here I would refer you to an excellent article in a recent issue of the Old Time Herald) then you will appreciate that this is no idle claim.  The notes alone give me almost as much pleasure as the music itself does.  Another in a truly wonderful series of fiddle music.