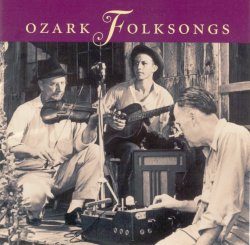 Vance Randolph was born February 23, 1892 in Pittsburg, Kansas, and died November 1, 1980 in Fayetteville, Arkansas.  He moved to Missouri in 1919 and the rest of his life was spent in the Ozark mountain region.  He is one of America's most important folklorists and folk collectors, yet compared with the Lomaxes, for example, he is relatively unknown.  This is almost certainly because of the intensely regional nature of Randolph's work.  One could compare Gavin Greig being less famous than Cecil Sharp in Britain, yet modern scholarship would favour the intensive working and understanding of a locality as exemplified by Greig and Randolph.  Norm Cohen in his essay on Randolph's life in the booklet explains the significance of this localised working:

Because he live in the Ozarks for most of his life (successively in Pineville, Mo, Galena Mo, Eureka Springs Ark, and Fayetteville Ark) he came to know his informants on a personal basis and consequently was able to obtain much more from them than could an outside collector who only passed through the region briefly.

Randolph enjoys enormous academic respect but he has also become an icon in his own region amongst those who would seek to maintain the cultural identity and the unique spirit of the Ozark region that is disappearing in a modern nationwide hegemony.

Randolph's work may have been narrow geographically, limited as it was to south-west Missouri, north-west Arkansas and parts of eastern Oklahoma and Kansas.  However, his view of what was worth collecting was very catholic and wide ranging.  He insisted on the importance of collecting tales, dance tunes, songs, jokes, folk speech, superstitions, oral history, games and expressions as they were originally told.  His collection ran into many thousands of items.  In terms of the songs that he was interested in, again he took the widest view. 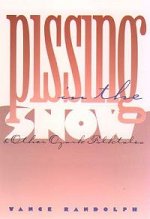 There were survivals from British immigration through Victorian maudlin ballads, and minstrel show songs to Old Timey band music.  Some of the songs had been pop standards of the first decades of the twentieth century, others were clearly learned from early hillbilly records and radio shows.  Was it therefore all-inclusive?  Interestingly, Norm Cohen thinks not: 'However, it was still a product of its day in that all the bawdy songs were systematically excluded.'" Hmm - sex was out, but bodily functions were in, as the title of one of his books of folk tales seems to suggest.  In an internet search, I came across a reference to a Randolph book entitled "Blow the Candle Out : 'Unprintable' Ozark Folksongs and Folklore which seems to indicate that there was a change in his mind on this subject with the passing years.

The huge corpus of his collecting work spanned about 35 years from the early 1920s.  He kept very full and comprehensive field notes that have been of great value in compiling the excellent song notes provided here.  Based on his fieldwork, Randolph wrote over twenty books and numerous articles for publications including the Arkansas Historical Quarterly, Ozark Folklore, and the Journal of American Folklore.  Outstanding amongst his publications was the four volumes of Ozark Folksongs published between 1946 and 1950.  All the work over the first twenty years involved Randolph writing out the texts with a variety of 'musically literate' associates noting the melodies.  An initiative in 1941 was to change this.

In that year the Archive of Folk Culture, headed by Alan Lomax, commissioned Vance Randolph to undertake a recording expedition in southern Missouri and northern Arkansas.  The folklorist recorded many of the songs - in some cases performed by the same singers - that he had already collected from in the late 1920s and 1930s.  The result was approximately two hundred aluminum discs that have been copied on tape and are accompanied by field notes and correspondence.  Several Library of Congress recordings include selections from the collection.  It seems that Randolph had some mixed feelings about this approach and never really bothered to train himself in the use of this technology.  Cohen spends some time lamenting this: 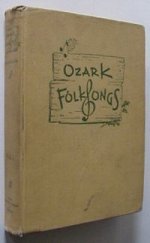 In spite of the great musical value of the treasures that Randolph captured in aluminum grooves in that eleven-month period, few of the recordings have been commercially released.  In large part, the reason must he attributed to the primitive recording equipment - even by the standards of what was available at the time - and also Randolph's inexperience in using it.  One only need compare the sound quality that RCA Victor and Columbia field engineers could achieve when recording hillbilly and blues singers and instrumentalists on location in hotel rooms throughout the South to see how woefully inadequate Library of Congress equipment - especially in the hands of totally inexperienced operators like Randolph - proved to be.  Lomax had offered to meet Randolph in Knoxville, Tennessee, for a training session in the use of the equipment, but Randolph demurred.  (For a fascinating account of Randolph's machinations, read Cochran's delightful biography.)  Probably also, the aluminum originals have not held up with time as well as the metal parts from wax masters used by commercial recording companies.  As a result, the recordings often sound scratchy and marred by surface noises, not to mention the occasional rustling of papers, barking of dogs, sounds of trains and automobiles, and other extraneous background noises that were the inevitable results of recording on front porches and kitchen tables.  Nevertheless, I believe that there is sufficient musical value to override the technical deficiencies of the recordings - though I have avoided selecting any of the most aggravating examples.

Well, the listener will obviously have to make their own judgments about the veracity of these statements, but the overall impression given by the 35 tracks included here is that he is being a bit harsh on Randolph.  Many worse things have been perpetrated in the course of folk song collecting.  One only has to think of Ken Stubbs' conversations going on whilst his informants struggle on manfully with their often very fine performances.  Portable machines, even minute minidisk recorders, change the atmosphere of a session radically.  It could well be that Randolph was well aware of this and felt uncomfortable about the intrusion of the tape recorder and microphone into his acknowledged good relationship with his informants.

Whatever the truth of the matter, there is some very fine stuff here, so let us, at last, get around to examining it.  The finest singer represented here is Charles Ingenthron,

a sure singer with five admirable songs.  He shows his fine ballad story telling quality particularly in The Old Man in the Country which is a interesting version of The Twa Sisters - the miller gets hung just for finding the body, which seems a bit unfair - and in Young Charlotte (sound clip).  Another very pleasing ballad singer is Dortha Freman whose two songs are very different, but again reveal her to be a great one for putting over ballads.  She delivers a truly beautiful Lord Thomas, surely one of the finest versions of this widespread ballad as well as a fine cowboy tale.

The most striking of the travelled British songs is this snatch of the May Song with Lillian Short sounding as though she comes from the deep south of Dorset or Devon rather than Missouri (sound clip).

Elsewhere there is singing that seems totally rooted in the American mountains.  The unison singing of the McDonalds (sisters?) makes really arresting singing both for the tightness of the unison performance and the subtle pauses and held notes that break up the rhythm (sound clip).

A measure of the all-embracing nature of his collection is that unison singing like that can be placed alongside guitar-accompanied pieces going on about The Halls of Montezuma and some pretty heavy sentimentality.  So 'all-embracing' perhaps, but on the evidence presented here, Randolph seems to have been working exclusively with white informants.

Jimmy Denoon's guitar playing is technically far better than one would expect from an untutored hillbilly, and in fact he did go on to become a prominent country music session man.  All the fiddle playing is enjoyable, with that of Lon Jordan really standing out (sound clip - Leather Britches).

Nearly all the music heard here has never been available on commercial recording before.  It seems self-evident that this is a good representation of a very important and comprehensive collection.  Without revealing any really outstanding performers, it also makes very enjoyable listening.