The fiddle is the most common instrument in Swedish music - so much so that the word Spelman (traditional musician) is often translated to mean fiddle player.

Tom Paley - is not a Spelman, but an American Traditional musician now based in London.  He is better known for his banjo, guitar playing and his singing, with amongst others The New Lost City Ramblers. 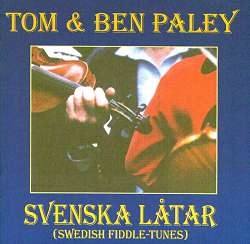 In 1975 he took up the fiddle, and was influenced and inspired by a much earlier period of residence in Stockholm.  His son, Ben Paley, started much earlier in 1973 at the age of 6˝.  He has worked alongside the likes of the Levellers, Chris Wood, Michael Nyman and is rated as one of the best young British folk musicians.

Both father and son have become authorities on Swedish traditional music or folkmusik - something that is very much alive in Sweden.  And so it seems it has an enthusiastic following in the UK too - where it shows no obvious signs of diminishing.  In fact there are pockets of musicians and dancers who have become quite adept at mastering the Swedish dance and fiddle techniques, much to the amazement of some of Sweden's finest.

Sweden boasts a considerable amount of traditional musicians and groups most of whom probably hope for an outlet here.  There are also numerous recordings available, and so one may question the significance of this particular CD.  Well, considering that Tom Paley's achievements in Swedish fiddle playing has meant that he has earned a bronze Zornmärke, (one of the few non-Scandinavians to do so) - this certainly goes along way in proving that this recording should not be ignored.

The purpose of the Zorn spelmansmärke ['fiddler's medal', but literally: 'musician's medal'] is to retain and increase the interest in Swedish folk music.  This means, among other things, that new generations should be encouraged to pass on and create understanding of the music and the playing styles inherited from the fiddlers of the past, in a tradition-preserving way.  Ultimately it proves, both inwards, within the fiddlers' community, and outwards towards the rest of society, the bearer's competence to perform folk music.

Svenska Lĺtar which translates literally as Swedish Tunes, is more of an anthology; much like a personal photo album with each picture carefully placed and lovingly selected.  The sleeve design is eyecatchingly good using yellow text on a blue background, and the accompanying notes are impressive and highly informative - detailing the musicians' backgrounds and outlining the Swedish folk music tradition.  It's clear that both Tom and Ben Paley's knowledge and regard for Swedish folk music goes deep.  My only gripe here (if I dare have one) is that in spite of all this, I am frustrated by the sad lack of proof reading.

The album features a large number of polskor (plural) - the most common type of tune in Swedish folk music - some waltzes, Gĺnglĺtar (walking tunes) and marches.  The polska, with its unusual beat played in ľ time is not like the waltz, as the polska has the emphasis on beats 1 and 2 instead of the waltz's emphasis on beats 2 and 3 (listen and you'll discover).

The recording has been done in Joe Locker's house.  I don't know who Joe Locker is, but the idea of it sounds very warm and intimate, which is exactly how this CD translates.  The playing is delightful, and although I don't play fiddle myself, the rhythms are well supported by strong bowing techniques which is an intrinsic part of Swedish fiddle style.  A particularly outstanding track is Mycket Brännvin (Loads of Firewater) where, by his own admission, Tom Paley risks making a fool of himself by singing in Swedish.  Apart from being too far back in the mix, it actually works very well indeed; the real surprise comes when he goes in to his English translation and I cannot for the life of me say that I like it, as the English language doesn't fit the rhythm of the melody very well.  But hey, it's a drinking song (a subject close to most Swedes) so who cares:

I guess it beats chasing fair maidens with a roving eye.

Tom and Ben Paley wanted to make a recording of music they love and want to share it.  They have achieved much with this, but who the actual audience will be is hard to know.  It's not the most obvious starting point for getting in to Swedish folk music, and does not carry broad appeal.  For the most part fiddlers and Swedish folk music enthusiasts are most likely to gain from this.  That said, I wouldn't rule this CD out as a British Standard in Swedish traditional folk music.