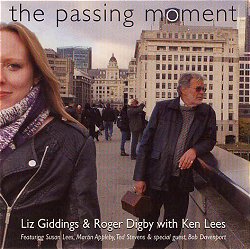 Through a glitch in Roger's list of review copies, I didn't get sent this CD until some weeks after the rest of the magazines ... allowing me to see what everybody else has said about it before putting pen to paper.  And it appears that no reviewer has been able to get past the end of the first paragraph without using the word 'delightful'.  This should not surprise anyone who's heard Liz and Roger playing recently - or noticed the 'with Ken Lees' phrase at the end of the personnel list.  These three fine musicians playing together is altogether delightful!  But that's not all we get.

Have you noticed that many/most 'solo' recordings these days include a personnel list longer than many bands!  That's not quite the case here, but a number of friends have been added to the mix - and not always to advantage.  No one in their right mind could fault Susan Lees on piano on a couple of tracks, but Ted Stevens would probably not be my first choice as percussionist, though most of his contributions are inoffensive and fairly well back in the mix.  But the skulls are amongst my greatest hates in the hitting stakes, even when played well - and Ted's contribution to the sacred Gloucester Hornpipe set get me hitting the 'next' button every time.  This is a shame, as I find this track very interesting ... a couple of tunes I love, but played in quite a different way to how I approach them; nice!

Martin Appleby, who's done a really excellent job of recording this CD, adds bass to five of the tracks.  There's absolutely nothing wrong with what he plays, but it seems to me that it's exactly the same as the bass note of the piano vamp - and so doesn't really contribute anything extra.  This just leaves us to consider Bob Davenport's songs.

Now I would never say that any singer was 'past it' - most of the traditional singers I love were fairly elderly when recorded - and I can certainly understand Roger's desire to include one of his oldest friends and long-term musical partner.  However, Bob's contributions here make for very uncomfortable listening - to me, at least.  Track 4, The Old Mill Stream, is played far too fast - Bob is forced to gabble, and any idea of emotional content is lost half-way through the first verse.  Track 8, Down by the Sally Gardens, fares equally badly - though in this instance it's Bob who forces the pace, and shouts more than sings much of the song.  Track 12, Tramps and Hawkers / The Old Changing Way, is the best of the three sets, although I still feel it's sung a little too fast - and Richard Thompson's Old Changing Way just runs straight on from the repeated first verse of Tramps and Hawkers, which sounded as if it was going to be the end of the track, making for a very odd moment.

On the plus side, it's always good to find tunes you don't (yet) know on a new record and, of the 27 played here, I'm fairly sure that I've only heard about 9 before - and that only about 3 or 4 of those could be called well-known.  Further, though most of the repertoire on show here is either Irish or Scottish, the playing is profoundly English in character throughout.

The Notes, though short, are often also delightful - particularly Roger's first page on 'the tradition'.  All opinions I share - but couldn't have put so eloquently.  So I was a little saddened to hear three of Charley Batchelor's shoteezes on the final track played as 32 bar tunes, when (if memory serves) Charley always kept them to 16 bars - to their advantage.  The Press Release which accompanied the CD describes 'their passion, talent and distinctive accuracy' - which made me smile, since accuracy is not a word which would ever be found in descriptions of my own playing!  However, petards are there for the hoisting - and on track 10, The London Scottish / The Gypsy Hornpipe, that vaunted accuracy is overcome by taking the first hornpipe at slightly too swift a pace.  Ah well - we're all human!

But, all in all, this truly is a delightful record - and would have been even more so had it limited itself to the three main protagonists, and avoided the occasional need for overdubs.