Charley Patton (the Masked Marvel) and Others

Screamin' and Hollerin' the Blues

Before I start, I must, unlike so many of our elected representatives, declare an interest.  Charley Patton is generally regarded as the father of Delta blues, the fount from which sprung the likes of Son House, long time associate of Patton, Robert Johnson, Tommy McClellan, and the young Muddy Waters.  To me, and the late John Fahey, founder of Revenant Records, he is more... he is the King of the Delta.  What sets Patton apart from the rest is the quality and variety of his material.  The subject matter encompasses not just the usual songs of woman trouble but songs about natural disasters (High Water Everywhere, Devil Sent the Rain), the difficulties of a small scale agrarian economy (Mississippi Boweavil Blues, Pea Vine Blues) and the injustices inherent in a basically racist society (Joe Kirby).  As well as blues, Patton's repertoire includes ballads (Frankie and Albert), minstrel songs (Love My Stuff) and spirituals (Lord I'm Discouraged, I Shall Not Be Moved).  Charley Patton uses the blues as a vehicle for documenting his own intensely personal experiences.  He seems to live the songs he is singing.

Charley Patton was born, probably in 1891, in Hind County in Central Mississippi of mixed black, white and native American stock.  By the turn of the century he was living on Dockery's plantation in the Delta and would surely have witnessed, and even taken part in, the early development of what we now know as the blues.  From about 1914 onwards he was earning his living as a professional musician so his style was fully developed by the time he made his first recordings in 1929.  He recorded on just the three occasions, twice in 1929, and once shortly before his death in 1934.

Pictures of Patton usually show him as a rather dapper, slight man.  This hardly tells the full story.  His lifestyle was more like that of the archetypal pre-war blues man hard drinking, hard living (he spent at least one period in jail) and many times married (some reports suggest that he had as many as eight wives).

For those of you wondering about the title of the CD, can I add a few words of explanation.  Although Screamin' and Hollerin' the Blues and Mississippi Boweavil Blues were the first two titles recorded by Charley Patton for the Paramount record company at their Richmond, Indiana studios on the 14th June 1929, they were actually issued as his third 78, some three months after they were recorded. 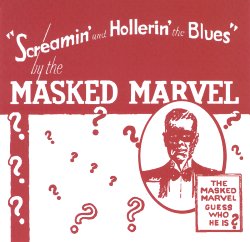 It seems that the results of issuing Pony Blues and Banty Rooster Blues, with their raw Delta style, followed by the two part Prayer of Death had left the record company confident about his ability to sell records.  On the 14th September 1929 an advertisement was placed in the Chicago Defender by Paramount advertising the issue of his first two titles as Paramount 12805.  Readers were invited to buy the record and then try and identify the mystery singer (The Masked Marvel) featured on it.  It presumably was a successful ploy as the record was reported to have sold more than 5000 copies, very high for a blues recording.  There is no record of how many buyers successfully identified the singer as Patton.

It is hard to know how to review this CD since it is not available in the shops, but is a sample review copy drawn from a forthcoming 7 CD box-set, The World of Charley Patton to be issued this autumn.  Based upon Revenant's past record (they have recently released the 4th Volume of The Harry Smith Anthology), we can expect a very handsome package.  This one is expected to include, as well as the CDs, a reprint of John Fahey's 1970 biography of Patton, extensive notes and song transcriptions, reproductions of adverts for and labels from Charley Patton's original recordings.  The first 5 CDs include all surviving recordings that Patton is known to have been involved with.  This means all his recordings as a solo artist, those where he is credited as an accompanist (with Henry Sims and his last wife Bertha Lee) and other recordings made at the same sessions.  The 6th CD, Charley's Orbit, features songs from other artists who influenced or were influenced by Patton.  The final CD includes interviews with those who knew him.

Judging by the standards of the sample CD, the transfers to CD by Chris King from the original 78s have been performed with loving care.  Given that some of the recordings are now extremely rare and that the original material may have been very unpromising, some of the results, such as Willie Brown's M & O Blues, are quite remarkable.  To my ears the producers have struck just the right balance between reducing the surface noise and retaining as much as possible of the original performance.

I am a little puzzled about who the package will be aimed at.  Patton is already well represented on CD.  Document, almost inevitably, have The Complete Recorded Works in Chronological Order on 3 CDs (DOCD5009-5011).  There are 2 good compilations from Yazoo, (King of the Delta Blues, YAZCD2001 and Founder of the Delta Blues, YAXCD2010) and earlier this year Catfish issued The Definitive Charley Patton (KATCD180), a 3 CD set including all 58 surviving Patton Recordings.  None of these include the peripheral material, so clearly the package under review is the most complete.  Real Patton enthusiasts and completists will want this, and I hope that the interviews, of which only one short example is included on the sample CD, will shed more light on the man and his music.  They could well be the most important part of the entire production.

Minor reservations apart, the box-set could be the most important blues release of the year.  Now the bad news.  According to Revenant, the likely US selling price for the set is $100-125.  This is likely to translate in Sterling to at least Ł110 so if, like me, you fancy the package, you had better start saving now.  The likely release date is in October 2001.  I don't know anything about Revenant's UK distribution but you will certainly be able to buy it from Red Lick.

This was a pet project of John Fahey's for many years.  Sadly he died earlier this year so was never able to see it to fruition.  Full marks though to Dean Blackwood and his colleagues at Revenant for completing the project.

Charley Patton: Some These Days I'll Be Gone (take 1); Elder Greene Blues (take 2); Jim Lee Blues, Parts 1 and 2; Mean Black Cat Blues; Jesus Is A Dying-Bed Maker; Elder Greene Blues (take 1); When Your Way Gets Dark; Some These Days I'll Be Gone (take 2); Heart Like Railroad Steel; Circle Round The Moon; You're Gonna Need Somebody When You Die; Henry Sim: Be True Be True Blues; Farrell Blues; Tell Me Man Blues; Come Back Corrina.