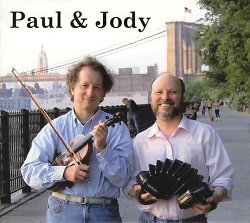 I was a little surprised to receive this CD to review because I know Jody Kruskal as a virtuoso concertina player, whose previous recordings have highlighted the technical fireworks of which he's capable - and not contained much of what I would consider traditional music, in stylistic terms.  Accordingly, they've not been reviewed here.  This present offering is rather different.  He wrote, in a note accompanying this CD: 'I don't know how you define 'traditinal' but by any definition, I believe my latest CD would fit in with that classification better then any other ...'

And he's right.  Bearing in mind that American traditional music is a very different beast to what we have in England - so that many of the tunes heard on the CD have known composers - this is definitely tradidional music!  Stylistically, Jody reins in his technical fireworks - but retains his exceptional skills - to produce some very exciting playing.  In particular, his bellows control is startlingly fine; he's able to make the anglo-concertina sound like a mouth organ (or, more accurately, a chromatic harmonica) bending and blurring notes,

so that his playing could never be mistaken for that of an English or even Irish player.  Here's a snatch of track 1, (It's My) Lazy Day, from Lester 'Smiley' Burnett. (sound clip)  As you can hear, Jody's vocals sound as authentic as anyone could wish.

Paul Friedman's fiddling is also very accomplished, yet here I find it generally less pleasing than the 'tina.  I suspect that this may be as a result of the choice of songs and tunes on this particular CD.  Many of them find the fiddle doing much the same sort of accompaniment - that yak-a-tak-a style that I associate with the Balfa brothers - which leaves no gaps; no silences to point up the melody.  Paul can, and does, play in other styles on some tunes, but in general I find his playing on this CD as a whole rather too busy for my taste.

As regards the songs and tunes, there's a pretty wide selection, from some impressive sources:

Bascom Lamar Lunsford; Tommy Jarrell; Dillard Chandler; and Jehile Kirkhuff, among others, contribute some great material.  One small problem I have with the running order is that, after a good start with track 1, the next four tracks all sound a little similar.  But then track 6 arrives!  Rivers of Texas - what a great song! (sound clip).  No source is attributed for this, so I must assume that it's traditional in the English sense.

I'd noticed in the credits that Bill Peek plays banjo and piano on some tracks - and I always feel that a piano adds a certain something which no other back-up instrument can, no matter how well played.  So I was beginning to wonder where the piano was on this CD ... and then track 7 happened!

Danz Terpsichore comes from the playing of Pennsylvania polymath Jehile Kirkhuff, who Paul visited and played along with in the 1970s.  What a brilliant tune - a 3-part polka/hornpipe, which I shall attempt to learn immediately! (sound clip)  The piano really kicks the music into life, and the playing of all three participants is just perfect.

The rest of the CD proceeds happily with a rather good Rain and Snow from Dillard Chandler, a very quirky Cuckoo's Nest from Jehile Kirkhuff, and ends well with Montreal pianist Mario Loiselle's Reel Harmonie.  A nice piece of work all together - and I'd buy it just for Rivers of Texas and Danz Terpsichore.  You can, too, from: www.jodykruskal.com or www.cdbaby.com