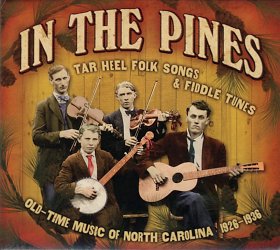 The latest gem from the US label Old Hat has arrived on my doorstep, wearing its parameters of style, date and geographical span proudly on its sleeve, and I couldn't be happier.  With many thousands of pre-war old timey tracks in my collection it is a rare occasion when something turns up that I don't have already.  Five tracks here are new to me, one contributory factor being the extensive recorded output of Cranford, Miles and Thompson, known collectively as The Red Fox Chasers.  Other than a long-deleted vinyl album devoted to them on County, little else has been released commercially.  Document's Old Time series was brought to a halt when Johnny Parth retired, and the complete recordings in chronological order which was that label's distinctive hallmark failed to include this group.  Further, the Chasers were one of the blind spots the late Keith Summers had when buying more than a hundred hours of dubs from Joe Bussard's massive collection, with the result that even with the two items on this CD I still lack almost a score of their issued titles.  Which is a pity, given that the music is very fine indeed.  The two tracks heard here were both, at those dates (1928 and 1931), recent compositions by members of the group, and are worthy examples of contemporary music harking back stylistically to an earlier age.  Mountain sweetheart is cast in the parlour 'heart song' mould, popular during the previous half century, while the other tells the tale of notorious bandit Otto Wood, who cut a crime swathe across the region before succumbing to a violent end on New Year's Eve, 1930.  But this is not the well-known song set to a jaunty tune, recorded a month later by vocalist Walter 'Kid' Smith accompanied by Charlie Poole cronies Odell Smith and Norman Woodlieff on fiddle and guitar, and released under the nom-du-disque Carolina Buddies (another of their tracks is, however, featured here), and covered three decades later by Doc Watson.  The composers have set their text, clearly derived from the extensive contemporary newspaper coverage, to a more stately tune which had previously carried a widespread narrative concerning the outlaw Jesse James (the version with the 'dirty little coward who shot John Howard' chorus), thereby offering an easily recognisable signifier to the audience.

Further tales of law breakers, either those of man or God, feature here, including that of the brutal murderer Tom Dooley - in the much reissued version by GB Grayson and Henry Whitter (Grayson's uncle actually brought the real villain to justice, in 1866) - and the unfortunate Will, the Weaver, whose adulterous exploits stretch back a century earlier and three thousand miles eastwards across the Atlantic.  But this is not the sole overt British influence evident here.  Leaving aside the square dance tunes, many of which were culturally transplanted by emigrant musicians, Howard and Dorsey Dixon (actually from South Carolina, but adoptive 'tar heels'), with Mutt Carey, make good use of the old lining-out form during the chorus of their sacred number Are you sure?, which certainly raises my goose bumps.  The ubiquitous railway network supplies a bedrock for a number of items.  The Blankenship Family sing about working on it.  The Cauley Family and Mainer's Mountaineers tell of two trains, that of the New River and longest, respectively.  And Dock Walsh's heroine loses her very life in one of the most memorable and disconcerting couplets in the whole of the recorded corpus : 'Her head was caught in the driver wheel, her body I never could find.' Other vocal forms bringing great variety to this CD include the widespread, but almost mock Antebellum African-American style used by the Proximity String Quartet, an unidentified but almost-certain-to-be-white ensemble, on Lindy.  The instrumental square dance tunes, marches and rags are exemplary.  Johnson City Hop, by the Carolina Ramblers String Band, is unusual in alternating fiddle and harmonica melody lines.  Charlie Poole's North Carolina Ramblers, under their Highlanders pseudonym, take us briskly and excitingly through Richmond Square [dance].  The Grady Family lead us smartly through the march Carolina's Best, and the prolific Greene, Foster and Ashley (issued under many pseudonyms, but here as the Blue Ridge Mountain Entertainers) offer a characteristically solid Honeysuckle Rag.

The photographs, in the main unfamiliar, are wonderful.  The caption to one of a pair taken at a fiddlers' convention held at Blowing Rock, North Carolina, in circa 1925 gives the names of some of the musicians shown, but annoyingly fails to identify which is which.  Fiddlin' John and Rosa Lee Carson can, however, clearly be seen ; she is to the right of centre, holding a guitar by the head, while her father stands immediately to her left looking at the image.  The centre page of the booklet cuts out two of the musicians seen on the larger photo reproduced on the inside of the outer sleeve (if you get my meaning), and identifies them as Monroe 'Rob' Greene and Bert Jenkins.  Both can be clearly seen on the group shot mentioned above.

A one per cent black mark to Old Hat for taking two steps backwards and failing to include discographical details.  For a booklet so concerned with context this makes no sense at all, especially as almost no more space would have been needed.  At least those who care to know can consult Tony Russell's comprehensive published discography.  But the remaining ninety nine per cent offer up as kudos for a very fine looking and splendid sounding production.  This is the third consecutive release on the label that I've had the pleasure of reviewing for this site, and look forward to many more.  Now, if only they would issue CDs more frequently than one every two years I would be a happy man indeed.  Spot on.