Music of the early Irish immigrants, recorded in the USA

If you like old-fashioned (ie. pre-war) Irish music, or want to know what the music was like when it was danceable, in the days before reels were played at break-neck speed, then this may well be for you. 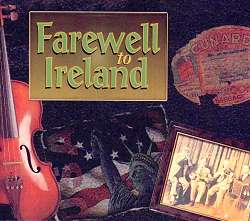 This 4 CD set (for the price of one!) contains 80 tracks, the complete listing of which can be found in our Traditional Discography.  They span Irish music from reels to comic songs, by way of hornpipes, jigs, barndances, and all things between, including a mazurka by the great Hugh Gillespie, and a set of marches from Martin Beirne and his Irish Blackbirds that sound almost as if most of King Oliver’s band are in the line up - world music indeed!

There are also many fine solos and duets from the likes of Michael Coleman, Paddy Killoran, Jimmy Morrison and Paddy Sweeny, piano solos by the wonderful Eleanor Kane, songs and band numbers from the multi-talented Frank Quinn, John McGettigan’s Irish Minstrels, Dan Sullivan’s Shamrock Band, the Flanagan Brothers, and others too numerous to mention.

There are many treats here and much food for thought, though you may, like me, have some of these tracks on other compilations.

A useful booklet by Ron Kavana completes the set, containing biographical notes on the performers, and a potted history of the Irish recording scene in the USA before the Depression.  An excellent production all-round, with which I have just one small quibble - there are no recording dates.